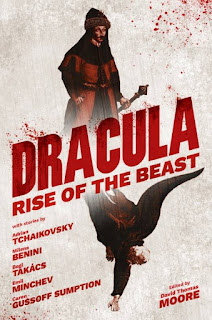 Dracula: Rise of the Beast is an interesting and almost undefinable book. It is not a conventional fiction anthology, as all of the stories presented are held together through a joint framing device, but neither is it a mosaic novel, as the stories do not altogether cohere. That said, it’s a fascinating collection that talks back—not just speaks, but explicitly talks back—to Bram Stoker’s classic 1897 novel. Stoker’s Dracula was a figure as exoticized as he was threatening, playing on a number of English cultural anxieties ranging from immigration and anti-semitism to homosexuality and women’s roles in the new industrialist age. Moore and his stable of writers here—Adrian Tchaikovsky, Milena Benini, Bogi Takács, Emil Minchev, and Caren Gussoff Sumption—respond not just to the fictional figure and his historical counterpart, but to the cultural conversations around him as well.