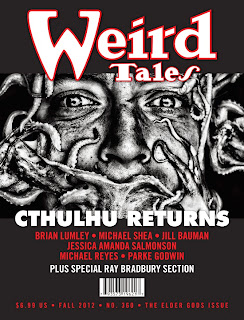 I admit to being a sporadic consumer of news, particularly when it comes to publishing, even more particularly when it comes to the SF/F publishing world. Every few months, it seems, another idiot straps a load of bullshit and dynamite to their chest, determined to have their say and blow up the internet in the process. As author Genevieve Valentine recently put it on Twitter, “Oh, the SF community, where the Venn diagram of catching up on news and wanting to light things on fire is a circle.”

It’s important to confront the idiocy, the prejudice, the racism and the misogyny and bullshit. Hats off to the folks that manage to swim through those swamps without getting bogged down or eaten by crocodiles. But for the sake of my own sanity, I try not to get consumed by it. Maybe this explains why I was genuinely excited when offered a chance to review the two new issues of Weird Tales. If I’d been paying attention, I would have known that the magazine had recently gone to hell in a startlingly flashy way.