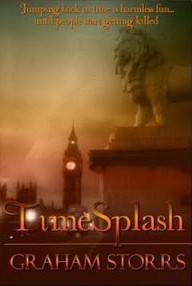 A crime thriller set in the near future, TimeSplash centres on a new form of terrorism, a destructive form of time-travel, and the efforts of the two young protagonists to prevent a catastrophe that will devastate a European city. Graham Storrs’s previous published works have been thoughtful short stories in magazines such as Concept and Bewildering Stories (and indeed here in TFF), but this is his first published novel. The publishers, Lyrical Press, deal mainly in ebooks, and their stable encompasses works from a wide range of genres. Although this novel is marketed both by Lyrical Press and Storrs himself as science fiction, the plot more closely resembles the sort of cold-war spy thriller beloved of beach-readers.

The core of any time-travel story is the nature of time. Is time a mutable thing, a flow of cause and effect which can be altered by time travellers to affect their own present (as in Chuck Palahniuk’s Rant); is it a fait accompli, in which travellers can only observe or at most become part of a preordained chain of events (as in the film Twelve Monkeys); or is it something in between? In TimeSplash, time is envisioned as closer to the latter, something like a glass of water into the depths of which bubbles can be pushed through a scientific straw. The bubbles rush back to the surface and behind them the waters of time heal up just as they were, but the ripples they leave on the surface are devastating.

This attitude towards time neatly avoids excessive complication, but does mean that the time-travel scenes of the book are essentially exotic backdrops before which the action can occur. They perform this role as handily as any foreign port or exclusive casino in a Bond film, and the descriptions of the localised disruptions that dog the time-travellers are engaging.

The plot is not especially complicated, but suits the book well—the pace of the story proceeds evenly and without dragging at any point. It’s interesting, though, that TimeSplash resembles a modern crime thriller not only in its strengths but also in its weaknesses. Some of the dialogue seems clunky, and although the characterisation of the main protagonist (Jay) is relatively even and unremarkable, the two most important supporting characters are rather two-dimensional.

Sandra, the female protagonist, is a woman out for vengeance whose fatal attraction to cruel men seems to be miraculously cured by Jay’s clean-cut niceness. There are very few female characters who appear as more than an adjunct to the men in this novel, and although Sandra’s part is more substantial it appears to be little more than a simple morality play—Sandra’s failings are sexual and her redemption tied to the love of a good man. In many ways the future of TimeSplash is a bit of a Parson’s Egg—the technology of the mid-twenty-first century, the sexual politics of the mid-twentieth. Although Sandra finally prevails, the middle of her story (in which she is effectively punished for consorting with Sniper, the story’s antagonist) seems more pointed than its conclusion. This progression is echoed in the misfortunes of the only other woman of note: Camilla, a handler put in place in Sniper’s organisation by his terrorist backers.

Sniper himself is potentially an interesting character—his motivation for making the devastating timesplash which Jay and Sandra must work together to foil is actually much more plausible than that of many fictional villains. Sadly, particularly towards the latter half of the book, he rarely appears in any scene without it being used to demonstrate that he is milled from a block of solid evil.

I read the e-book version of TimeSplash. At the time of writing this was the only way to get hold of the book, although it had just been picked up by Big Bad Media for publishing in both physical and audiobook formats, enhancing Storrs’s already thorough work at making the book available and supporting readers and potential readers. The TimeSplash website features links to reviews, vendors, and even fan fiction. For the technically-minded, Storrs helpfully provides a list explaining which formats you will receive if you buy the ebook from any particular vendor, including whether or not they are sold with DRM. Buying from Lyrical Press directly gets you access to 7 different DRM-free formats of ebook, hopefully catering nicely for all forms of hardware—I saw both the EPUB and PDF formats, and apart from a few niggles with the formatting of the EPUB, they were both made to a high standard. This is all extremely laudable, and something I hope other writers and publishing houses will emulate.

I had mixed feelings about TimeSplash: I liked it less than I wanted to, and in particular I would find it difficult to recommend it to my female SF-loving acquaintances. I found it thought-provoking only in a sense that I suspect Storrs did not intend (i.e. regarding the characterisation of women)—a shame, since Storrs’s short stories have tended to be deeper. As a straightforward terrorism thriller in which the time-travel elements are clever window-dressing, TimeSplash works well; it is a competent story and although the plot is nothing special it is a pleasant read.

Buy this book from Lyrical Press
Buy TimeSplash for Kindle from Amazon.com
Posted by Djibril at 16:06

This is a fun review, and it sounds like it might be a fun read (I can forgive shallow characterization in crime thrillers... ;-) ). I might look out for the print version of this some time.

Good observation re the female characters--that's exactly what good critical reviews are for--but I don't think it necessarily follows that women SF readers would enjoy it less. (Nor would it follow, of course, that the writer is a sexist, but that sexist stereotypes pervade the genre of fiction we're talking about.)

Johann, I assure you I am not in the least bit sexist. In fact, I've been an active campaigner for women's rights since the early 70s. I think the reviewer just misunderstood my intent for these characters (for which, of course, I take full responsibility.)

If you'd like to see my comments on this (otherwise excellent) review, they are here: http://bit.ly/cqgfdq (and if you register for the TimeSplash blog, while you're there, you will be among the very first to hear when the print version becomes available.)

That sounded really interesting, up until your comments on the gender politics & representation of female characters - getting bothered about that sort of thing really isn't just for female SF readers!

@S: that was kind of the point I was trying to make--saying that there are sexist elements to the book and then saying that women SF readers therefore wouldn't enjoy it was problematic to me. You've expressed why better than I did.

@graywave: I tried to say in my first comment that (assuming one agrees with the reviewer's assessment) problematic gender roles in the book isn't about you being sexist. I'm sure you're not. It's also not about your intent for the characters, it's about whether you've succeeded in making the female characters more than supporting roles for the male protagonist, complex rather than monolithic motivations, etc. This is a very common issue in thriller-writing and action films generally, and is more a problem with the culture of these genres than it is with sexism or bad intentions on the part of any given author. (Some discussion on this after the review I listed earlier: Thomson on Grimwood.)

Having said that, we all have a responsibility to do better with our representation of women, LGBT characters, people of colour, disabled, minorities and other marginalized groups than the flawed culture we are working in has done in the past. As I haven't read the book under discussion and I don't know the author, I tried to make the observation that I want to use this as an opportunity to improve the way I write. I see a review like this, look at my work and think, "Could I be guilty of the same thing?" (And the answer, of course, is yes...)

Johann, I didn't actually mention it - here, or on the TimeSplash blog - but another puzzling aspect of the review is that Keith picked Jay as the protagonist. While he is a significant character, I consider Sandra the main protagonist of the story - not a supporting role at all. If anything, Jay plays support to her lead most of the time. She is the prime mover of the plot, she drives the action (particularly in the second half), and she most definitely has more at stake than any other character (except mabe Sniper, the villain.) Compared to Sandra, Jay is a rather simple soul.

As I say elsewhere, this has been an educational review for me.

@S: Well, quite - after all, I was slightly bothered by it. But I do think it's fair to say that if you are in the gender in question there's something a bit more personal in this sort of thing.

@Johann: I agree, it would be too much to say that all (or even the majority of) women SF readers would be put off by the elements that bothered me. Indeed, it would be quite contrary to fact, since the reviews page for TimeSplash includes glowing reviews from at least four women. But my female SF-reading acquaintances I do know, and I think that they might also be bothered.

@Graham: Good work - campaigning for women's rights for 40 years is quite a track record!

@graywave: Also: as for your last point, I'm as interested about that as you are!

I certainly felt that Jay was the central character in TimeSplash, and this morning I ran through the book quickly to see what gave me that impression.

I would say that first four chapters are Sandra's, but Jay has more page time than Sandra in Chapters 5 through 20 (less Chapter 18) - that is to say, 60% of the book - and shares equal time with Sandra in the subsequent seven chapters. Furthermore, in chapters in which Jay and Sandra are together, the viewpoint seems to be Jay's (In particular, Sandra's emotional states are much more often described in terms of how they appear to him, whereas his are described as definite states).

Now, clearly the focal character does not have to have more page time than any other, but you can see how that, combined with the viewpoint being Jay's, might give that impression.

Of course, there are as many ways to read a book as there are readers, so it may just be an idiosyncrasy of mine. But I hope that explanation helps you to understand where I was coming from.