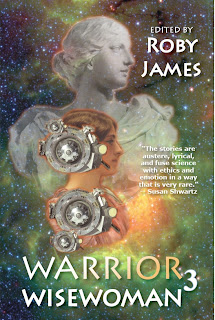 Warrior Wisewoman 3 is an ambitious and impressive anthology from Norilana Books’ science fiction division, a publisher responsible for speculative series’ including MZB’s Sword and Sorceress and Lace and Blade. The explicit theme of the Warrior Wisewoman series of books is that of science fiction with a strong female protagonist. The editor James is keen to point out in the introduction (12) that almost half of the stories in this volume are written by men, and she plays down the idea that such a collection might favour female authors. This is a fair point, but insistence on the fact that she doesn’t know the sex of an author until she’s decided she’s interested in a story is an uncomfortable reminder of the “colorblindness” fallacy in discussions of race; with a near 50/50 split in the ToC, however, I’m obviously not suggesting latent sexism in this case. And indeed the contents of this volume show a very wide range of approaches to questions of gender, from the unspoken inclusion of strong women to the explicit addressing of gender inequalities and prejudices; some of the best stories in this overall fine anthology sit at either end of this spectrum. The question is, does this focus on strong female protagonists result in a different kind of science fiction than a more mainstream anthology might?

Several of the stories in this collection take a “slice of life” approach to their subject matter: rather than a classic story structure with problems overcome or journeys undertaken, more than one of these stories have an anticlimactic shape with the protagonist enduring, surviving or demonstrating humility, and living to face another day. Perhaps this is a male reviewer criticizing “female” virtues, but I think there are also issues of genre in this question. The stories in this anthology are science fiction in the technical sense that they are set in a world recognizable as our own or in one of humanity’s possible futures, and the settings are explained in terms of science and rationality rather than supernatural or faith, but few if any of these are “hard science fiction” or stories whose climaxes involve the solution of technical problems; nor are there action stories whose conclusions require the physical defeat of a foe (although there are military SF stories, some of which are quite disturbing).

One complaint: the editor’s one-sentence summary/introductions at the top of each piece add nothing to the story that follows, and in some case are spoilery and irritating. I ended up deliberately avoiding reading them, and having to avert my eyes became a major irritant at the start of each new story. This is a personal preference, but I really wish editors wouldn’t feel the need to do this.

There are several excellent stories in this anthology, including the first several in the table of contents (good scheduling on the part of the editor there: most memorable pieces toward the beginning and end as well as spread evenly throughout the listing). The first story that really stood out for me was Aimee C. Amodio’s ‘Tourist Trap’, a beautifully written and unsettling story full of harsh truths, unflinching philosophy, and glimpses of beauty in the cruelest environments. The protagonist is Haryn, a tourist guide on a beautiful world where the rich come for decadent vacations, but the locals, the guides and other inhabitants of this alien planet, who have developed an intricate and expressive sign language because of the danger of exposing their hearing to the savage wild. The antagonist, the sentient alien ocean, perhaps the most terrifying, implacable, and just plain alien extraterrestrial intelligence since Lem’s Solaris. The story gives us the conflict between locals and tourists, demonstrates the beauty and foreignness of non-spoken language in a way that I have never appreciated before, and demonstrates the importance of respect for nature, even when that nature is in danger of killing you. A wonderful story that belongs in any collection of mind-expanding science fiction.

‘Mayfly’ by Gary Kloster is one of several stories in this anthology whose villains are trying to create a world without life-saving technology; in this case it is short-lived men angered by a vaguely described breakthrough that grants women eternal youth, but mysteriously doesn’t work for males. The science is very much second fiddle in this piece, but the protagonist, a 250 year old woman with the body of a teenage girl (who walks all over the men in the story, both intellectually and in quality of characterization) convincingly explores important issues of gender inequality, the value of life, the perniciousness of “non-prejudiced” conservatism. The victory in this story is won by violence (and more “magical” technology), but this is a story of ideas above action.

Another story that broke the mold, for me, and addressed important issues of gender and cultural respect was ‘Bearer of Burdens’ by Melissa Mead. In this lovely, understated piece the viewpoint character is male, an off-world genius artist brought to a closed, very constrained society to paint a very sensitive commission; but the heart of the story is his subject, Bearer Amberlynn, an enormously fat woman who takes on the griefs, joys and food offerings of her community. The painter’s task is to capture the Bearer’s beauty and show it to the world, while helping Amberlynn and her maidens gain a little freedom from the conservative Mandators who control everything in this world. A beautiful, delightful, infuriating and heartbreaking story.

The stand-out piece for me (and one of my candidates for top story of 2010 so far) was John Walters’s ‘Dark Mirrors’, a gritty military SF piece set in a brutal prison during a nightmarish interplanetary war that humanity is losing. Despite its setting, this story does not rely on violence for its climax. Rather, Walters demonstrates again and again (in both medium and message) the true meaning—and the true power—of pacifism, without excessive sententiousness or moralizing. In little details that you don’t see unless you’re looking for them, as well as in the big picture told only through infodump, we see violence begetting violence, we see that even winning a conflict through combat takes you further away from your desired ends. A gorgeous piece of writing; if this had been the only story worth reading (which it assuredly was not), ‘Dark Mirrors’ alone would have made this fine anthology worth reading.

A few of the pieces I am less able to praise so unreservedly, not because they are weak stories (I don’t think there are any of those in this volume), but because they left me unsettled or unhappy with the conclusion.

In ‘Natural Law’ by Alfred D. Byrd a diplomat causes a major diplomatic incident by secretly and illegally subverting the suffering that would be caused by the policies of a cult of “natural humans”. This could have made an interesting and dramatic conflict, but never explores the possibility that interfering with another culture’s mores is in fact wrong, and therefore remains one-sided and shallow moralizing. Therese Arkenberg’s ‘To the Altar’ is even more disturbing; a well-written story of an unending and increasingly jingoistic war, and the convincing process by which the peace-loving president of one nation comes to the decision to use a nuclear bomb to strike a crushing blow, kill countless innocent civilians but end the war. Alternative course are never explored, leaving the impression that this story does little more than justify atrocities like Nagasaki and Hiroshima (and of course the strategic killing of innocents by bad guys too) rather than tell a new story or explore moral complexity. ‘The Truth One Sees’ by Kathy Hurley is a story that uses science fictional conceits—hidden aliens, holograms and other hi-tech trappings—to bolster a psychic protagonist and some cheap stereotypes about closed-minded skeptics.

On the whole this anthology works extremely well, with a very diverse mix of story types and narrative adventures, stories that ask questions and challenge the reader’s expectations rather than merely providing escapism or flash-bang action and entertainment. Such variety and diversity makes it difficult to answer the question of whether this collection of female-focused science fiction has a different tone from the genre at large. Perhaps the focus on protagonists (heroines) who have ethical decisions to make rather than wars to win; who triumph through empathy or diplomacy rather than a strong arm or merciless spirit; whose adventure involve the desire for children rather than riches; whose concerns are at the human level rather than involving whole empires or planets. These are all stereotypes, and any one of them would be problematic and borderline offensive if stated as a generalization. As a break from science fiction commonplace, however, it makes for an anthology that this male reader finds refreshing and original, and of incredibly high quality.

Thank you so much for this review.

Do stories that deal with forebearance of unequal circumstances that women live in / with warrant the label of feminist literature? Shouldn't the goal of feminist writing be to challenge the sexist status quo?

@Regina dB: If I understand your question, then I think you may be right that a story that assumes unequal circumstances or "special virtues" of women, and thereby suggests that it's both natural and okay that women have to deal with challenges that men don't (or have to adopt different strategies to compensate for their disadvantage) could be seen as propagating the status quo and male privilege. (I don't know if any of the stories I discussed actually do this, although Bruce Golden's 'Dinner for one' and Jennifer Povey's 'The Race' may be a little in that vein.)

On the other hand, it is of course possible for a story to "deal with" these issues in a critical and subversive way, even without the character overcoming or challenging the problem, and clearly be a work of feminist literature. For example, Margaret Atwood's Handmaid's Tale shows an incredibly sexist (and only slightly exaggerated) culture, that is not overturned and only barley challenged, but is without doubt a powerful feminist work.

Therese Arkenberg (one of the authors) comments on this review at http://mumbling-sage.livejournal.com/52619.html.