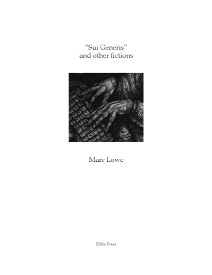 ‘Sui Generis’ and Other Fictions is a collection of twenty-three distinct short stories that, whilst using different themes and topics, each focus in one way or another on the notion of “uniqueness” as the title of the first story suggests. These stories were written between 2004 and 2006 whilst the author lived and taught in Hiroshima, Japan, some of them having since been published. Certainly, the author’s knowledge and experience of Japan are present in the stories, some of them being set in Japan, whilst others adopt a cleanliness of style and vividness that one might associate with Japanese aesthetics.

That is not to say that Lowe has mimicked or been overly influenced by Japanese culture in intellectual or aesthetic terms. The reader of this work is treated to a variety of themes that cover everything from slapstick humour, science fiction, through suspense (including the supernatural) to drama and philosophy. On a technical level, the stories are written according to a consistently clean and clear style, which adapts itself to the nature of the tale being told. In addition to this, Lowe ensures that the texts are detailed to the extent that the reader can immerse themselves in them, appreciate them and enjoy them for what they are.

Through some of the stories, Lowe applies an unusual method of relaying how time elapses. Readers who are familiar with the “Battlestar Galactica” reboot that finished airing last year will remember how different periods of the story were told out of the sequence in which they occurred, achieving a form of narrative effect that allows viewers to appreciate the story in different ways depending on what information they have been presented throughout the show: Lowe achieves something very different here, by weaving the non-linear nature of his tales as a narrative device more for the effect rather than a means of discovery—it is a bold manoeuvre for stories that last between three and five pages, compromising neither the narrative flow or the quality of the writing.

But Lowe doesn’t focus on temporal manipulation alone: he skilfully takes other factors and uses them to warp the narrative experience in a way that works to emphasise and invigorate the stories that are being told. Where appropriate, Lowe has turned convention on its head in terms if narrative flow, interjecting his own comments where one normally would not expect, let alone think that such “interference” work. In addition, this unusual approach is also clear from the way that characters behave, as well as how philosophical notions drive and perpetuate the story—I couldn’t help but feel that aside from attempting to create a truly unique experience between each story, and then form a collection of unique stories uniquely, there was a self-perpetuating element to many of the stories. Reading them was as though they each had their own flicker of individuality and life, something that I have not to date observed in reading a collection of short stories.

Lowe’s style is approachable, understandable and written at face value—what you read is what you get. Whilst some of the events and topics themselves deal with matters that are by no means new material, they are nevertheless compelling and particularly where there are psychological themes, told with a sensitivity that works brilliantly. In other tales, suspense is genuinely gripping, gore grim and thrillers are enticing. Lowe also uses reader participation effectively—he tells his stories based on what must be his own experience, but in such a clear way that it will resonate with other readers’ own experience to deliver a truly personal familiarity.

In terms of criticism, there are two areas that should be mentioned. The first is that a couple of the stories ended abruptly, in a way that left me feeling slightly robbed, much in the same way as when one has not finished all the delicious treats in a pack, and has them snatched away. In these cases, I couldn’t help but feel that more could be written for them, but I acknowledge that Lowe’s mission seems more avant garde, and others might feel that these abrupt conclusions work particularly well. The other is that I didn’t immediately understand a couple of the tales, prompting me to re-read them. That said, I did at least feel compelled to re-read them!

To end on a positive note, as this work deserves, ‘Sui Generis’ and Other Fictions will make readers think, and demand their full attention, which is exactly what this work should be granted.

Download this e-book from ISMs Press
Posted by Djibril at 18:45

I note that ISMs Press sister publication the fine Sein und Werden magazine, is once again open for submissions with a new theme: Pharmacopoea: see http://www.kissthewitch.co.uk/seinundwerden/next_issue.html

Thanks for mentioning Sein und Werden, Djibril. And thanks Nathan for the excellent review.
Rachel K