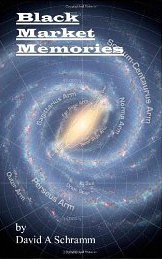 This is David Schramm’s first fiction book, self-published through CreateSpace.com. It’s solidly bound and set in a thoroughly readable typeface, with a rather decorative galactic navigation map on the front cover. As the website says, “Frustrated by other intergalactic adventures that rely upon fantasy science such as Faster Than Light and Warp drives, Worm Holes and Star Gates, Schramm shows us a future based on real physics and achievable engineering”, and he certainly has the credentials to do that. It’s largely a police procedural, using the tropes of thwarted kidnap, witness protection, and murder charges to examine his future world and peoples’ emotional relations within it.

There’s a lot to like about Schramm’s worldbuilding imagination, with Stellars (uploaded humans in zippy little space computers), virus-laden grenades, and digital drugs injected by laser gun. Simgames, virtual worlds addictive enough that they were outlawed decades ago, are a major plot point.

Sadly, Black Market Memories is very much let down by Schramm’s writing style, which is rather pedestrian, crammed with infodumps and sprinkled with acronyms like hundreds and thousands on a fairy cake. Each piece of new technology (the Stellar Unit, the surgical lasgun, the Electromagnetic Pulse, the Paired-Particle Digital Quantum Radio, the Emergency Position Indicating Radio Package…) is carefully introduced with its full name and a description, and thereafter referred to by its acronym each time. I don’t doubt there are readers who appreciate this approach to futuristic technology (indeed, I’m sure Schramm is one) but I’m very much not one myself.

The novel is set around the year 3600. Of course, given that Schramm adheres strictly to lightspeed limitations (while explicitly leaving out relativity) that’s not as many centuries of development as it sounds, and none of the social structures or pastimes we see are at all unrecognizable to us. (Several, like the Stellar repair shop/hospital, are described as deliberately mimicking the originals for comfort.) It’s refreshing in a way; we see so many SF novels taking it as a given that everything changes, and it’s good to be reminded that that’s a genre convention and not an article of futurology.

Crime bosses are establishing an illegal simgame (set in 18th-century Earth—I’d have loved to have seen scenes set inside it, a la Steel Beach or Halting State, but alas, it was not to be) and kidnapping or murdering Stellars so their stolen memories will bring the world to life. Ex-Navy SEAL and now Ranger (policeman) Arden Hughes is on the track of their hired serial killer, determined to protect his brilliant biochemist ex-lover Bobbi Rimfeldt. The plotting is not at all bad, if straightforward, but the characterization is flat, almost notional; it’s not so much lightly sketched as it is a third-generation photocopy. Arden has no motivation or interests besides protecting his ex-girlfriend and the rule of law, and Bobbi’s studies are driven by her strong mothering instinct. We see these almost entirely in narrative backstory, and the flat, almost unwavering emotional register of the text makes it extremely hard to learn more about them.

There’s the core of an interesting far-future police procedural here, and some creditable attempts at examining what it is to be human (and to be vulnerable) without the flesh, but they’re almost unrecognizable beneath the overgrowth of tin-eared acronyms and distracting prose, and they don’t make nearly as much use of the setting’s unique strangeness as it deserves. Minds without flesh, isolated by airless space and connected by communications networks, donning and changing semblances as easily as we change hairstyles; a dense, addictive virtual world powered by helpless slaves; a new, alien world evolving its own vibrant life. A more disciplined style, with much more of a focus on character and worldbuilding details rather than on technology (and more of a willingness to allow the reader to learn, rather than being told) would have brought out a great deal more from the setting.

Thank you for the review Sam. I wanted to write a book for nerds, which I am, and depict the life and science accurately instead of a fluffy book. Apparently I succeeded. Yes this world is full of acronyms. They are endemic to the language of engineering and science. And, Sam did get one of the main messages in the book about what true life beyond our solar system would be for us. Unfortunately, he denied it when he requested more character building, a difficult endeavor for sentient machines. If you are a nerd and do want to enter the real world of interstellar travel, please take a look on your own.

There's always a fine line, isn't there, between realism and readability. If I were to transcribe a real conversation between two people (for example on the commuter train to work), it wouldn't be as readable as a finely crafted piece of dialogue that I'd work on in a story. All that work is needed to make it (a) smooth enough to be readable, (b) not too repetitive or too random, (c) contain the right cues so that, even though I don't reproduce all the grammatical errors and shortcuts and dialect terms that real people use, we do get a feel for that "real conversation" tone that I'm aiming for.

I guess the point I'm making is that if you choose to follow the more "realist" end of that spectrum, you can't really complain if someone doesn't find it as readable as they'd like.

So having characters that are *meant to be* a bit one-dimensional and shallow and undeveloped, doesn't change the fact that you've written a story with characters that are one-dimensional and shallow and undeveloped. As writers we are artists, and part of our art (or artifice) is to suggest the realistic while presenting it in an entertaining and stylistic way. That's not easy, which is why art is not purely recording the world, but recreating it.