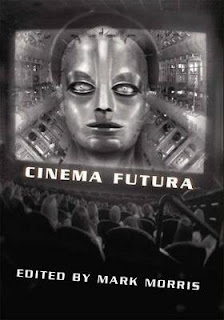 As a collection of essays, one of the best places to start in ascertaining whether the book has/will hit its mark is in the editor’s forward. It will, after all, be the editor’s guiding hand that will to a greater degree determine the book’s direction. As it turns out, this book emerges from a freely admitted—nay, a proudly stated—ambition to catalogue a genre that the editor, Mark Morris, has a long had an abiding fascination for. He begins with a very personal snippet about the effect of his first horror film on his eleven-year-old self. And recalls the experience with “fondness and nostalgia.” Having equated horror with science fiction in the arena of speculative fiction, this personal, visceral response is the vein in which he wants his book to run. Morris claims that after the publication of a collection of horror essays he edited, he intended for there to be a ‘sci-fi’ follow up, and he is proud of the result (my emphasis). This is a book that wants to present, not the grave, dry and deeply technical, but the personal and the affecting, from the viewpoint of the affected; moreover, an affected that can lucidly, amusingly, interestingly, describe and to some extent examine the effect they took on board. In describing the brief he gave to his contributors, Morris states that they had ‘carte blanche’ to choose their film, but it was one they had to “champion.” This is no book for the intellectually distant. This is a collection of responses that range from, yes, something of an academic flavour (mentioning in passing social, economic, political and ethical considerations), to the anecdotal, the flippant, the emotional. As Morris himself says, this is a highly subjective book. Perhaps therein lies the base of its charm; it lays the innate subjectivity of any review book, any book of ‘essays on’, wide out into the open. But instead of trying to hide this facet like a dirty little secret as so many ‘intellectual’ tracts attempt to do, it plays on it as a strength. By the writers’ enthusiasms, we are enthused; by their passion and apocryphal moments, we can be recharged, too.

To a science fiction ‘fan’, this affirms all that is great and good about their favourite genre, while under the protective label of ‘essays on.’ That is, a collective term that appears grandly institutional, and thus receives the nod of ‘respectable’ approval. The affirmation of ‘critique’; playfully hides the personal and approachable under the old title of the ‘literary’. And thus does science-fiction sneak the important into the realm of the improbable; the spoonful of sugar that makes medicine go down. The book’s format, at some odds with the content, masterfully continues the traditions of the genre it examines. To a ‘newbie’, perhaps this will go some way to explain why large portions of the public find the idea of spaceships, monsters, mutants, robots and fantastic adventures such a delightful draw. Indeed, these essays should involve more people than they alienate by their source material. It would take an utter anti-science fiction snob not to be piqued by the reminiscences within.

I joke with friends that “I used to be a Trekkie, but I got better.” I have been in the blindly adoring crowds of science fiction fans, but as time passed I found my tastes matured. From the additional perspective of some years’ training in literary arts, I find that nowadays I am rarely unable to look with a completely disinterested, innocent eye and just enjoy the pretty pictures, and, in fact, it is a mistake to consider the genre one of purely surface presentation. Science fiction has often been justified and justified itself as an open stage on which to debate wider political, moral and social concerns within a remit of the strange and fantastic—what Morris calls the ‘magical’ element of speculative fiction and technologies. Thus it provides as a setting that is flexible enough and wide enough to provide a counter-balance to what can be deep, probing and uncomfortable truths and questions. By and through the ‘excuse’ of the strange is the painfully familiar made more palatable, as touched on above.

For Morris, “science-fiction, fantasy and horror share a common perspective [...] they are genres which, by their very nature, should (and do) push against strictures and parameters and rules.” If this is true, if this is the biggest, most celebrate-able facet of science fiction, then the essays contained in the book, through the response the films evoked in their writers, should prove the ability of the genre to successfully break through and affect the viewer. By the level and quality of the reaction shall we gain some measure of truth of the ‘value’ of science fiction.

After all, this is what collections of essays seek to ‘prove’: that their subject matter is as important, different, exciting and thought-provoking as the writers have found it to be. Why else write or collate such collections? So I was expecting to be interested, provoked, amused and perhaps educated by this collection. I was also not expecting a dry and dusty re-read, re-critique of films viewed and reviewed professionally over any number of text books and commentaries. The warmth of the editor’s intentions, what he calls the “love” of his contributors for their subject, prepared me for something more intimate, more personal, and more readable for layman and expert alike. Words like ‘eclectic’ and ‘eccentric’ came to mind. With these expectations, I headed forward into the book.

It is helpfully laid out by year; starting with the earliest film chosen, a 1927 silent (Metropolis), and ending right up-to-date with a review of 2010’s Avatar. Few of the contributors’ names were familiar to me; indeed, Morris’s name was unknown to me before this book, but then again, unless one is heavily involved in the world of critiquing and commentary, the names of experts of any kidney are not going to be as familiar as, say, fictional authors who are celebrated on a much wider circuit. But a lot of the films were very well known to me, and I would be willing to bet, would be well known to the majority of readers, as a lot of ‘big titles’ in the genre, many of whom have crossed successfully into mainstream attention, are included. It is the familiar that is the book’s best hook. By setting the rule that choices must be films the writers can champion—a word that suggests affection, devotion and full commitment towards—this is a collection of established favourites; not just esoteric speciality films no one has heard of or gives a damn about. A genre is made a success by the popularity of its output; naturally, popular, well-watched and well-loved films are going to be the most common denominator between critic and layman. A book about the popular, with the added bonus of being written by people who, as the included credentials at the back of the book go to show, know their stuff, means that this is a book that is readable, but challenging, too. A book that does not talk down, nor up and over its subject material, alienating those who are looking for a book as fun as the genre it espouses.

The relatively short length of the essays means that it is a very ‘dip-able’ book. It’s also a friendly companion; the shortness of the essays making for a varied and gleeful mix and no one voice superseding and dominating. The experience came across like overhearing a room of literate enthusiasts during a coffee break at a convention, indulging in some light one-upmanship over the whys and hows of their ‘best film’ choice. And did the essays’ content meet the demands of the format and the expectations of the forward?

For me, they did. That isn’t to say that for someone who prefers fiction, or to make up their own mind about a film, this might not be their cup of tea, and I must admit that I rarely pick up books of essays. One of the joys of reviewing is that I am stretched beyond my own private tastes. But if I had found this in a shop and flicked through, I would be sorely tempted to invest. I cannot say whether the packaging would have drawn me. I find the whole-book experience to be an integral aspect of choosing something to buy and read. The sight, smell, feel, even the choice of font type and size are all important; and my review copy was an electronic one. But the content alone was promising, and went a long way to selling itself strongly to me. I hope this foregoing explanation goes to showing the quality of the content!

I cannot simply review every essay; there are sixty-plus and vary too much in tone. Instead, I started at the beginning, reading chronologically because the older films that I did not know so well fascinated me. These first essays were perhaps a little more ‘academic’ in tone than some of the later ones, as they discussed social and political contexts made clear and less purely theoretically propositional due to the events referred to being established historical fact. But then I started to jump about, and the essays started to delight me by tweaking my entertainment neurons. They presented a range of responses from the wide-eyed enthusiast of explosions to the seriously considered, interspaced with methodical descriptions, serious entries, and downright personal reminiscences wrapped around basic plot synopses, which help the uninitiated to that particular film.

What these essays all have in common is the deep rooting in the writers’ own lives. All the films are recalled at seminal moments; and this is something we can all relate to and what draws in the reader. It’s that point in time when a film slotted into life perfectly, stood out and made one really see it, love it and remember it. I found I was agreeing or disagreeing with the writers, much as one debates the merits of one celluloid outing over another with mates at the pub. Morris wanted this to be a book that showed the love. It certainly does. It was not dissimilar to talking about previously ‘guilty’ filmic pleasures in an open forum with the assertion that ‘it’s alright, you are among friends.’ It is the sort of book that will be much enjoyed by science fiction aficionados with a sense of humour, who don’t mind they are not being presented with chapter and verse on every minor detail and contextual theory regarding this, that and the other, but who appreciate the reminiscent nature of the pieces. It is also a useful ‘sound bite’ resource for quotations to begin, build up or bulk out a student of film’s own essays, but above all it remains highly personal, in content and in reader engagement. These are private reminiscences that are not about having unassailable opinions, but about sharing what made a moment in time special.

It is a knowing, shared experience between the writers and the reader: the reader needs have enjoyment and knowledge of the genre. This is not an ‘introduction to…’: this is a nod and a wink and a ‘do you remember when-?!’ It is not a text book for the seriously-minded, nor is it an easy entrance into the genre for the uninitiated; it is just a little too informal for that, but that was fine by me.

One to beam up.