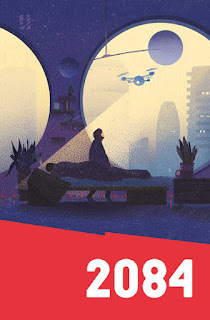 This is not an Orwell novel. This is not a premonition. A century on from the unforgettable 1984 becomes the title of George Sandison’s anthology auguring the future of our world. That future, foretold by writers before science fiction even existed, is a never-ending tale, changing its tools, characters and moods with regard to the epoch in which it was born. Proto-science fiction, science fiction, speculative fiction, anti-utopia and dystopia: the terms open up to the family of the fantastic telling the stories of the present time and its discontents. 2084 is no exception, but in this case it is no accident. In the introduction Sandison emphasizes how dissimilar the collection is in stark comparison with Orwell’s classic. In one sense, it is possible to recognize the truth in his words, as he elaborates on the how the world has changed since the completion of Animal Farm’s gloomy successor. Orwell’s post-war narratives were transfixed by the description of totalitarianism in the advent of the communist era. 2084 is supposed to relate to the family of Orwell’s novels arguably through what it is not, rather than what it is, becoming an adopted offspring of the timeless classic. Penned by fifteen writers, the stories in this anthology attempt to convey several different outcomes of (not so) futuristic realities that have pushed totalitarianism into a more subtle mode. 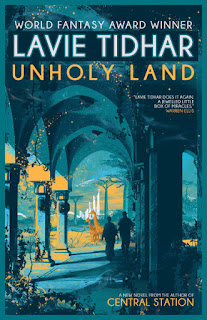 The narrative of Lavie Tidhar’s novel ducks and dives like a prizefighter, leaving his reader reeling. The protagonist, Tirosh, slips between worlds: the war torn lands of the Middle East, contemporary Berlin and other imagined worlds brought to shimmering life by Tidhar’s close observation. These are the ‘could-have-been’ worlds with elements of historical fact but steeped in mythology and fraught with darker perils and hints of monstrous beings and magical apparitions. 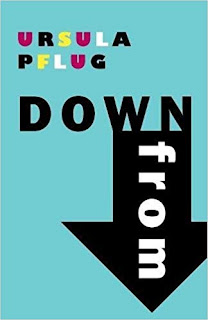 Down From is the shortish (a little over 20,000 words, I guess), dreamlike, fabulist fifth novel by Ursula Pflug, published by Snuggly Books, purveyors of bite-sized experimental and neo-decadent fiction. This is a classic unreliable narrator story, offering themes of uncertain memory, revelation, magic and reality, and featuring a viewpoint character who is uncertain about her own history, relationship with the thinly sketched secondary characters, and even which world she is in. The first half of the book unsettles with missing memories, shifting character names, stilted conversations—putting us firmly into the mindset of the discombobulated Sandrine. The second half changes both direction and pace, giving us a quite different story than we may have been expecting, albeit no less fabulist and semi-realist, and leaves as many new mysteries as we started with. After a slow start, this book rewards the faithful reader, especially if they love magic, uncertainty, fierce and unapologetic women, and stories within stories (and art within art).