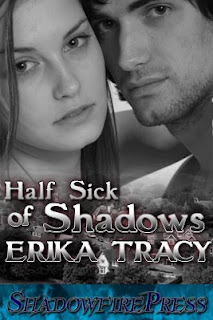 This novella is a tricky thing, and every time it looks as though it’s settled on a set of tropes then it turns a corner and becomes something else. The evacuee child arriving in a strange new place that isn’t the magical fairyland she expected, but instead a grim mining village... the child going to live with her mysterious magic relatives in their rambling gothic house... the talented teenager finding her place among other witches and among normal people... real fears and imagined ones, and learning to tell the difference...

There are a couple of strands running right through the tale, though; one of them is the idea of difference and prejudice. Witches and warlocks are feared and tolerated, the victims of bullying and casual prejudice; it’s easy to draw an analogy to Jews, given the World War II setting. The other is the relationships between men and women, made sharp and tense by tradition, poverty, and fear.

Magic is presented as a very feminine thing throughout the book. There are warlocks, we’re told, but we never see or hear from an adult warlock, and all the uses of magic we see are for very traditional womanly things—there’s even a spell for washing up, and another to cover the signs of domestic abuse. It’s explicitly contrasted to coal-mining, which is a masculine occupation; it’s the only thing the two men in this horribly dysfunctional family can bond over. As in all mining villages, the pit is the centre of life in Glynarien, and the rescue efforts when a shaft collapses are the only communal purpose we see. Of course, there’s a lot that our protagonist, doubly an outsider, doesn’t see; it’s as though once she’s made the decision to marry, her life outside the home is gone, and all we see is the isolation and depression of a foreign pit wife as her relationship with family withers and twists.

The PDF design is acceptable enough, with a readable font at a sensible point size, and the cover shows a predictable landscape-and-faces montage. It’s very clearly a modern British village street, not a 1940s one, but I can forgive a lot for a relationship novel with a man and a woman on the cover, both looking directly at the reader.

The world-building is good but sparse, with sketched details showing us the shape of a society; the Welsh names ring true-enough, if not perfect, and the social exclusions are all the more real for what we aren’t shown. This isn’t the Celtic-twilight, English-children-on-holiday Arthurian Wales of so many books; it’s the real working-class, churchgoing land.

Buy this e-book from Shadowfire Press
Posted by Djibril at 08:55 No comments: 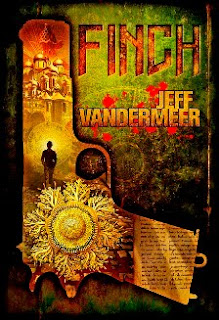 It’s an interesting confession, considering the novel’s rich noir influence and the character of Finch evidently based on that of Philip Marlowe. All the same, it soon becomes clear that the writer has mischievously wrong-footed the reader, and that the denial perfectly fits all the paradox and paranoia about to come. This is not downtown LA of the 1940’s but the City of Ambergris in some unspecified future, the same Fantasy milieu that informed Vandermeer’s previous outings City of Saints and Madmen and Shriek: An Afterword.

Finch, however, easily works as a stand-alone novel. Readers of those earlier books will revisit the same industrial, rust and emerald city, where mercantile houses Hoegbotton and Frankwrithe destroyed each other in their war for power. Readers of those earlier novels will find that much has changed. The gray caps, a race of subterranean humanoid fungi, have Risen and overwhelmed the city. Giant, spore-laden mushrooms have sprouted from the streets, looming to rival the tendril-choked spires. The walls and pavement are spongy and flesh-like, and Partials, those humans half-transformed into fungi themselves, keep an ever-watchful eye over the drug-suppressed and terrified population. There are internment camps reminiscent of the Third Reich. There are unexplained disappearances. There is ever present threat.

Against this vivid and sinister background, Jeff Vandermeer unfolds his mystery with the panache we have come to expect from him. There has been a murder at 239 Manzikert Avenue, Apartment 525. One corpse cut in half (à la The Black Dahlia). One corpse human. With no leads and a truly unsettling gray cap overseer breathing down his neck, lawman Finch finds himself plunged into a search for the truth where the truth quickly becomes stranger than fiction, or perhaps, considering the already fantastic environment, even stranger than that. The victims remain unidentified. One resembles a man thought 100 years dead. Surrounding these puzzles are the wider puzzles of the city itself. What is the purpose of the twin towers rising over the bay? What connection do the murders have to an attempted genocide 600 years ago? Who is the Lady in Blue, the enigmatic leader of the rebel underground? Vandermeer draws us into a tangled web of intrigue and suspense, and the ride is never less than thrilling.

As a concept, Finch is breathtaking. The book’s flavour is a collision of weird and urban influences. Most notably, the Chandleresque noir, always at the forefront with the crisp style, the inner gritty musings and deftly controlled set pieces. Draped over this are allusions to Lovecraft and Burroughs, peppered with a modernistic dash of Philip K.Dick, Richard Matheson and James Ellroy. It’s a heady brew and one gets the feeling that in less capable hands, this tale may never have become more than just interesting homage. But Vandermeer pulls off a rare trick. Not only does Finch deliver one of the best noir thrillers of modern times, it also manages to transcend influence and becomes something remarkably other. Vandermeer has not just genuflected to Great American Writers, with Finch he has squared up against them and potentially joined their ranks. The characters are real—they live, love, despair and mutate—and cannot fail to move or repulse you. The plot is tight and convincing. The pages fly by. The atmosphere is genuinely disturbing. Finch provided many a shudder to this reader, more than I can recall from other works in recent years. Parts are deliciously gross. Through it all is a compellingly human and melancholy streak, which lifts this novel into literary realms.

It is doubtful you’ll have read a book like this before. There have been comparisons to China Miéville’s The City and the City, an equally stunning novel, but here gritty emotion in relation to the alien replaces the politics of Mieville’s work. Newcomers to the New Weird may find themselves on uncertain ground. Those unfamiliar with steampunk noir might feel a need to adjust their sets. I did wonder how a reader unaccustomed to Vandermeer’s milieu might engage with the novel, at least initially. The back-story is a little on the sparse side and Vandermeer does not coddle his readers, a style that undeniably suits the book, but one that may not prove so alluring to the novice. That would be a crying shame because Finch deserves a much wider audience than slipstream genres can generally provide. Nevertheless, the warp and weft (and there is a lot of warp here) of Vandermeer’s world will soon grow on anyone—much like fungi—and fans of weird fic and those hungry for something different will more than quench their thirst here.

In the final analysis, Finch isn’t about genre. Vandermeer’s genius lies in showing us the power and potential of speculative fiction, mapping a road into the twenty first century. With Finch, the author reinforces his reputation as a pioneer and if it has to be about genre, then this novel more than proves that the New Weird—or whatever you want to call it—is very much alive and kicking, perhaps even in its infancy.

On the strength of Finch, one certainly hopes so.