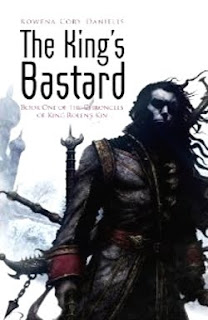 The King's Bastard is most definitely a book that wears its subgenres proudly. The title, cover, map, and blurb all let us know we're in for kings-and-princes stories in a recently founded fantasy kingdom, with inventively spelt mythological monsters (foenix, unistag—which, sadly, has a traditional unicorn horn rather than a single stag's horn like a tree—and leogryf, for instance), fractious barons, and a neighbouring country with which it may or may not go to war. On the other hand, it is an interesting subversion of the traditional high-fantasy tropes; neither kingdom qualifies unambiguously as good guys or bad guys, which is a pleasant relief. The cover radiates “dark fantasy”, with a brooding, wild-haired gentleman carrying either four dangerous-looking weapons or a set of extremely gothic bagpipes. (The dim mood lighting makes it rather difficult to tell which.)

The presence of all those monsters is quite neatly explained within the text, and tied in neatly to the kingdom's social structure, but Cory Daniells has (thankfully) resisted the temptation to explain away everything here. There are two more books to come, but we knew that from the front cover, so it's no surprise that this one ends with the beginning of a new plotline; the old reaches some resolution, though, and the next two books are due out in the next two months in any case.

There is one element that is both new and praiseworthy here, and that is the treatment of bisexuality. Male-male love is both socially and politically taboo in the kingdom, so a young man's impulsive confession (and the characters here are realistic young people, with all the plot-driving impulsiveness and passion that implies, without the annoying childishness it can often default to) lands our protagonists in rather a lot of plot, and affects their relationships with each other in subtly sketched ways rather than taking the obvious paths of condemnation or immediate acceptance.

If there is one thing I dislike about The King's Bastard, it is the unsubtlety of our major villain; I have seen this same conspiracy before, and if I'm marking time waiting for the protagonists to catch up with me as a reader then I expect a payoff at the end, with a new and unexpected twist on the plan when it's done. I did not get that here, which was disappointing. The quality of the prose is unremarkable; there is rather more internal monologuing and infodumping than I like, but it is still engaging, and the only reason that it didn't keep me up all night was that I had finished it by bedtime. 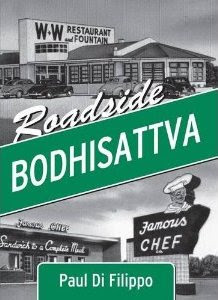 Roadside Bodhisattva is a good example of the way a teen central character and narrator does not necessarily mean its readership will be limited to young adults. There is none of the literary revolution suggested by the author’s dedication to Henry Miller and Charles Bukowski or the central character’s continual references to Jack Kerouac. The only similarity is in that this is a first person story about being on the road (well mostly beside it). It is told by a sixteen year old about life at a roadside diner and motel. It is one of those “spiritual apprenticeship” stories, but without the magic of Harry Potter, Twilight, The Teachings of Don Juan or The Peaceful Warrior, though possibly with more quiet wisdom. The author is suggesting that Buddha is found in everyday life through ordinary relationships between ordinary people—as contrasted with the young central character’s desire for something extraordinary.

Kid A is a sixteen year old runaway anonymously seeking a life of adventure on the road guided by, even better living through, Jack Kerouac’s The Dharma Bums and The Prophet by Khalil Gibran. He meets Sid, a man whose long experience on the road, knowledge and generous attitudes reflect a practical understanding of the real Buddhism the boy is looking for. He contrasts with his parents’ Buddhism which sees them with “their heads so far into some kind of jackass mysticism that they tended to let a lot of ‘unimportant’ things like grocery shopping and mortgage payments and laundry slide.” Kerouac had proved for him there were other types of Buddhists.

Sid on the other hand lives by simple rules like, “I start out friendly, and see how the other guy responds. After that, based on what he does, I follow tit for tat.” His attitude to the boy’s guides is clear cut but mixed: “Your Kerouac is a shot of super-antibiotic to cure you of mental clap. But the other one is like a stolen blank prescription pad. You can write yourself all the prescriptions you want from it, but there’s no authority behind ‘em, and you’ll never get ‘em filled.” Kid A quotes directly from Gibran from memory whilst he associates himself and Sid with the main characters and events in Dharma Bums.

The two stop at a roadside diner and motel for breakfast when Sid talks the owner Ann into giving them both jobs. We meet a group of ordinary people in ordinary pain. Sue, a girl about seventeen, about a year older then Kid A, who’s been in trouble and sent to live with her aunt by parents who don’t know how to handle her; Sonny the stuttering cook; Angelo the grumpy mechanic; and Yasmine the sexy but bitchy waitress. Through the story we find out each of their stories as Sid intervenes to change their lives for the better, apparently out of generosity. Meanwhile our main character stumbles along, accidentally helping out each person while he tries to get it on with Sue. Kid A finally becomes impatient to get on the road and continue his search for the adventures that will let him live his Kerouac fantasy life, leading to a somewhat surprising climax.

Roadside Bodhisattva has a simple direct narrative style of storytelling; it is an easy read, probably comfortable for a sixteen year-old readership, as suggested by the narrative voice. But we don’t really see even the darkness that plagues Harry Potter, which has driven the Kid to run away and to base his life on a literary fantasy. It doesn’t even stretch the reader’s vocabulary as much as the Potter books. It is a pseudo-Buddhist fable set in small-town America. It is a little slow in places and the plot is convenient in others, but as you’d expect from a fable it points to depth whilst focussing on daily life, apparent simplicity and surface appearances.