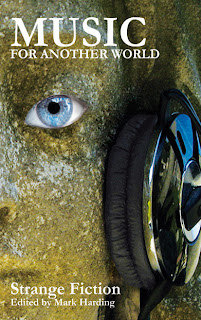 In the introduction to Music for Another World, Mark Harding describes his selection process as unrelated to any consideration of form, genre, plot, or music. Instead, Harding’s choices were dictated by the stories themselves: they were ‘...stories that made me want to harangue innocent commuters at bus stops with précis of the plot, or tie people to chairs to read excerpts aloud at them...’ Of course, the thread that links each of the 19 stories together is music and its transformative, mysterious, and somewhat nebulous power over sentient beings (human or otherwise).

The stories themselves are wide-ranging, being set in any time from the recent past to modern day and well into the far-flung future. Characters vary in gender, ethnicity, and species - from a many-gilled alien warrior with a voice like a siren (in ‘Festspeel’ by Vincent Lauzon), to a sentient ship who likes to be sung to (in ‘Lorna’ by Tom Brennan), to a not-so-tortured musician with the desire to become immortalized in his first (and last) album (in ‘The Legend of Left-Hand Lewis’ by Maxwell Peterson). As varied as the characters in the stories are the backgrounds of the authors who wrote them; Harding notes that submissions came from Guildford to XiaMen, and many places in between. It is possibly a testament to the interesting mixture of authors that the themes explored in the collection themselves are diverse: loss, obsession, desire, solitude and redemption, among others.

I enjoyed reading this collection immensely, but I did have some difficulties with the pacing. Though the book was sectioned into ‘acts’, there were many times when I felt plucked out of one world and thrown into another. However, whilst this anthology is perhaps not the best example of how well thematically-driven collections of stories can work together to create an overarching narrative structure, it is certainly a testament to the discerning taste of the editor; I found myself agreeing wholly with Harding’s desire to discuss and share many of the tales in this book with anyone who was willing to listen. A few of the stories weren’t new in plot or structure, but were imaginative re-workings of familiar themes, whilst in others I found wholly new ways of seeing music that I had never previously considered. For example, the characters in ‘Arrhythmia’ by Neil Williamson live in a world dominated by rhythm; they work and interact to a collective tempo. However the narrator, Steve, feels nothing but dread about the endless cycle of work, eat, play, sleep. The root of the story lies in Steve’s perceived isolation—his misery is magnified because he believes no one feels the way he does. However when he hears a beat that drowns out society’s intonations and finds someone to share it with, the experience isn’t what he was expecting.

While many of the stories in this collection left me wanting more, there was one in particular which seemed to create a whole world through suggestion, and left me with the fervent hope that it will be expanded into a full length novel at some point. ‘Star in a Glass’ by Vaughan Stanger is the story of the re-forming of a ‘prog-metal-ballet’ band in the near future. The story itself is in some ways an interesting character study, being centred on the egos of once-great musicians hoping to re-live their glory days. However, the details Stanger intersperses within the tantrums and trials of the band create a richly textured (if somewhat gritty) world; one which I would personally love to visit again.

Not being musical myself I picked up this book with not a little apprehension, wondering if I might be put off by technical jargon or musical snobbery, but instead I found in its pages new ways to hear, see, and experience music, and a new appreciation for why it is such a powerful art form. Some of the characters in the collection also seemed to experience music differently at the end of their stories, leading me to believe that the editor may have either consciously or subconsciously chosen works with an emphasis on how music can affect and change the nature of life, reality, and society.

Music for Another World is the first offering from Mutation Press, the brainchild of the editor of the book, Mark Harding; and if this anthology is anything to go by, I’m sure Mutation Press will be “increasing bibliodiversity” for quite some time.