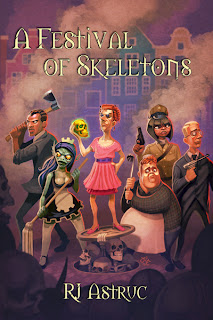 Fantasy and science fiction have long had a tradition of being flexible staging arenas for social and political debates and diatribes; a ‘see here, this is important, so get your eyeballs around this!’ earnestness. Refreshingly, while some more thoughtful aspects do appear in Astruc’s A Festival of Skeletons, this is principally an off-centre novel with elements of surprise and subtlety. The packaging of this novel leads one to expect a frothy, comedic fantasy novel, peopled by grotesques and stereotypes.

Not much is obvious about this tale. For a start, a brightly-coloured volume arrived with a cover depicting main characters in garish costume and with a queer intimacy the reader is plunged straight into character action. The author’s style does not lean towards detailed description, and this is perhaps the best and most subtle technique at her employ. We come upon characters and geographical and social minutiae piece meal; bit by bit we learn motivations and history, as if we are genuinely there, learning from scratch. Though the writing style is omniscient narrator (we can be anywhere, in anyone’s mindset from one chapter to another), it is a narrator that is omniscient only in terms of where it allows us ears to see and eyes to hear. We have to be patient. Thus we may start being baffled and more than a little annoyed by the transvestite mortician, his whims and mercurial moods. But by the end of the book he is nothing less than a much-maligned hero, with good reasons for all he does.

In a world constructed of three major landmasses arranged in a ring around a central sea, the action takes place in the city of Kamphor; principal city of the land of Gavistan. Kamphor lies at the edge of the large central sea, which is also the home of a race of ‘merkind’: a non-gender specific designation of a race of mermen and women. The merkind in Kamphor live on a floating slum in the harbour made of left over wood and building materials; a second-class citizenry faced with some xenophobic attitudes by the majority human inhabitants. These merkind are not a cuddly misunderstood race; they take years to mature from formless, limbless sac-like young and once mature and humanoid in shape, are cantankerous, cannibalistic and prone to firing poisoned barbs from any number of hidden orifices.

The human inhabitants live in an environment that adheres to some staples of the fantasy genre: a High-Renaissance-style mode of living including horse-drawn vehicles, an aristocratically structured social hierarchy, gold and silver coinage, gothic architecture, free-flowing magic, magicians and obligatory flowing robes, but also incorporates a number of incongruous modern-isms (high heels, trashy underwear in man-made fabrics, guns, plastic nick-knacks and a Nineteenth Century repertoire of embalming and mortuary techniques). The result is a hotchpotch setting that is recognisably ‘fantastic’, yet also very immediate and empathic to a modern reader.

We are introduced the main character and mortician, Ebenezer Sink, in the very first paragraph. Sink is a middle-aged, acerbic cross-dresser who can accurately predict people’s deaths after physical contact. He has some dubious history and contacts at the Royal court, and lives opposite noisy students whose drunken debates on a social revolution prefigure the rationale behind the baddies’ own plans later on. The murders; a series of violent deaths among prostitutes in the city’s East End, are no doubt a nod to Jack the Ripper, and are what drawn Sink into the case. What us not made clear until later is why Sink feels himself obliged to be the investigating expert on the deaths, nor what his credentials are to do so, although a second magical talent is alluded to, if not fully described, early on. His assistants at the West End morgue; Joshua; a very ordinary young man following a 15 Step process and a merkind with a chip on both shoulders called Vona, who seems lumbered with all the household chores, both have their parts to play in the ongoing investigation. This latter is hindered as much as possible by an angry young policewoman and Sink’s rival at the East End morgue, his ex-apprentice, Torvault. There is also an unlikely Don Juan in the form of a small, fat kitchen hand and a couple of extra loops in the tale. Then the dead start to rise and the city is under siege. This unlikely band of heroes and enemies must work together if they are to save the city, and, indeed, the world. Finding out why and by whom the prostitutes are being killed is only the beginning, for while the murders may forward the baddies’ ambitions, a darker, more desperate villain lurks in the shadows; a necromancer with nothing to lose...

Although both xenophobia and sexism are raised in the course of the character development of both Vona and the policewoman, Arifia, neither play terribly strong parts in the overall story arc. Yes, the merkind are second-class citizens, mistrusted and generally left to their own devices. And yes, women have a harder time trying to find equality in the social scheme, but these are not major factors in a plot where the main character is a cross-dresser with sufficient personal angst to sink a battleship. It could be said that Sink’s traumatic emotional past (he lost the love of his life years ago and has never looked at another since) and his adherence to women’s clothing endorse him as a strong ‘feminised’ character. This is of course a load of old tripe. Sink’s failings: his undoubted love of material gain, his closed emotional book, his sarcasm and dry wit, as well as his pig-headed secrecy about himself and his motives, make him both unsympathetic and decidedly ‘male’ in any theorist’s handbook. The fact remains, his is a difficult and uncomfortable primary character for readers to get to grips with; more anti-hero than pure hero.

Vona’s and Arifia’s continued resentment make them thoroughly unsympathetic, even rather two-dimensional characters; not exactly poster-children for their respective causes. It is not until during the climax of events that they mellow sufficiently to enable approachability, depth and much-needed wisdom to surface, hinting of more to come for their characters’ social dynamics. This could be Astruc’s point: that the dogmatic individual is a ridiculous figure and that only through engagement with the wider world, and maturation into a broader view, will they be able to develop.

The male characters, being more fallible, unlikely and potentially tragic make for more interesting reading, and are the main plot drivers. Considering that their secret traits include sexual predator, serial killer and cataclysmic, obsessive nervous wreck, they are not what a ‘moral’ tale should espouse as its heroes. And the thwarting of evil should be a moral tale, right?

Well, perhaps this is the novels’ truth: no one is perfect, and heroes are more often than not unlikely. This is not just a moral tale, though; it unpeels layer after layer of geographical, social and character detail like a magical onion of narrative possibility, revealing plot layer after plot layer, and finally stands revealed as a raw, painful core of love and loss, and the lengths people will go to, to seek peace from emotional wounds and scarring. As unbalanced and un-heroic as he appears, it is Sink who is the sanest one of all. For he has come to terms with his loss, and must be the one who has the hardest job of all; ensuring that loose ends are tied up, that social justice is served applicably and not blindly, who actually bears the burden of others’ actions. I came away from all this with the impression that this is a book about accepting one’s faults and bearing responsibility for them; a book about maturation.

It is a highly personal novel that blasts out of the water other novels that seek merely to be a stamping ground for authorial hobby horses. According to the author’s bio, the novel was first drafted during a ‘self destructive bender,’ and, indeed, the uncomfortable frankness of it makes this a less than cordial read. But it is a fascinating one. Astruc has packed more into her tight structure of just 15 chapters (reflecting the 15-steps process of the novel’s self-help group) than more indulgent fantasists do in longer books. This is primarily achieved by the style of writing. We are not privy to every last bit of information before we meet a character and we are as much in the dark as they over events until they have faced them. Clarification and explication come piece by piece, scattered over the chapters, so it is not until the final dénouement that we have all the pieces to the picture. Moreover, there is some suggestion that this is an author playing with the reader; this is a hall of mirrors that reflects onto the reader the emotional impact of the character’s experiences because they are elements that we can relate to: we are caught by the recognition. We become as involved as the characters; and we have much invested in reaching the end.

As mentioned above, I was expecting A Festival of Skeletons to be a frivolous comic fantasy novel. I was ambushed instead by a very believable realism and a deep tale of loss, revenge and very unlikely heroes. That said, the ascorbic, dry style will not be to every reader’s taste, and it would not surprise me if Astruc alienates as many readers as she draws into her fold. But for those who stick with it, this is a challenging and fascinating take on the fantasy genre. I for one sincerely hope that she revisits Kamphor, or moves further afield to one of the other countries within her world.