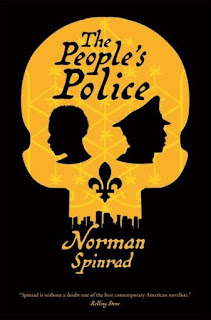 The very best satires have enough truth at the core of their fiction to make them uncomfortable reading, and so is the case with Norman Spinrad’s The People’s Police. Spinrad is perhaps best known for his self-proclaimed anarchic ideals in his fiction, which fully come into play here: the central question asked is “Suppose the people and the police, who are so often on opposing sides in the US, actually came together for the benefit of all?” In this world, the order of government authority (and business world corruption) is at odds with everyday people and with the chaotic loa spirits, with the soul of New Orleans itself at stake: does the city belong to its everyday inhabitants or to the distant politicians and visiting tourists?

The novel takes place in a post-Katrina and post-2008 housing bubble-burst New Orleans, where the most pressing problem the police have is the unending numbers of eviction notices to be served, even among themselves. There are three main characters for the bulk of the action: Martin Luther “Luke” Martin, a former gang member who sees the police force as the biggest and best-armed gang of all; J.B. Lafitte, bar and brothel owner; and MaryLou Boudreau or Mama Legba, first mockingly and then accurately called “White Girl Who Dances With Loas” and “Voodoo Queen.” A fourth character, Colonel Terrence Hathaway, appears in the final act as a Christian and Army officer who sees a chance to do good in the world, and actually takes it. Along the way, a reality tv star is elected to political office, hurricane damage is mitigated by magic, and cooperative anarchism is a more reliable tool for governance than anyone would have expected. Things take a darker turn in the final pages of the book, which I don’t want to spoil too badly, but suffice to say that it’s an attempt to bring a little more realism into the story regarding localized American politics, especially in Louisiana, and that it works even if the romping tone that had proceeded it was more fun for the reader.

The insertion of the loas, mystical Voodoo spirits who can possess and speak through human bodies if they choose to do so, into the story introduces a fantastical element into the satire that does unsettle it a bit. Loas and Voodoo are a part of life in New Orleans and parts of the Deep South. Erzuli is the Haitian spirit of love, dancing, and luxury; she appears in the book as one of the entities that periodically possess Mama Legba. Mama Legba is a white woman, the child of hippies who live and perform in New Orleans: she’s the epitome of outsider and yet in the book she is never considered as such. When she is possessed by the loas, the African-American practitioners are surprised, but then disappear from the story in a way that made me uncomfortable as a reader: it does not make sense to bring up the fraught topic of race in America, in the South, and then immediately drop it. Indeed, engaging with it head-on would have been a service to the story, as would have been some additional scenes with Voodoo culture generally. It is clear that Spinrad did his research impeccably, and it would have been nice to see more of that, especially in contrast to the Christian character.

The People’s Police is a fast-paced, funny novel; almost a magical-realism counterpart to A Confederacy of Dunces. Nonetheless, there is a disconnect between its author and its content that troubles me: Spinrad is a white American writer currently residing in Paris, it is disconcerting therefore to read about black characters in New Orleans, whether as cops, pimps, or gangbangers (a term that is used in the text). While the writing itself is incredibly enjoyable and thought-provoking, it nonetheless performs acts of ventriloquism with a white man’s words coming out of black men’s mouths, ventriloquism I find troubling given our current discussions around both diversity in publishing and cultural appropriation. Coming from a mainstream genre publisher with a wide reach, in hardback no less, would it not have been better to instead publish a story of New Orleans by an actual resident of New Orleans, to signalboost new black writers rather than old white ones? (Lest anyone write and say “but there aren’t any!” let me point again to Kiini Ibura Salaam’s When the World Wounds (2016), which I reviewed here in February.) Further, the public is genuinely hungry for diverse texts by diverse authors, as witnessed by the furors that have erupted around the whitewashing aspects of Marvel’s Doctor Strange and Iron Fist. In 2017, we do not need or want cultural appropriation; as part of a global society, if we want kung fu dramas, we can legally download and watch the latest shows from China mere hours after their home release, and if we want to read about African-American stories and concerns, we can read books in their own words; last year, Ta-Nehisi Coates became a writer for Marvel’s Black Panther series and it was one of their most popular titles of last year. The old adage that works by diverse authors “won’t sell” is thus manifestly false. Readers can make up their own minds about how they feel about this aspect of reading and watching, but it is a topic that should at least be considered when deciding whether or not to pick up a new book.
Posted by Djibril at 16:00