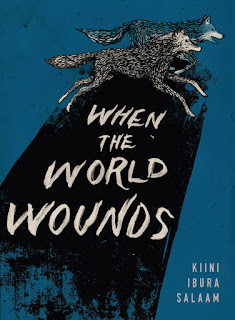 Kiini Ibura Salaam is an American writer of speculative fiction that directly engages with women and race in ways that are both thoughtful and disturbing. This is her second collection of short fiction; the first, Ancient, Ancient (2012) won the James Tiptree Jr. Award for that year. Salaam is a writer of short pieces that have largely previously appeared in collections; When the World Wounds consists of three short stories, two novelettes and a novella, only one of which is reprinted (and has been edited from the previous version). As such this collection will be of emphatic interest to her fans, and provide much food for thought for new readers.

‘The Pull of the Wing’ takes place in the same universe as several of the stories from Ancient, Ancient. The protagonists are all alien, and convincingly so as Salaam deftly describes both their bodies (winged, with lenses and feelers) and the very different perceptions those bodies process; it reminded me of Martha Wells’s Raksura race from that eponymous series, exactly different and exactly similar enough to humans to be exotic but comprehensible. Unfortunately, having not read Salaam’s other book, I’m not sure how well this story illuminates the worldbuilding she has done before; the story itself concerns a group of friends who try to understand more about their world and, having reached a new comprehension of their lives and their species, seemingly wish that they hadn’t. It’s an odd story, and I’m still not sure how I feel about it.

‘The Taming’ is the story that stuck with me the longest; it’s about the domestication of wolves, from the point of view of a wolf. Like the rest of her writing, it is incredibly sensual and incredibly disturbing. Unlike the rest of the stories in the collection, it is accompanied by a small illustration of a wolf’s head in between each segment, unique to this version (the earlier version of this story in Interfictions is slightly different textually, and does not have the illustration). As a reader, part of me kept wondering if the wolf was indeed actually a wolf for reasons I can’t actually articulate— perhaps something in the specificity of the writing, perhaps only that I was reading in a time of incredible anxiety in the real world. Spoiler alert, the wolf is a wolf, but that does not make its encounter with domestication/civilization any less violent, nor its fate less worrisome. After all, it is the twenty-first century; we are sadly all too aware of what happens to wolves and the wild.

‘Hemmie’s Calenture’ straddles the space between magical realism and a more straightforwardly supernatural tale, told in titled vignettes that start as a fever dream and become something else. Hemmie is a slave in early nineteenth century Louisiana who is injured while trying to escape to freedom. An unnamed woman, who can sometimes speak to her directly through her mind, helps to heal her, and shows her another battle that is being fought in the forest and swamps alongside the more conventional battle between the British, French, and Americans. The woman charges Hemmie with gathering an army, and so she journeys to New Orleans to find (real historical figure) Joseph Savary and his battalion of Free Men of Color… who are not interested in her fight, and indeed, think her mad. At the end she finds a single soldier willing to accompany her, and the woman assures her that she does have an army after all. This is a resistance fable, and if it is rather different than the other stories, it is all the stronger for that: Freedom and change start in the spirit before they become true action.

‘Volcano Woman’ is a short story that is about the power of a woman’s anger. When the protagonist is threatened by escalating street abuse—the kind that shifts from words to physical pursuit in an eyeblink—she escapes and finds a strange old woman who feeds her a comforting bowl of soup and applies a series of unguents that remake her into something else. When she faces her attacker again, she is the active cleansing fire of rage. The story’s prose is spare, but the message of the importance of purposeful anger is one that speaks to a multitude of political movements in the United States right now, but especially that of black women.

‘Because of the Bone Man’ is the final piece in this collection, a novella that takes on the 2005 Katrina flood of New Orleans along with the physical and emotional devastation that catastrophe wrought. The story takes place six months after the flood, just before Mardi Gras. Like ‘Hemmie’s Calenture,’ the story mixes the magical with the supernatural; it’s unclear if the Bone Man is a human or not, a personification of the celebratory ghoulish costumes of some of the parades, or not—nor does it matter. Either way, he makes paper mȃché masks culled from the storm’s debris, waterlogged photographs, and gives them to the ghosts of children killed in the storm. Salaam’s anger at the disaster’s aftermath—she is from New Orleans—bluntly confronts the harsh reality within the story; there are white dancers at the parades who are “thrilled to take the space black bodies usually occupied” (164) and the ghost of a Baby Doll dancer states that “Yeah, it was just a coincidence the levees broke where they did. It’s just a coincidence people like us is homeless and them with dry houses don’t look nothing like us” (174). Like several of the other stories, it concludes with hope, as the Bone Man finds a nun and together they make a miracle, using the masks to restore what children they can to life. This story speaks not just to psychological and emotional healing from trauma and adversity, but to the preservation of culture—and few things are as central to New Orleans culture as the Mardi Gras krewe culture.

When the World Wounds is not an easy book to read, but it is one that is well worth the time spent both for the stories told and for the absorbing, poetic prose of Salaam. While the stories in this collection share certain themes and modes of writing, they are all singular experiences that can’t be repeated, something that can’t be said for several single-author collections. Most especially, despite the darkness of much of the stories’ content, there is the prospect of hope and healing to be found—traits that many readers will need right now.
Posted by Djibril at 15:05