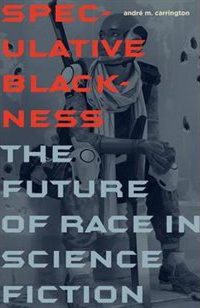 Professor carrington’s focus in Speculative Blackness is on the interactions among not only science fiction, but other speculative fiction categories such as “fantasy, horror, utopia and dystopia, paranormal romance, counterfactual history, magical realism, and so on” (23). The thrust of his book is that the “Whiteness of Science Fiction” or the identification of speculative fiction as a White cultural tradition marks “alienation as a signal feature of Black experiences with the genre” (17-18). To support and illustrate these generalizations, the author presents an array of studies of presence and absence of African Americans in fandom, as demonstrated in fanzines, television’s original Star Trek series, comics, Deep Space Nine and its novelizations, and in a final chapter, he moves into online fanfiction archives involving “Black British-diasporic characters in Harry Potter,” extending his reach beyond the African-American sphere. He does a great deal of investigative work that reveals little-known aspects of the history of fandoms, of fans’ influence on the Speculative Fictional products (books, television shows, films, comics, etc.) that evolve in relation to the fans’ responses to them. As such, this is a reception study, except in the sense that the reception in turn becomes an influence on the subsequent development of the fiction.

Some of the material covered would be unavailable to the casual reader because of the exclusive nature of its source: the history of an early Science Fiction fan organization in New York, the Scienceers, shows that James Fitzgerald, an African American, founded the group, and led it for several months in 1929 and 1930, before leaving it to work on a project leading ultimately to the development of rockets for a space program (30), but afterwards, in another fan organization, a White fan, Terry Carr, wrote in San Francisco Bay area fanzines under the pseudonym of Carl Brandon, who was “revealed” to be Black. In other words, Carr “integrated” the fandom of science fiction with a nonexistent person of color. The evolution of fans’ attitudes towards race in general and Carl Brandon in particular is traced by carrington through a number of rare, because mimeographed or even hektographed, fanzines. Their relationship to van Vogt’s Slan (a stitch-up of short stories published in the ’forties) is discussed as an instance in the problematic attitude of White science fiction fans towards Blackness.

Chapter 2, “Space Race Woman,” deals with both Lieutenant Uhura, the first major science fiction television character to be both a woman and Black, and Nichelle Nichols, the actress who played her. This chapter bears out carrington’s thesis that fandom influences future production because, first of all, after the television series was cancelled, fans kept the Star Trek cast together and provided the audience base not only for a series of films involving them, but also for the subsequent series Star Trek: the Next Generation and Deep Space Nine. In addition, just as James Fitzgerald went from the Scienceers to do work on actual rocket science, Nichols acted as a consciousness-raising promoter of NASA as an opportunity for women and people of color to work in the agency. The chapter title is particularly multilayered, as the period of the space race between the U.S. and U.S.S.R. provided the historical backdrop for her efforts, plus she was both a representative for her race and her gender. In addition, in chapter five carrington will return to the Star Trek franchise to discuss ways in which Deep Space Nine, and in particular one episode, “Far Beyond the Stars,” and its novelization by a Black writer, Steven Barnes, Far Beyond the Stars, go beyond the earlier iterations of the Star Trek franchise to address issues of racial marginalization. An intricate analysis of the Black hero of Deep Space Nine and a twentieth-century Black writer for a science fiction magazine, played by the same actor, brings together the past suppression of Black talent and the possibility of future heroism and agency on the part of a Black space officer.

Two chapters focused on Black superheroes in comics assess the significance of Storm—the Marvel Comics’ Black woman and the various associations of her with an African village, a member of the X-Men, as a storm goddess, and a manifestation of the esthetic of Blaxploitation films in the comics—and Milestone, a Black-owned comics publisher that had a delicate balancing act to perform because of its association with the mainstream D.C. Comics. The latter relationship resulted in a crossover between a D.C. superheroes series and Milestone’s own Black-populated series, bringing Superman readers into Milestone’s sphere of influence. The particularly Black perspective that informs the latter comics includes a consideration of the attitudes of W.E.B. Dubois and Booker T. Washington as models for emulation or rejection by twentieth-century Blacks.

The final chapter broadens the cultural perspective on Blackness through the inclusion of British Black-diasporic characters in the Harry Potter fanfiction corpus. The author reveals that he “joined an online social network for the purpose of sharing and commenting on fan fiction” (201), where he is both a writer and an editor. From this privileged viewpoint, carrington assesses many aspects of the slash/fan fiction culture, such as the observation that characters in, for example, the Harry Potter franchise are much more interesting to speculate on and write about if they are marginal characters, often with “queer and critical points of view” (211). He distinguishes his focus in this final chapter from the earlier ones as reflecting “on how dead media set the conditions for disseminating race thinking” with considering “ways in which users appropriate meanings and their expression from the field of cultural production today” (199). In the phrase “dead media” he recalls Orson Welles’ reflection on the fact that a finished film is kept in cans; canned things are not very fresh.

There is a tension in this book that is to a certain extent reflected in the language: carrington acknowledges that this book originated as his doctoral dissertation, and there are places where the language is obviously chosen for a committee of specialists in certain academic fields. However, very often these passages are translated, as it were, into more direct and popular speech. This dual-purpose outreach is reflected in carrington’s comment in his discussion of crossover: “Crossover is, furthermore, a way to describe the movement across the field of cultural production that takes place when works produced in the academy, like this one, address a popular audience” (118). Speculative Blackness presents a multi-pronged consideration of the relations between Blackness and “the Whiteness of science fiction,” and between the range of popular genres including television, movies, novelizations, on the one hand, and the fans’ creative receptions of these works through fanzines, fanfiction, letters columns in comic books, and other literary and paraliterary productions. The book is a real eye-opener for some readers, such as this reviewer, and has a trove of hidden historical gems for the reader interested in the “back side of the tapestry.”
Posted by Djibril at 15:00

This was one of my favorite books from last year. I'm glad it's getting attention here!!!