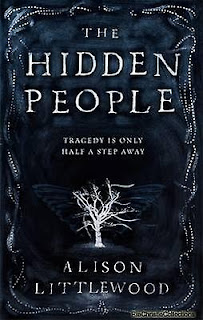 I’m going to make this clear right out of the gate; I went into this book with a certain amount of trepidation. Some time ago, I read Littlewood’s first novel, A Cold Season, and I honestly wasn’t impressed. I found it predictable, riddled with plotholes, and starring a heroine whose decisions I could not fathom. On the other hand, I’d encountered a number of Littlewood’s short stories in the pages of various Best New Horror and Best Horror of the Year volumes, and frequently found them amongst the most enjoyable in the books. Well, let it never be said that I am a woman with a closed mind; I decided to give Littlewood a second chance. And a dark, gothic, period novel featuring a murder, faeries, and mysterious pregnancies seemed like just the ticket.

Albert (Albie) Mirralls is a typical Victorian gentleman, with a wife, a domineering father, and a weird obsession with his rural cousin Lizzie, whom he met only once in his life. When Albie finds out darling “Linnet” has been murdered by her superstitious husband, he journeys to her hometown of Halfoak to uncover the circumstances behind her death. What he discovers is an insular village right out of The Wicker Man, myriad stories about the local faeries, and that Lizzie’s husband burned her alive because he believed she had been replaced by a changeling.

Littlewood states in the novel’s afterword that she got the idea to write a Victorian period piece when she was asked to contribute to an anthology of stories featuring Sherlock Holmes. It’s clear that she’s done a lot of research in the style and tropes of the literature of the era, as this novel reads very much like a book written at that time. For me, this was actually a detriment, as I am not a massive fan of this particular style, finding it rather stodgy and overblown with descriptions. However, this is purely a matter of personal taste; I know a lot of people who love this style, and Littlewood has all but perfected it. The reader has no difficulty accepting these words as those of a sophisticated Victorian gentleman, and that is to be commended.

The entirety of the novel is told from Albie’s point of view, and this is also one of its strongest characteristics. Part of the horror and mystery of the tale comes from the reader’s slow realisation that Albie is a terribly unreliable narrator, and that his actions and perceptions are probably not as rational and righteous as he believes them to be. It’s particularly satisfying to see his wife call him out about his frankly creepy obsession with his dead cousin (I don’t think I’ve ever wanted to high-five a character that badly).

On that note, I’ve seen a few other reviews calling this novel misogynist because of its somewhat thin female characters and seeming fixation on the childlike, virginal Lizzie (who is strongly contrasted with some of the coarse, unmarried women of the village), but to me this is a deliberate action on the part of the author. In fact, I was prepared to go on a rather scathing rant about Albie’s madonna/whore complex and his continual refusal to see his wife as a human being until I realised that was exactly what the author intended, making the story a rather neat and carefully crafted subversion of these tropes. We have to remember that the entire story is coming to us through Albie’s eyes, and realising the way that he is viewing the women around him is part of coming to understand the story and is building the road to the twist at the end.

I think that we’re all rather tired of twist endings at this stage, but this is one of the good ones. A good twist ending makes the reader/viewer reflect on the story and all of the events in a new light, and find new meaning in all of them. The Hidden People does this and does it well, bringing new relevance to all of Albie’s actions and his thought processes. And it also gives the ending an ambiguity that I suspect some might find frustrating, but that I really enjoyed. At its core, I think it’s not the reality of the situation that matters, but rather it’s about coming to know oneself. In particular, coming to know oneself and realising that you may not like, or even be able to stand, what you are coming to know.

I think the one major complaint I have isn’t about what’s in the novel, but rather about what isn’t. There’s a plot thread involving the local lord’s son that seems at first will have great bearing on the plot, but in the end it goes nowhere. I’m guessing, given the amount of ambiguity and mystery in the plot, that this was meant to be a red herring, but I just found it irritating rather than misdirecting. It felt like an unnecessary dangling thread on an otherwise tightly knit plot.

Overall, The Hidden People is a well-constructed, intriguing, and tightly plotted story about murder, ignorance, arrogance, obsession, self-realisation, and ambiguity. While I may not have personally enjoyed the Victorian style, I cannot deny the level of craftsmanship behind it, and I was able to see past it to a rich and intriguing story within. Littlewood and I may have had a rocky introduction, but I’m going to be taking another look at her work from hereon in.
Posted by Djibril at 16:19