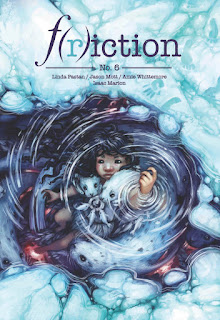 F(r)iction Magazine is a glossy, high quality, fabulously produced journal of literary speculative fiction, and it achieves all of the above in spades. The first thing that strikes you when you unwrap the magazine is the quality of the images; the cover is glossy, textured, beautifully designed and printed on the highest quality materials. This continues inside: each story, poem or feature is accompanied with well-crafted imagery, expertly interacting with the text. At $20 for 124 pages of this, both the artifact and the words are excellent value for money. Production is high throughout, from selection, sequencing, copyediting through to illustration and typesetting of the contents. Most of the content in speculative in one way or another, mostly in the magical realist sense that would not be sneered at in a literary venue; but it is also literary, in the sometimes cold, style over substance, and unsympathetic way that more unapologetically speculative works manage to avoid. Seven short and three very-short stories, almost a dozen poems, a graphic story and an interview and novel extract are crammed into the high-definition, gloss-finished pages of this colorful issue, which feels bigger than it looks from the outside.

One of the key differences between the genre that calls itself “literary” and the more popular genres that include the speculative, seems to me to be that the former eschews happy endings, satisfyingly resolved plots, heroes, straightforwardly relatable characters, and stories that are only about what they are about, almost as a point of pride. And so several of the stories in this issue—allegorical, magical, prose-poetic, surreal or plain silly—feature characters to whom many readers will have difficulty relating. There are the death-obsessed, self (and each other)-harming, mountain-climbing lovers in Ben Janse’s slightly absurdist “Only Space Above;” the oneiric, voyeuristic ghost in Brij Bajwa’s bathetic romance “Melancholy Dreams;” the creepy expat English conversation tutor in A.C. Kock’s only partly successful attempt to invert Far East exoticization in “Cinema Lessons;” the uncommunicative denial of the couple in Casey Guerin’s nonlinear yoga parable “Push/Strain.”

The piece that I found the strongest of the longer texts in the issue, Christian Holt’s “The Dream Eaters,” similarly does not rely on sympathetic characters, resolution of plot, or simple interpretations for its success as a story. Two young teenage girls spend summer camp feeding off the nightmares of their contemporaries, a barely explained activity that is as much for their own health as their camp-mates’ sanity. Coming of age and sexual awakening combine with unexpected failure of their supernatural mission to create a monster that turns children into sociopathic, brutal, frightened, dangerous and hard-to-control individuals and groups (into fairly regular teenagers, in other words—at least as presented in horror fiction). This story does allow a few more of the tropes of the horror genre to temper the cold literary tone of some of the surrounding work, at least inasmuch as this doesn’t step too far away from the unsympathetic, unreliable, problematized narrative at the core. My rather fussy genre-analysis aside, this is a very readable, original and relatable dark story.

The one graphic story in this issue, “Genevieve” by Erin Mehlos, is a beautifully illustrated comic in high-contrast, sepia tones reflective of the old southern gothic setting. It features an insufferably superior and chauvinist white male protagonist in an exoticizing and appropriative nineteenth-century New Orleans-esque setting; this is a metafictional story—the protagonist is an author and his writings appear on our page at the center of the story—and so it is never entirely clear if the clichés and clumsy representations are on the part of the internal author or the external one. The ending is satisfying on many levels (a rare genre intrusion into these literary pages!) although thoroughly predictable and does not really undercut its own stereotypes, neither the Voodoo nor the femme fatale figure.

Of the several groups of poems in this issue, the most successful and interesting is “Writing Dreams on Butterfly Wings,” which collects four poems from members of the Girls Write Now mentorship program for underserved young women in New York. All are wonderful pieces, but I’ll comment briefly on just two here. Jane Liu’s “Butterfly Wings” is a gorgeous, two page-long poem in eight stanzas, which is simultaneously a beautifully observed account of the life cycle of a butterfly, and a subtle, sympathetic, and sophisticated parable for the fragility, danger and temporality of revolution. Read it. I’d love to find out more of what Liu has written. “Broken” by Shakeva Griswould is a short poem that poignantly tells in the voice of a frightened child why Black Lives Matter is a slogan of survival, not of offence. The Girls Write Now program is an exciting and valuable mentorship scheme, and I suggest you all find out more about it, and support them if you can.

Although inevitably not everything in this issue was to my taste (which could never be the case for a magazine I don’t edit myself!), F(r)iction Magazine is as I observed above an exquisitely put together collection of fiction and art, a magnificently designed artifact, and a bold, beautiful publication. Almost nothing within its pages was not worth reading (a couple of the more jokey short pieces left me cold), and I have very high hopes for this and other publications from Tethered By Letters in the future.
Posted by Djibril at 13:08