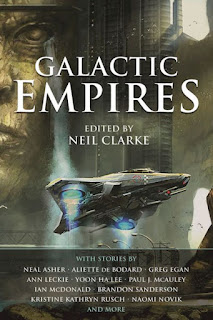 I opened Neil Clarke’s anthology Galactic Empires and Jeffty was five again! So many of the dear old exciting space operatic epic short story types but written in a fresh vein, as if tales of, in, and around Galactic Empires had been ongoing and are indeed still evolving! Instead of proceeding methodically from the first story to the last in sequence, I skipped right to the Robert Silverberg, “The Colonel Returns to the Stars,” knowing that the author has developed planets, empires, histories, and tales of people hidden in other people, submerged personalities looking out through the eyes of some apparently other people. He did not disappoint, and brought hints of an ancient empire that had gone long before the current empire arose, resulting in two networks of instantaneous transmission through wormholes from place to place. He uses the trope of that kind of instantaneous travel much as Frank Herbert did in Dune: the threat of a world denied access to those portals describes the ultimate in isolation on the galactic scale: it becomes a world set back on its own resources, denied trade and contact with anyone else besides that world’s own inhabitants, who are stuck with each other. An interesting dilemma.

All of the stories in this collection deal with life in the context of some sort of galaxy-wide collectivity of some sort; some of them deal with the very core, or perhaps the apex, of that collectivity: Brandon Sanderson’s “Firstborn,” for example, deals with the threat that a flawless military hero poses to the ruling emperor, and the surprise backup plan that had been devised decades before to deal with this eventuality should it materialize. Steve Rasnic Tem’s “A Letter from the Emperor” emphasizes the distance between the Emperor and someone who may once have known him in their youth, dying on the far edge of the galaxy, compounded by the loss of many of the dying man’s memories as a result of a procedure used long ago to examine the memories of a platoon that may have had an infiltrator. As is evident from even this very sketchy outline of the story, there is an emphasis here on loneliness and isolation both in space and on the furthest outposts of a possibly dying empire.

Not all of the selections use the term “Empire” to designate the galactic collectivity; among the terms used—with their appropriate shadings of distinction—are Empire, Clade, Amalgam, Confederacy, Solar League, AIRA (Allied Interstellar Research Association), Union—this is only experienced through the tale that a representative of it tells a passenger on the Great Ship, which itself “has the mass and volume of Uranus, with engines bigger than moons and fuel tanks that can swallow oceans whole” (438) and which has sections that have not ever been mapped—Galactic Federation of United Planets, Federation, the Fleet, Earth Alliance, Imperium (twice), League of Man, and the Polity.

For the most part, the stories deal in distances and time periods that are so immense there is a kind of inflationary language, by which people live for thousands of years, or skip thousands of years in making leaps through space/time, or even, in Robert Charles Wilson’s “Utriusque Cosmi,” people living for brief periods intermittently, thus both extending their lives further and making more room for others living intermittently in the interstices. This last story is, interestingly enough, a kind of Rapture for the science fiction imagination, and alternates between a very particular down-to-earth scenario of a young woman living with her single mother and her mother’s murderous boyfriend in a trailer in Arizona, on the one hand, and living with a being named Erasmus, “a knot of shiny metal angles about the size of a microwave oven, hovering in mid-air, with a pair of eyes like the polished tourmaline they sell at those roadside souvenir shops” (393). In other words, sections of very vast abstractions alternate with sections of an almost kitchen-sink realist specificity.

At times, the temporal and spatial expanses are so immense, and the scientific and mathematical operations used to penetrate or otherwise negotiate them that this reviewer felt adrift in an Ether of terminology, or perhaps some advanced trigonometry. In Greg Egan’s “Riding the Crocodile,” for example, a married couple decides to contact The Aloof—a putative species residing in the galactic core, and rejecting every probe sent by members of the Amalgam living on the disk of the galaxy. In this attempt, the two conceive and construct some sort of apparatus—perhaps, a Happening would better describe the invention—consisting of three “bullets” and some sort of “beam” adding up to “collision braking with three components” that somehow would… well… attract the interest of these entities. Reading a story with such either advanced or purely imaginational technologies like this is like watching a film in another language without subtitles—if it’s a good film, as this is a good story, the energy of the actions and the interpersonal interactions carries the narrative, and the actual words are not important. What is important, then, about such stories as this, Tobias S. Buckell’s “A Cold Heart,” Neal Asher’s “Alien Archaeology,” and Aliette de Bodard’s “The Waiting Stars” is the willing suspension of disbelief concerning technologies that are beyond this particular reader’s vocabulary. “Verthandi’s Ring,” in this vein, by Ian McDonald, seems like a cross between Larry Niven’s Ringworld and Rudy Rucker’s Spacetime Donuts. I read the story with some enjoyment, but I was not sure what happened.

Ruth Nestvold’s “Looking through Lace” and Naomi Novik’s “Seven Years from Home” both involve the gender gap and the attempt to understand a culture from the feminine perspective. Nestvold puts a female linguist on a world where women speak a language among themselves, and never speak it to men. Novik puts a female diplomat on a world where one species, which has developed a totally biologically based technology to live sustainably, is being encroached upon by another species, which is bent on expansion and raping the environment of its resources for their commercial growth. Nestvold’s story has affinities with linguist Deborah Tannen’s You Just Don’t Understand: Men and Women in Conversation, while Novik’s is an example of ecofeminism. Neither story is dominated by ideology; both have convincing plots and, for lack of a better word, “relatable” characters.

Another recurring thematic element is, beyond whatever name the “empire” is given, the existence of the Other. Whether The Aloof in “Riding the Crocodile,” the Invisible Enemy in “Utriusque Cosmi,” or the Enemy, very simply, in “Verthandi’s Ring,” some of the stories focus on the existence of life itself in the face of something so very foreign to it that there can be no coexistence… except, perhaps in one case that I will not mention so as not to spoil the surprise.

This is an engaging anthology with a wide variety of themes and approaches, and that should appeal to science fiction readers of all generations. Even though it can be great escapist reading, at the same time many of the stories are shot through with themes applicable to contemporary society on this island Earth.
Posted by Djibril at 09:48