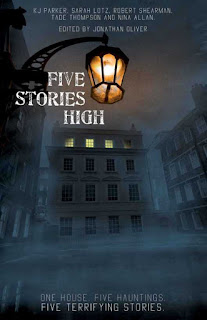 I am not going to lie, when I saw the new Jonathan Oliver anthology on this month’s list of titles to review, I all but got on my hands and knees and begged for it to be given to me. I have read all of Oliver’s previous anthologies, and were it not for their low number I would be putting Oliver’s name up there with that of the incomparable Ellen Datlow on my personal list of favourite anthologists. Add to that the fact that this anthology featured five interconnected novellas centered around a haunted house, one of my favourite horror sub-genres, and you had one happy reviewer. So, did my happiness hold?

Let’s start with the basics. Five Stories High is a collection of five novellas, all centered around Irongrove Lodge; a centuries-old building that has been, at different times, a sanitarium, a rest home, a family home, divided into apartments… and in every one of its incarnations, dark, inexplicable events occurred within its walls. These novellas tell the stories of five such events, and are bookended by various ‘Notes on Irongrove Lodge’ written by Oliver. These five stories are all very different and connected only by their setting, so I think it’s best to look at them each individually.

Our exploration of Irongrove Lodge begins with ‘Maggots’ by Nina Allan, which is also the only story where the majority of the action does not take place at Irongrove Lodge itself. Instead, ‘Maggots’ is a mystery about family and alienation, and about how people can disappear and reappear from our lives. Particularly about what can happen when the person who reappears doesn’t seem to be the same person who vanished. It’s not a story that is completely to my taste, but Allan is an excellent author and the tale is written with her usual level of skill. It could also be seen as a very neat and intriguing metaphor for the way certain mental illnesses can be passed down through families, and the difficulties of coming to terms with the psychiatric problems of not only beloved older relatives, but oneself.

K.J. Parker’s ‘Priest’s Hole’ is the next story, and probably has my favourite opening lines: “I hate this house. It’s freezing cold, it eats people, and it stinks of petrol.” Grin. The main character of ‘Priest’s Hole’ is a man who mysteriously gains the ability to shapeshift into any other human being. This premise could be taken in a number of different directions, but I found the protagonist’s actions upon discovering this power both sensible and realistic; he monetizes it, making his living by providing alibis, cashing cheques to help businessmen avoid taxes, even mimicking the recently dead so their grieving families can get one last photo. Honestly, it’s probably what I’d do under similar circumstances. Beyond that, however, this is probably my least favourite of the five stories. It’s not bad by any means, but it has a rambling, almost surrealist style that I personally found more irritating than compelling. It’s ostensibly about the horrors of losing one’s own identity, and I can see how many would find it chilling. I, however, found the constant dancing around an explanation of the main character’s powers and the disappearances of those around him more than a little annoying by the time the story ended. Well-written, an intriguing premise, and with a black sense of humour that made me smile, but overall not to my taste.

At this point, I have to admit, I was a touch apprehensive. The book’s cover promised “Five terrifying stories,” but so far neither of the two stories were what I’d call horror stories, more on the spectrum of “weird fiction.” It wouldn’t be the first time I’d picked up an anthology advertised as a horror collection only to find many of the stories didn’t match that genre, and it’s one of my personal pet peeves. Fortunately, the next story is Tade Thompson’s ‘Gnaw.’ Hoo baby, is this horror, and such a beautiful example thereof it would take Best of Breed at a genre-based Crufts. It’s also the first story to make use of Irongrove Lodge’s illustrious history. It’s a classic horror setup; nuclear family consisting of over-eager husband, suspicious wife, and 2.5 children move into creepy old house, and terrifying things proceed to happen. I don’t want to say much more, because I don’t want to spoil the effect of reading the story yourself, but I will say that some of the imagery described in the narrative gave me genuine chills. There is a deep undercurrent of misogyny, both blatant and subtle and from both the spirits and living characters, that makes it an uncomfortable read in the best possible way. On a personal note, however, anyone who names their horse “Bellbottom” deserves to be bucked off.

The next tale, ‘The Best Story I Can Manage Under the Circumstances’ by Robert Shearman, is probably the story I was looking forward to the most. I don’t think I’ve ever read a story by Shearman that I didn’t like… or seen one, for that matter: ‘Dalek’ is one of my favourite episodes of the new Doctor Who (random fangirl moment: Nine is and always will be best Doctor—haters gonna hate). So my expectations were high coming into this one. I’m glad to say that my expectations were met, though I will say this is another one of the stories I’m not sure I’d call horror… this is definitely in the ‘weird fiction’ genre, but it’s dark and twisted enough that I didn’t find it out of place in the collection. The tale revolves around a little boy who finds a mysterious door appearing in his room every year on his birthday, and what he eventually finds waiting for him beyond that door. There is also an intertwining narrative about a child born in pieces, with each limb being delivered by a different mother. It all wraps together in a tale about the forming the dissolution of families, about abuse and how it can go hand-in-hand with love, about Oedipal complexes and the loss of innocence, all served up with some genuinely gruesome and disturbing imagery. Robert Shearman remains a name I am delighted to see in any table of contents.

Finally, the last story is probably the one I was anticipating the most after Shearman’s contribution; this is Sarah Lotz’s ‘Skin Deep.’ I have read and enjoyed many of Lotz’s pieces in other anthologies, and you may also know her as one half of the collaborative pseudonym S.L. Grey, the mind(s) behind the highly enjoyable Downside Trio. I had high hopes that this would be the perfect, creepy closer to a so far satisfying anthology, and I wasn’t wrong. ‘Skin Deep’ turned out to be my favourite out of all the novellas; it was tragic, blackly humourous, suspensful, and gloriously gruesome. Written in the form of interviews with family, friends, aquaintances, employees, and the (supposed) perpetrator, ‘Skin Deep’ tells us about a couple who moved into a beautiful new flat, only for horrific tragedy to strike; a young man dead, his older female partner arrested for his monstrous murder. The protagonist’s testimonial in particular is a heart-breaking recollection of watching a loved one be lost to madness, and knowing that perhaps they could have been saved. I won’t say anything more about the plot for fear of spoilers, but I will say I wish the story had been a bit longer. The conclusion, while satisfying, felt a bit rushed, and I felt that the story behind this incarnation of Irongrove Lodge could have been a bit more developed. But those are minor quibbles; I rushed through this story, loving every skin-crawling minute of it.

So, five stories, three I loved, and two that I acknowledge are well-crafted, just not to my taste. This probably sounds like the perfect anthology… and it almost is. If this were just a collection of haunted house stories, I probably would call it perfect. But it’s not; it’s meant to be a series of interconnecting narratives about the same place; at least that’s how it was marketed. And none of the narratives connect. At all. I could probably have forgiven this… an anthology I’d previously reviewed, Psychomania (edited by Stephen Jones), tried the same tactic using previously published stories (which obviously could not be interconnected). Instead, the editor connected the tales with a wrap-around story told in various inserts. When I saw that Oliver had begun and ended each story with his ‘Notes on Irongrove Lodge’, I assumed that he was doing something similar… but he wasn’t. The ‘Notes’ are simply two or three page vignettes about or set in Irongrove Lodge, but seemingly have nothing to do with the story they proceed or follow (not without some stretches of the imagination, anyway). This left them a rather pointless inclusion, and made the entire structure of the book feel more than a bit… well, I hate to use the word ‘shoddy’, but I really can’t think of anything else. There’s nothing wrong with the ‘Notes’, they’re quite well-written and interesting, but they don’t serve their purpose. I think Oliver missed a rather golden opportunity by not tailoring the ‘Notes’ to the various novellas, and I’m frankly not sure why he did so.

But that’s really a very minor issue. Overall, this anthology is a delight. There’s not a bad story in here, though they do run the gamut from very gruesome body horror to surreal weird fiction, each of them a joy in their own way. Whether you prefer K.J. Parker’s more psychological stream-of-consciousness theater of the bizarre or Sarah Lotz’s bloodbath, I guarantee you’ll find something to enjoy in this collection. Jonathan Oliver maintains his place as one of my favourite anthologists, and I can’t wait to see what he comes up with next.
Posted by Djibril at 14:42