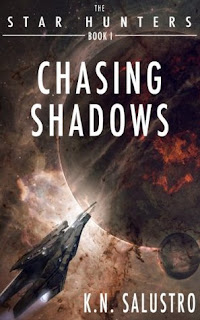 I’ll admit, when I was waiting for my review copy of Chasing Shadows to arrive in the mail, I wasn’t sure what to expect. After all, author K.N. Salustro opted, in this case, to self-publish—not that I have a problem with that, since I self-published a work of my own (creative non-fiction and poetry, in that case). Still, self-published offerings can run the gamut. I’m pleased to say that in the case of Chasing Shadows, the story delivered in a number of ways.

The novel begins with a female bounty hunter known as the Shadow executing a contracted hit on a Star Federation officer. Naturally, this puts the Shadow in the cross-hairs of the authorities. In anticipation of the ensuing hunt, the Shadow, who we also come to know as Lissa, has arranged for a smuggler ship, the Resolution, to ferry her to safety. She quickly realizes that Montag, the Resolution’s captain, has double-crossed her. However, when control of his ship is remotely assumed by hostile forces, Montag accepts Lissa’s help in countering the hack. This is the first in a series of tenuous alliances Lissa forms as she flees a foe she fears even more than the Star Federation—with good reason.

When I read a novel billed as a “space opera”, features I’m hoping to see include different cultures, species, and planets, and plenty of action. Salustro doesn’t disappoint. She envisions a number of races, humanoid and non, including the blue-skinned and antenna-equipped Yukarians and the lizard-like Hyrunians, as well as the arkins, a species of winged felines. The latter, I must confess, were among my favourite creations in the novel, and Salustro utilizes their presence to good effect, incorporating them in fight scenes. Since they are able to carry their human companions, the arkins add another dimension to the story, enabling different methods of escape, exploration, and rescue. Meanwhile, their relationships with their human companions in turn assist in character development.

Lissa, aka the Shadow, is one of a select group of individuals who make a living carrying out contracted hits to collect bounties. Salustro takes things a step further and describes a whole protocol around bounty hunting, including having to show up in person for your payoff. I found this intriguing, but also found myself wondering why, in a future society, there wouldn’t be a more automated method of transferring funds, using whichever planet’s banking system was most sympathetic to those who operate on the wrong side of the law. It’s not the most efficient system to have to travel across the galaxy to collect and conversely deliver a payoff. Nonetheless, that’s just an observation—clearly it’s the author’s right to incorporate what she sees fit in terms of the politics and practices in her universe.

Another key party of interest in Salustro’s novel is the Neo-Andromedan race, who are themselves the outcome of efforts on the part of the Andromedans to create a kind of “super-human” species. The fact that the Andromedans used human DNA, taken from unwilling subjects, is a sore point for the Star Federation and its allies. There is no love lost between the Neo-Andromedans, slangily referred to as “Nandros”, and the Star Federation—not surprisingly, since the two sides engaged in a bitter war which ended four decades ago, followed by an attempted purge of Neo-Andromedans.

A militaristic subset of the Neo-Andromedans known as the Seventh Sun is intent on “establishing Neo-Andromedans as the most powerful race in the galaxy” (p. 152). This is no idle threat, since ten Neo-Andromedans prove capable of dispatching a hundred Star Federation soldiers in the course of the novel’s action. Particularly dangerous are a subset of Neo-Andromedans who have been “Awakened”, a process which creates in them a hunger to kill.

I felt the first few chapters of Chasing Shadows were a trifle slow. However, once the action got underway, I found myself being pulled through from chapter to chapter. Salustro uses several devices to create tension and suspense. For one thing, she sprinkles in plenty of conflict between characters—for example, verbal confrontations between Ashburn and Captain Jason Stone; spats between Captain Jason Stone and Captain Erica Anderson, with whom he’s having an affair; and verbal disagreements between Montag, the captain of the smuggler ship, and members of his crew.

Another device Salustro employs is the gradual feeding of information. For example, we don’t learn until part-way into the book that the Shadow is herself a neo-Andromedan. While we know part of her motivation for bounty hunting is to raise money for hospital fees, we don’t know what relationship the ill person has to her until we’re well into the story. Tension is further increased when the reader is privy to information that other characters—Ashburn, for example—do not know.

Finally, the chase and flight scenes, which take place in a variety of venues (on spaceships, on planets), and in a variety of ways (dogfights between fighter ships, physical chases and confrontations, and flight by means of spaceship and arkin) support the building of suspense.

Did the book have characters I cared about? Absolutely. The fact that Lissa’s motivation for bounty hunting is to earn money to pay hospital fees for her ailing brother makes her an empathetic character. Commander Lance Ashburn is a guy who’s trying to do the right thing, even if that means bucking what his superiors might say. Captain Jason Stone doesn’t shy away from conflict with Ashburn, but at the same time, he maintains enough of an open mind to acknowledge that the Star Federation’s party line may not be the be-all end-all. As well, Blade and Orion, the arkins aligned with Lissa and Ashburn respectively, are intriguing characters in their own right.

Salustro tells the story mainly in third person, but provides variety and the opportunity for fact-finding and plot advancement by presenting the action from different characters’ viewpoints, chiefly using Ashburn and Lissa as her point-of-view characters.

My main complaint is that I felt the novel would have benefitted from a stronger edit. For example, there were some instances where the wrong word was used: “…how Coleman would fair in that matchup” (p. 27) (should be “fare”), or “his face and his body were all hard angles and plains” (p. 207) (should be “planes”).

Some of the phrasing struck me as awkward. In many cases (but not all), the wording was related to attribution of emotion to inanimate objects; for example, “[the pistol’s] momentum felt anxious” (p. 1), “the engines brightened eagerly” (p. 33), “outrage began to crawl out of his eyes and over his face” (p. 65), and “their breathing sawed at the edges of his mind in a set rhythm…” (p. 232). I appreciate the author’s efforts toward original turns of phrase. However, I found myself stumbling over the wording in some cases, which from my perspective detracted from the story’s flow.

From the viewpoint of social conscience, one of the novel’s messages (intentional or otherwise) is that a sect within a culture or race doesn’t necessarily represent the views of all members of that culture. The Seventh Sun, for example, poses a significant threat to the Star Federation, but that doesn’t mean that all Neo-Andromedans share their views and ambitions—in fact, some of them dread being recruited by the Seventh Sun. Getting the Star Federation to buy into this, Lissa realizes, will be a challenge. The differing views within the Star Federation toward the Neo-Andromedans (for example, one officer suggests that all Nandros should be shot on sight) contribute to the tension that keeps the book moving forward.

Chasing Shadows is the first of the Star Hunters series. The sequel, Unbroken Light, was published in November 2015, and Salustro is currently working on the third book. I found Chasing Shadows sufficiently intriguing to build an interest on my part to learn what befalls Lissa and the other characters in the sequel.

One quibble some might have with Chasing Shadows is that the ending leaves some loose ends—well, one in particular. Given the novel’s sub-title (The Star Hunters: Book 1) I considered myself forewarned that it was intended to be the first in a series. That being said, I’ve seen first-of-series-books with tied-up endings, so if definitive conclusions are important to you as a reader, be prepared to find that particular desire unfulfilled.

Chasing Shadows is Salustro’s first novel, and in that context, it’s not surprising that there are some rough spots, such as those cited above. That being said, I found this novel a satisfying read overall. If you’re looking for an original bit of world-building that provide a healthy dose of suspense and surprise, then Chasing Shadows may be your ticket.
Posted by Djibril at 16:46