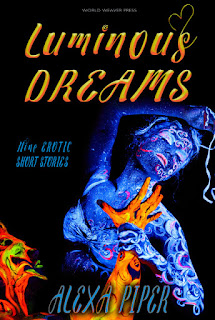 This short collection from World Weaver Press was first published by Red Moon Romance (a small press now absorbed by WWP) a couple years ago, and has acquired one additional story in the process of being reprinted. Luminous Dreams now contains nine short stories of speculative romance and erotica by Alexa Piper, who has a handful of paranormal romance short stories in anthologies, and additionally has a background in fanfic and other popular writing communities. The writing is fun and lively, varied in genre and setting (if not so much in style), and features a parade of women who know and are unashamed of what they want—even if what they want is mostly pretty vanilla sex with dominating, bordering on the creepy, men who are so handsome that the protagonists flush and almost lose control on first seeing them. The romance themes are often a bit limited, and the sex only occasionally sexy… to this reader—although as a bisexual girlfriend once pointed out on being disappointed at reading the legendary Anaïs Nin, erotica is so personal, that anything a little bit edgy is not going to be to everyone’s sexual tastes. A few of the stories are genuinely original and interesting in their setting and narrative (beyond providing a backdrop for a couple of fucks).

There is something quaint about the very traditional language used for sex, and especially sexual organs, in the romantic end of erotic writing: Piper’s narrators and characters refer to a woman’s parts as her “center,” “pearl” or “wetness”; men’s parts are his “manhood,” “shaft” or “member,” rather than any more vernacular terms. This convention of the genre extends to a limited range of gender roles and sexual appetites: most of the encounters in this collection are heterosexual, male-dominated, and fairly missionary/vanilla with a side of creepy/manipulative. The volume opens, in fact, with the mysterious and magical “Phoenix and Styx,” in which the male interest, in the process of bullying the female lead into bed, speaks the telling lines: “And you have wanted someone to stare at you,” and even classier, “But keep the heels, they suit you.” Christian Gray levels of romantic banter, there.

There are a few, albeit partial, exceptions to my characterization above. In the insufferably silly “Candy and the Witch” it is the woman who is sexually and emotionally dominating, although the “money shot” sex scene still involves the man taking physically control, once he has been given permission to. In the companion piece, “Drinks and the Other Witch,” there is a completely emotionless and one-off male-male sexual encounter, of course a staple of erotica targeted at heterosexual women. The protagonist is double-teamed by two vampires, named Darius and Alexander, in “Nocturnal Conquests,” in the closest to a non-standard or polyamorous sexual configuration—but only after they have mesmerized and abducted her, consent being apparently irrelevant to the story.

The one female-female sexual encounter in this collection, in “Acorn Princess,” is at once moving and sadly stereotyped; the protagonist, an unhappy, closeted bisexual, finds release in being seduced by an inhuman dryad. Although the encounter is described as “love,” it seems that its purpose is to allow the woman to continue her life “only kissing boys” in the real world, while returning to her secret forest love whenever she needs something different. I was a little bit uncomfortable with this representation, which is not by any means everyone’s experience of what it means to be bisexual (and potentially feeds into some biphobic tropes of the secret cheater), but this story is surely meant as erotica, aimed at titillation, with no pretension to inclusion or social commentary, so perhaps this stereotyping is forgivable.

The most successful story, and the one that breaks the conventions of this volume and genre the most clearly, is “The Night Train: Story of a Passage,” in which a disaffected young woman, Taite, takes a break from her nine-to-five life to “find herself” and backpack around the world. After an odd reflection on the similarities of “small European towns” (even odder consider when she turns out to be in Paris to catch the Eurostar to London), Taite accidentally boards a “Night Train” full of wild faerie creatures, and ends up being double-teamed by a pair of horned, unseelie hunks. A more convincing and sensual—and kinky—threesome than that in “Nocturnal Conquests,” involving voyeurism and exhibitionism, the sex in this story is not only enthusiastically consensual, but leads to Taite turning the tables on the fae who expect her to make a meaningful decision, instead choosing not to be tied to the expectations of others or to her boring life. This is a story that is both original, engaging, and empowering.

While the collection as a whole is not as original or deeply speculative as some of the best in this genre (in most stories, the paranormal backdrop is a setting for sexual activity, rather than changing the nature or physical character of sex in any way), the stories in Luminous Dreams are generally fun, lively, and sexy within the parameters of the genre. A few stories reach beyond mere competence to originality and high quality, which is already not bad from a single-author collection.
Posted by Djibril at 12:57