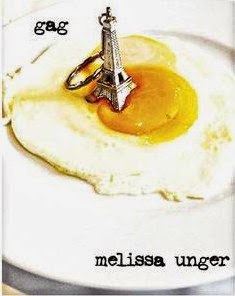 This is, effectively, a story of two halves. In the first, we meet Peter, a rich New York drifter, who one day stopped eating and has managed to get along perfectly healthily for fifteen years. Having finally decided to try again, he travels to Paris, as a centre of gourmand delights, to tempt his body back into eating. On the plane he meets Dallas, a hugely fat Southern state gentleman, and then bumps into him again, singing in a queerly feminine voice at a seedy night club. Now for part two: Dallas, knocked down in a hit-and-run, is revealed in hospital to be Claire. Recuperating from her injuries, Claire joins Peter in his apartment, and from here we plunge into an emotional drama as two dysfunctional people try to grasp a sense of normalcy and meaning from the very people that know least about it: each other.

I tried to like Gag, I really did. It started great, with themes spinning out from the un-eating Peter as wide-ranging as the reaction of Self to Other and how circumstances biological, historical and social can lead to the ostracism of self from society. At a profounder level, it appeared to deal with how one becomes ostracised from oneself, losing meaning. Peter and Claire are drifters, very differently circumstanced. One is rich, one poor; one male, one female; one secluded, one violated, but at either end of the spectrum lies the same painful loneliness. This was because of part one, and part two in reference to part one in hindsight. But in part two, it started to unravel, the plotting becoming messy and self-indulgent. Unger keeps the action tight between the two protagonists, but the stylistic positive of claustrophobic intensity this generates does not detract from the fact that what started so promisingly becomes melodrama crossed with a music video’s visuals.

Let’s go into a little more detail. To begin, Peter is a rich kid from a distant family. His only human contact with them for years are phone calls with his mother, who automatically assumes he is in trouble and/or needing money. This is not a close family; Peter is lacking human affection. Drifting through university with no great outcome to show for it, he drifts into a sort of Bohemian non-existence in an arty quarter of New York. Having no monetary worries, he lacks drive to get out and ‘do’. He lives alone, he occasionally writes articles and he becomes an object of fascination for younger bo-hos as the man apart as someone removed from the everyday; idolised because he has very little relation to daily reality. Yet he is no great, pure character; he languishes, he is bored, he meanders with no inspiration. In order to become someone apart, he has lost much of what would make him noble. Unger shows us that you cannot have both: even heroes must have their feet in the clay or cease to have meaning.

As a physical symbol of his withdrawal, Peter one day found the greasy fried egg on his café plate too much, and simply ceased to eat. Since then he has remained healthy, but living a shadow of a life. By not eating, not working, rarely mixing with others in his block, and keeping relationships short and sexual, he has a profound lack of social contact. Meaning for the self cannot happen, we suspect, in a vacuum—Unger has created a speculative protagonist redolent with significance. Having fashioned this fascinating nugget, Unger takes him to Paris, where Peter has decided he will try to eat once more. So: a stranger abroad, attempting to take a huge step back into human society away from his native customs and language. This cannot go well. If Peter’s life has been about running away before, he is only doing it again.

On the plane is Dallas. Dallas is fat, really fat, and he eats for both of them; Peter is only too happy to let him, and only too happy to leave his abrasively cheerful travelling companion at the airport. Attempting to eat an éclair and failing, Peter takes to that heroic pastime of wandering abroad. Dropping into a random nightclub, he is amazed to see Dallas singing black soul with the voice of a diva. Drinking with Dallas after this, Peter learns very little about him, and we are equally in the dark: transgender? Transvestite? Dallas’s mysterious black rucksack; all he owns in Paris, is equally mysterious. Is Dallas also running away from something? Now there are two intriguing characters, wrapped in their secrets. Then Dallas is run down, and Dallas, in hospital, is actually Claire.

It’s a story of brokenness: brokenness of the self played out in the dramas and traumas of the two characters. One is a biological freak, self-exiled from full human contact, carrying an emotional immaturity from lack of familial closeness, unable to connect. The other is broken by goodness’ knows what to become a cross-dresser, an over-eater, a sad and lonely figure prowling the edges of human contact. And they have found each other.

Now the second half of the book, and sadly for me it started to fall apart. Other reviewers have waxed lyrical on the ‘Kafka-esque’, twisted quality of the American-in-Paris anti-love story now presented. Yes, it had some elements that kicked stylistic butt. But the weighting of revelations as Peter and Claire start to pick at the layers and secrets that bind them together, yet hold them so far apart, was not so much dramatic building as dropping of ungainly clangers.

For the positives, we have two people, bound together at first through a very strange on-off, sexual-platonic relationship. The action is set primarily in the apartment, and this closeted relationship starts to feel distinctly uncomfortable; prickling at one’s mind, as you have to admit that the destructive nature of it, while being a car-crash waiting to happen, is compelling stuff. It plunges bravely up to the elbows into the muck of human emotions being wielded by brittle souls. It is a claustrophobic, spine-crawling experience with just enough of a Gaelic shrug to bear a comparison to the New Cinema movement.

But style is not enough to cover the plotting, which suffers from, as I said, clunkers. Claire’s background snippets (manslaughter of her brother, childhood rape, and physical abuse) are far too heavy for the times they are introduced. They distort the narrative, and the story starts to look like a case of Munchausen’s Syndrome, trying to throw in outrageous details to desperately keep attention; a sort of hysterical extremism. Possibly because in this claustrophobic, self-destructive love-hate relationship, where can the narrative go? While Peter drifts into a sulky teenager, Claire becomes the main focus, her odd behaviours and determined anorexia creating a sensationalism that sadly belittles the thrust of the story up to the start of this second part.

Unger’s background is very much in the visual media, working on film and TV production, and she explains in the postscript how she sat down and wrote the two halves of the book years apart, in what sounds almost like a trance-like state. Naturally, there would have been editing, but the drifting, meandering condition of writing comes across in a narrative rapidly losing itself up its own metaphorical imagery. The final sequence is unashamedly contrived. Claire, now stick-thin, having decided to eschew food (are her personal traumas just not special enough in the face of his un-defecating purity?), leads Peter on a chase through Paris, winding out the meters of crocheting she made while still living with him. As a metaphor for the narrative and for the staging of this final scene, this is a definitively constructed line of effort. And it is red for blood, for womanhood, for created life that Claire is unable to carry. It is a huge ball of needled output in a manic nesting attempt gone awry. Peter is finally lead to a bridge, and toppling easily into the river, together in the watery womb-substitute, we are told that for both of them the world finally ‘clicks’. Fade to black, bring up the inspirational credits score, and roll ’em. As endings go, it is blatant and disappointing.

What would have been far more interesting was to have allowed Claire to return to being Dallas, for her to keep her secrets. After all, the book is Peter’s point of view, and for his fractured soul to attempt to learn about another’s would have made for far better use of the intense situation, with a genuine dialectal examination of the Other in relation to the Us, either as self-imposed exile or as one socially abandoned debating in a more convincing way. The book finally suggests that even after all that, there is such a thing as a heroic journey, the undergoing of cleansing pains to reach a cathartic healing. It’s basically Classic Narrative stuff, which is disappointing after such a promising start. Not everyone can be healed. The lingering impression here is an overblown impressionistic sweep of a Big Idea instead of something truly courageous and evolving.
Posted by Djibril at 09:01