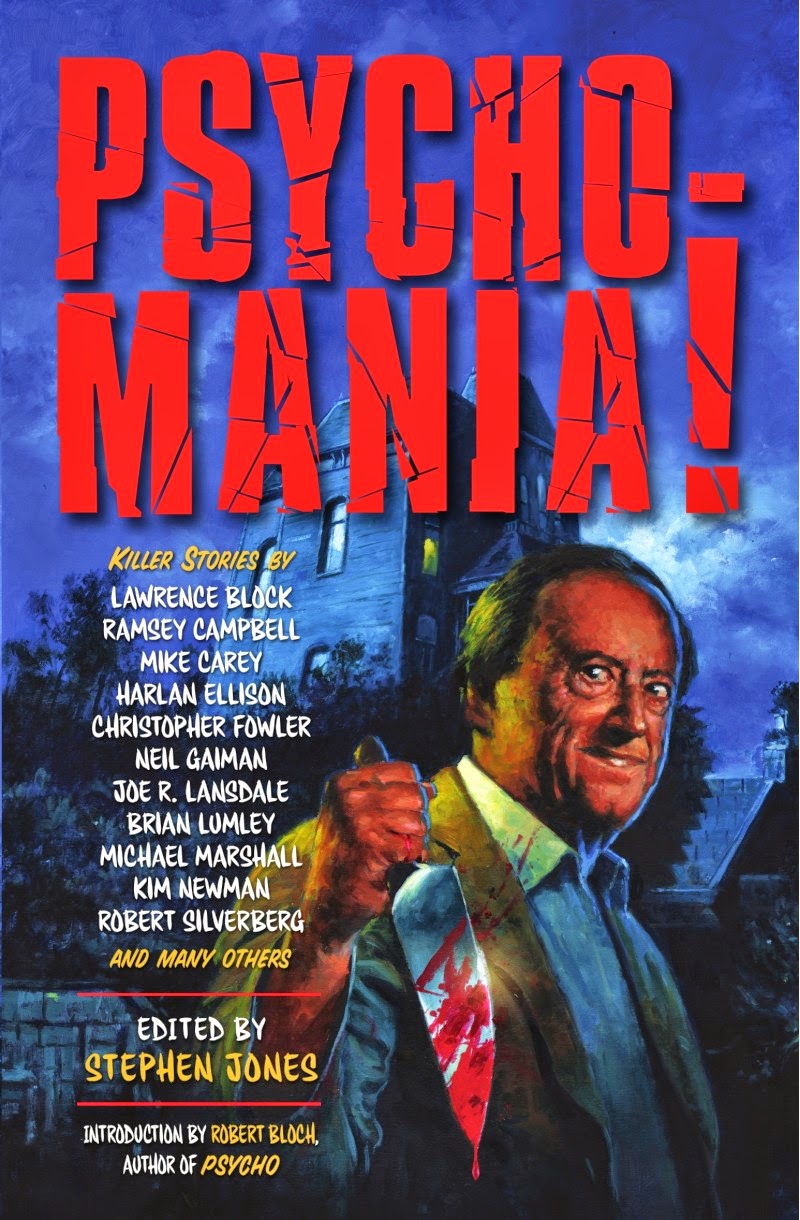 The shadow behind the shower curtain. The figure in the alley. The face behind the mask. The psycho, or homicidal maniac, has been a staple of horror ever since it awakened as a genre. From Norman Bates to Michael Myers and all of their ilk, the “psycho killer” has become one of horror’s most popular tropes. Add one of horror literature’s most celebrated editors and some of its most popular authors (including the original author of Psycho, Robert Bloch) to the mix, and it seems like a match made in heaven. So, does the book live up to the hype?

Let’s get one thing out of the way first: there is an inherent disrespect for those suffering from mental illness within these pages. This is particularly evident in the introduction, where Robert Bloch writes that “the problem with the real-life psychopath or sociopath, as well as with many outright dangerous sufferers from psychoses, is that they’re not always easily recognisable. They can—and all too frequently do—live just down the street, or even next door.” I don’t know when Bloch wrote this introduction (the copyright on it is 2013, but considering Bloch died in 1994 I doubt that can be taken as accurate), but safe to say that when he was writing the majority of his fiction, the state of mental health care and knowledge was not what it is today. For one thing, psychopathy/sociopathy (generally seen as the same disorder, though even that is a bit controversial) is a personality disorder, not a mental illness. A psychosis, on the other hand, is a very generalized term for particular symptoms of mental illness. These symptoms can be caused by anything from paranoid schizophrenia to OCD to post-traumatic stress disorder to depression, and are hardly an indication that a person is dangerous. The term ‘psycho’ in and of itself is often used as an abusive slur towards those living with mental illness, meaning the title of the anthology in and of itself is more than a little problematic. The cold hard fact is that a person suffering from mental illness is far more likely to be the victim of violence than the perpetrator, and those that are violent are more likely to harm themselves than others.

That said, however, one of the joys of anthologies such as this one is the variety of stories they offer. In this volume the term “psycho” ranges from the garden variety psychopath to narcissists, stalkers, addicts, schizophrenics, and others, some of which I’m honestly not sure how to classify. Some of the stories, such as David J. Schow’s ‘The Finger’, read to me like straight supernatural horror, and can only be read as falling under the “psycho” label via particular interpretations. Others, such as Paul McAuley’s ‘I Spy’ and Jay Russell’s ‘Hush…Hush, Sweet Shushie’ do a masterful job portraying both psychopathy and narcissism, to the point where reading the stories is an almost uncomfortable experience. On the other end of the spectrum, however, we have stories such as Joe R. Lansdale’s ‘I Tell You it’s Love’, which depicts a couple engaged in BDSM who proceed to take their fetish out of the bedroom and out on non-consenting partners. I wouldn’t be so critical of this story if Lansdale himself hadn’t spoken out against the BDSM lifestyle in one of his introductions (one for this very story, if my recollection is correct), stating that taking joy in causing pain is a sign of severe mental illness. This is a blow coming from one of my personal favourite authors, and makes this story an unpleasant read.

This is, somewhat unfortunately, a reprint anthology, so all of these stories have been previously published. I’ve had the pleasure of hearing Neil Gaiman’s skin-crawling ‘Feminine Endings’ read by the author himself, and this tale of obsession is just as eerie read as it is heard. Lovers of classic horror will recognize names such as Harlan Ellison, Edgar Allan Poe, and Richard Christian Matheson. I was in particular delighted to recognize one of my favourite tales from Peter Crowther, ‘Eater’, which I first had the pleasure of reading in the collection The Best of Cemetery Dance. However, that very story illustrates the other serious issue I have with the collection, and unfortunately, it ties in with one of my very favourite aspects of the anthology.

This collection is unusual in that the stories are not presented as individual, isolated tales; they are tied together by a “wrap-around” story. This is a device most often used in horror anthology movies, in which a background tale provides context for the rest of the movies. In this case, the wrap-around features a reporter who is trying to interview the director of a mental hospital. The director invites the reporter to page through some of their old files (a terrible breach of medical ethics, but whatever) and try to guess which stories are true and which are false. We encounter these characters in several “case conferences” sprinkled throughout the book, as well as a prologue and epilogue, all written by John Llewellyn Probert. It’s a unique and intriguing device, and encourages the reader to continue through the book. It also adds an element of veracity and credibility to the work as a whole, presenting each story as a case history or evidence from a crime, perhaps the testimonial of the killer or “psycho” in question rather than a work of fiction. It serves as a very interesting way of driving the overall story forward, but it’s in stories like Crowther’s ‘Eater’ that it begins to fall apart. Stories like ‘The Finger’ have a supernatural element, and indeed would likely read to me as supernatural horror if not for its inclusion here, but it could be interpreted as delusional rambling by the narrator. A bit of a stretch, to my mind, but still possible. However, ‘Eater’, while it undoubtedly features a ‘psycho’ in the form of Mr. Mellor, it is clear that he has supernatural abilities. One could easily say that this marks it as one of the fictional testimonials… which is exactly what the reporter states. But the director actually seems quite adamant that this is one of the true stories, even to the point of pointing out a continuation to the tale. Considering how the book ends, this could be a sign of the director’s unreliability, but it still left a rather bad taste in my mouth.

Beyond that, however, the book is an excellent collection of stories. One of the aspects of it that I enjoyed the most is the variety it presents, the way that it shows just how widely interpreted the theme of ‘psychos’ could be. From the sociopathy of ‘I Spy’ to the obsession of ‘Feminine Endings’ to the narcissism of ‘Hush…Hush, Sweet Shushie’ to the more familiar sexual killers of ‘Hot Eyes, Cold Eyes’ and ‘I Tell You it’s Love’ and ‘Essence’ (the last of which contains highly disturbing elements reminiscent of the real-life case of Fred and Rosemary West). But there are more as well. ‘Hush…Hush, Sweet Shushie’ and ‘Hollywood Hannah’ explore the effect of the toxic narcissist on others and the destruction left in their wake. ‘The Trembling Living Wire’ shows the all-too-often dismissed effect of the ‘psycho’ on his victim, a welcome change from many. ‘The Beach’ and ‘Feminine Endings’ have an ambiguity that allows the reader’s imagination free rein with the conclusion. And two of my favourites, ‘Kriss Kross Applesauce’, ‘Manners’ and ‘The Secret Laws of the Universe’ show the tragedy and misery that hide behind delusions.

This is an excellent collection overall. There are certainly some issues with regard to mental health and sexuality, but it is counterbalanced by the variety of the stories. While there is an element here of demonizing the mentally ill, there are also a surprising number of stories that lend agency to the victims, and even show the complexity and misery that lie within sick minds. It is not a perfect collection, but it is well-selected and contains a rich and complex variety, and overall I cheerfully add it to my collection of Stephen Jones’ anthologies.
Posted by Djibril at 19:20