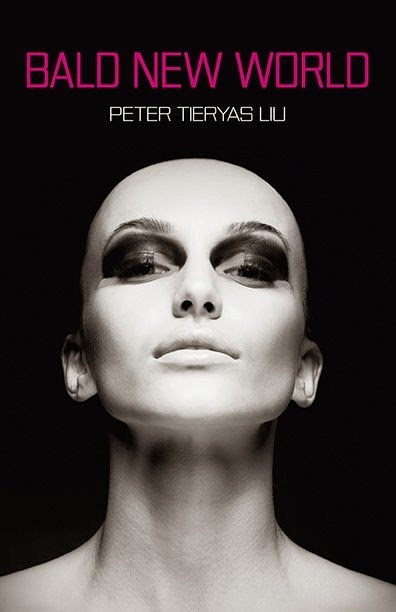 Opening this treasure of a book up, and you are dropped into a decidedly dystopian future, where an unknown global event leaves the entire human population without hair; not even lashes or eyebrows are spared. Overnight the world descends into confusion, recrimination, panic and violence; Liu’s vision is of a futuristic civilisation living on a thin knife-edge of sanity, now fallen into bleak selfishness and depravity. Our guide is Nick, a Chinese-American from a painfully, gods-awful childhood, who yet has grown up into a thoughtful and feeling narrator, hidden behind what could be construed as an instinctive frontage of unengaged existence. When wearing the best type of wig comes with an elevated sense of social position, the lack of hair, the rendering of the bald self, naked and exposed, has sent humanity scuttling to hide behind a million constructed images.

In common with many other dystopian tales, Liu’s story paints a colourful landscape of lurid extremes; religious extremism swings from puritanical technophobes living in the forest to an overblown, manically popular TV show featuring Christ as a chisel-chinned, Chuck Norris-esque, butt-kicking, terrorist-exploding hero. Celebrity culture is a matter of life or death in the future: fashions are killers, wars are filmed and digitally cleaned up (by Nick, among other such techies) for public consumption, California is now a domestic gang-war zone and body armour is compulsory if one wants to live while living there. Advertising has jumped from the football-pitch sized film billboards of Blade Runner to holographic display and subconscious programming plugged directly via into a person’s armoured helmet. Liu’s vision carries both the heavy parody of the skilled speculative writer, and the car-crash fascination of the excessive presented in readable format. It’s a heady mix and never once does Liu’s palette drop into a droopier, pastel shade, nor lose its absorbing attention to detail. Even in the close-up scenes between just a few characters in a room, you don’t forget the throbbing overheated life going on behind the pages to either side.

But perhaps the oomph-factor of Liu’s work—and it packs a mighty, yet, for all its vivacity, surprisingly subtle punch. The full impact is simply not completely felt until you realise it is gearing up the final slope to the finale, and that it has been a truly absorbing, roller-coaster of a job. One reviewer called Liu’s works books with ‘heart’. It’s true: the writing is both mindful, but effortlessly felt too. Liu stands in an enviable position of humane, yet intense authorial authority. He straddles both the themes of excessiveness and all the critique that one can feel could be heaped upon such by examples made, and he negotiates the developing of characters with the slow opening of lotus blooms. So easily could characters in an angry dystopian critique become mere ciphers, but you get a sense that Liu really cares for his creation, by the depths that it sounds down to. Layers strip away, piece by piece, following Nick’s past, present and into his future as he starts to unravel a world that left him so closed and pained. That frontage mentioned above? This is the awakening of Nick from the drone unit, scarred by life and closed away from further pain, into a realised individual. That’s powerful stuff, folks.

Screaming out from the pages is the fetishisation of the body, and thus we are presented with people through the body; its appearance and its needs. As a visual artist, Nick notices first how people look; their features and clothes and bodies before they even have much of a chance to open their mouths. Without hair, the world’s beauty industries have gone into overdrive, and Nick, as a child of the era, and a fashion photographer as well as previous official war correspondent, provides all tactile sense with data: sight, taste (food is heaped up into almost obscene mounds of mouth-watering detail), smell and colour. Sound features not so much; the future is hot on the visceral senses and sight as immediate paths into consciousness for advertising or social brainwashing via blasting media outlets. Sound, as perhaps a more sympathetic and intimate sense, gets less of a look-in; thus all description becomes removed, becomes the fetish of the humans living in this overbearing vision.

Alongside this is the amount to which the human body is invoked as a broken thing, held up, patched up and carried on beyond any type of happiness’s death. There is the male model who self-mutilates regularly, unable to cope with being a beautiful creature, and fearing he isn’t lovely enough. There is plastic surgery so complete that it can literally change a person’s face into someone else. There is the religious sect who believes in the purifying power of torturous pain, and the dribbling un-life of Nick’s brother-in-law: an obese American who self-indulgence led to a stroke and a mindless existence in an industrial-sized care home.

Yet Nick, a man with a broken childhood, a stuttering adulthood, more personal failures than successes (in his eyes), is also our hero. For despite his own overweight body and battered soul, his voice is one of integrity and of a quiet dignity. And of all the other surfeit of indulgences made by others in the story, Nick comes across as a man who has very little to indulge in. He is not a violent man, nor does he escape into sex. He comes close once or twice—but he shies away from it, unlike the nights of passion Larry reports. Nick’s pain over his marital failure has left him with an almost ascetic taste in a world where everything can go, and makes him into something of a knightly figure; a Fisher King moving through pain into clarity and peace.

To begin with, Nick is Larry’s wing-man, although given Larry’s sexual and material overindulgences, in hindsight Larry is more the earthy squire to Nick’s emerging knight. But when Larry is killed, Nick begins a descent—helplessly at first, but with increasing determination—into a murky world of beauty-industry politics. Through trials of purifying suffering as a captive of religious nutters, and then as a captive digital cricket fighter, which will batter his body but clarify his mind, Nick blossoms into a changing man. His final renunciation is of an enormous bequest and all things material (literally, even down to the clothes he stands up in), and thus he has nothing left to lose. By finally seeing that the one thing that dragged him through his traumatic youth and the bitterness of marital grief, the American Dream of ‘self improvement through self-effort’ is just a crock sold to stupefied drones to keep them happy with their lot, Nick’s is a heroic journey comparable to a grail quest. Somewhat to his own surprise, he will find that his grail is not simply learning to accommodate continued survival in the world as it is, but that one can change perception of it, thereby changing how one lives. By changing oneself through acceptance of past events and a refusal to take a side—for sides are the construct of the social trap—one can be, at last, freely self-aware.

All this revolves around the machinations of power: commercial power and the control of the largest wig-making business founded on a dark and violent secret of genetic slavery. But even more insidious is the power to make people believe—and in the future, it is all about the visual. Even the denouement and the final bombing of a globally-broadcast TV awards show and the evisceration of a famous actor live on-screen can be relabelled as a mere ‘publicity stunt’ by the broadcasting powers-that-be. Shocking events can be smoothed under the carpet; horrible wars are re-packaged as heroic blood-free adventures for the audiences back home, dulling every last feeling of shared humanity in programming-via-entertainment, while continuous advertising softens up the populace and impossible celebrity icons and stoked paranoia over dangers to oneself keep them self-absorbed and quiescent. This is not so far from what we have today: Liu’s story is a parable, the questionable elements rendered in hideous Technicolor to make it clear. The commentary on societal control, and where that power is exerted from, is yet profoundly and subtly done

Nick is taking back power into his own hands, but can only do so by being broken truly out of the system: by being removed from it by passing through his catharsis. Of course, this could be just another turn of the wheel: re-volution is only just that. Like the religious extremists in the forest, he could just be running away and hiding. He could be running in a Foucaultian ‘allowed discrepancy’. That there have to be some people who run naked through the rain in a Californian traffic jam, their nakedness a defiance to the paranoid and violent world around them. Because how else could they protest? Being without is the only way they can protest a society that is all about having; in a way, they are trapped in an inevitability as controlled as anything in such a society is. There is no clear answer to the wider backdrop of the tale, as it is the same cycle we find ourselves in today, but for Nick and his personal journey, there is a spark of hope for humanity.

Neon lit, vividly iridescent, yet never feeling heavier than a perfect slice of parfait, this book is one amazing balancing act between gritty drama, astonishing audacity, mesmerising supposition and tenderly observed characterisations. This book feels like a love poem to a very possible, yet ghastly future, with just a smidgeon of hope from a parent to an ugly, ugly child.
Posted by Djibril at 19:20