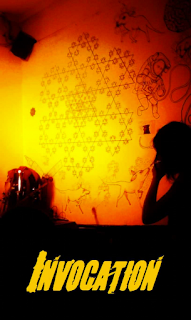 Invocation: a spoken or sung charm to concentrate focus and energies towards a desired alteration of state or change of direction; to draw something towards oneself. For such a highfalutin title, suggestive of mystique and quite possibly something occult, this little e-book (a slim 90 pages) is something of a narrative joke; if anything, it’s a little anticlimactic. Not to say I do not enjoy it—I did, a lot—but I was somewhat racking my brain to determine what the invocation in question was. I’m still trying to decide if the title was a clever or lazy choice; is this anticlimax of expectation a deliberate joke, or is the author trying to garner more ground for their story than it holds on its own?

Described as “urban fantasy set in the very near future” (from author’s page on Amazon), this is not a book of graphic description. It moves on the wheels of character reaction and point of view. This means that there is just enough solid detail mentioned to make it destabilising. Instead of far future—another country where they do things differently, to be explored from the protective bubble of omniscient readerhood—this is a recognisably current normality with added extras. My favourite sound bite being “the usual edgy news—a supermoon would soon grace the evening skies, Simon Cowell was now definitely dead, bees were attacking Indian paramilitaries.” Hurrah! The bees will come back in the future!

In this time and place (London) lives Myfanwy, a gloriously Celtic-named teenager, living with her single father. She attends, with best friend Kitty, a school that has a lot more bright high camp in its sixth form than mine ever did; the girls having ousted the boys from the common-room building, now called Womyn’s Castle, and running it on the lines of a ‘Transitional Gynocracy.’ The girls speak with a level of bantering wit I am sure most teens would be stumbling over. If there was any clearer indication of a speculative fictional environment, it would be this polished back and forth. It took a little time to get accustomed to the talk; a polyglot of youth-speak and recognisably English phrases that add to the sense of altered era and keep the reader nicely on their toes; a necessity, because barring a few flash-back moments, the pace zips along with all the enthusiasm of fan girls stampeding to the front of a Justin Beiber concert venue.

There is also a knowing playfulness about the girls’ speech; compared to the conversation (and by extension social skills) of a group of skateboarders, these girls are well on their way to hero-hood. The author, poking fun at the almost incomprehensible lingo of young adults in specialised groups, produces a comparison of cave-men street kids and sophisticated, educated young women. These are definitely middle-class heroines.

Myfanwy, apart from facing the challenges of growing up (a moving-apart from her best friend, exams, heavy colds and popularity stakes) is having odd dreams; italicised moments that for the most have their own short chapters. These are vivid flashes of subconscious detailing; dream worlds having their own logic, there’s a geography in there, but surrounded by odd images and weirder sensations. Strange things are also happening to her waking life. She discovers a strangely fascinating young man within the sanctity of the Womyn’s Castle, who makes a couple of non-sequitur comments about her then disappears. A spectacular woman in a posh set of wheels arrives at her school, suggests Myfanwy is a part of something bigger, leaves a mysterious calling card and drives away. Later, Myfanwy is on the Embankment when she and Kitty witness what appears to be the murder of the same woman by the young man, who then proceeds to get away scot-free.

Then the shape and places in Myfanwy’s dreams start to become familiar to her; possibly a half-remembrance of a period spent in Scotland as a small child. And off she and Kitty go to Edinburgh, in the wonderful way of young adults in such fictions; off to solve a mystery, without apparently any qualms over parental worry or, indeed, much to do with any formal systems of investigation (the Police have little part of this—well, of course not, it’s a quest). And there the story just cuts (this is book one). Having recognised (possibly) a small side-street, and on it a house that feels ‘right,’ Kitty knocks upon the door, it is opened, and—

It’s a mean trick, because of course that sort of ending will leave the reader frustrated enough to get the next one and read it, if only to satisfy a need for some sort of order. This entire first book is pure set-up: character, situation, geography of time and place. So it zips, it froths and it reads excitingly. As such, it’s not so much a mean trick as a damn sneaky bit of structuring. Full kudos to Walton for underhand craftiness on that one. And extra points for making a story and a main character that we come to enjoy. Myfanwy’s personality, as young as she is, is rather more redolent of a clever authorial mind working on her behalf than having a pure life of her own, but it is entirely forgivable, given how much fun the whole thing is.

Still none of that there invocating, though. Perhaps, perhaps this is a play on the theme of hopeful, youthful ‘invocation’: to be something special, something different; a superhero or a superbeing of some type. Naturally, fantastical fiction involving young adult characters will be placing them in the type of special scenario not encountered by 99.999999999% of the universe’s population, and so all such rarefied heroines and heroes are presented by default as the role models that fulfil the yearning for being special. It’s well hidden under a fair amount of adolescent grump, but the greater proportion of teens will consider, if not downright treasure, a wish to make their mark, to be a draw, a tipping point in an adventure of some description. The most obvious and mundane example being to become a get-known-quick ‘celebrity’ on a talent show or reality TV set up. Fantasy tales take such a dream and make it obvious; each fantasy is an invocation of secretly desired superior heroism.

Or, is this an ‘invocation’ of the author, drawing and disabusing reader expectancy? Are we to be drawn along with a set of expected tropes, then have them bundled out of the window? More thematically, the issues of dreams and the nature of reality are touched upon. Is this an invocation of the mind and its ability to destabilise and contrive? Is Myfanwy seeking a mental invocation from her fracturing sense of well-being: attempting to use her demanding night-time visuals as a basis for finding concrete answers? There is a tentative suggestion that one underlying theme is that of what shapes and forms our reality. A sleep-over scary tale, told in flashback, has a given ‘moral’ espoused by Kitty: that while things seem shitty, we should say ‘sod that’ and look instead for the best: the use of parable to invocate a lesson, a wish. The story she tells, however, features a well-worn cliché; the ‘twist’ ending when ‘it was all a dream/psychosis’ (Bobby is still in that shower after all these years). Reality is not, therefore, set (a confusing medley of possibilities and limitations discovered when the child becomes an adult and has to take on self-responsibility) but whatever it is, is malleable to those able to mould it; the ‘special’ set. Ostensibly, these could be the popular, cool kids at school. In terms of speculative fiction, it is the super-charged heroes. Reality is far more flexible to those with the minds to change it; with the ability to invocate…?

It won’t be until book two that a sense of what ‘invocation’ here means, as the girls stumble into a secret society, and some of the odder, unexplained events in this first volume remain queerly disproportionate.

That murder, for instance; in broad daylight, and in front of a bridge-load of witnesses. The ‘enigmatic’ man clocks the classy woman over the head with a heavy pole, and then drops her into the Thames. And then he gets clear away. Myfanwy is questioned by police, but that aspect is glossed over, in favour of the ongoing proto-quest she and Kitty have decided to follow. Most people would wonder what any of this had to do with them, watch with horror and revulsion, possibly become traumatised into a right old state of some description. Not these girls. But of course, if these two gave up, there would be no story.

Following straight on after these bloody events, the narrative plunges into a skateboard chase worthy of Tony Hawk. Myfanwy leaps into action; grabbing a board from a loafing skater and setting off after the suspect, despite there being no indication of her having any such skill previously. They plane and grind across the ridges and slopes of the Embankment, and narrowly avoid being mown down by a train. Translated to a screen, this would make for a thrilling chase; and no doubt the author had cinematic visuals clear in mind when writing it; it is a breathless and vivid rush of action.

Contrary to such a virtuoso display, at the book’s beginning, Myfanwy’s third-person ‘voice’ retraces the man’s exit from her school, giving a better description of how she fell flat on her behind in the snow when following him out of her common room. It’s an endearing detail: repeated with a sort of grudging honesty, as it makes her sound a complete idiot given the man’s suave grace. Myfanwy the Stumbling Student doesn’t quite cut it in comparison. Myfanwy Action Star is not that believable, either, but explanations will have to wait for the next part.

All in all, this is a frisking, frothy book. There is not much on Jo L Walton to find online. A Twitter feed suggests an interested individual, and a skinny profile on ‘Goodreads’ shows a strong interest in fantasy, magical-realism and classical fictions. This all makes perfect sense on the strengths of the narrative, and while it may dangle in places with unexplained detail, and bounce along with a language-based energy that sometimes feels a little alienating to someone no longer in the first blush of youth, it is perhaps because of these very factors that makes this a likable and highly entertaining read.

Even if the cliff-hanger ending is perhaps a cheap shot, it does do the job. I wanted to know what was next; pride and curiosity demanded it. Why the dreams? What the young man? How the murder? Why the lack of fear in the girls over a set of very odd circumstances? Why, indeed, the lack of parental interest or control over teenagers ranging about the countryside? Where the heck have they ended up, and what the bleeding heck is going on?

I have hopes for the series; that it can retain its snappy, slightly sarcastic style and cool-speak. That it will not degenerate into a ‘special girls fight evil with special powers.’ The place where so many have gone before; the slide into a pastiche of actual empowerment, where the heroine is some over-embossed and impossibly skilled-beautiful-youthful personage kicking arse in a supernatural fashion, and bearing absolutely no relation to any true life experiences faced by the hopeful masses every day.