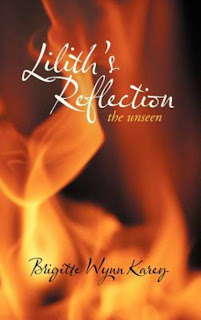 Lilith's Reflection: The Unseen, self-published through the pay-to-publish Trafford Publishing by Brigitte Wynn Karey, author of two previous novels (including Lilith [2008], to which this is sequel), is a re-telling of the contentious story of Lilith, one of the fallen angels. While this is a promising backdrop for a story examining human relationships and the possibility of forgiveness, it falls badly short of its potential because of some deeply implausible plotting, and the terrible state of the writing.

The figure or concept of Lilith is a very old one, occurring as early as Mesopotamian incantations from 2500-1500 B.C. to The Alphabet of Ben Sira, an anonymous, satirical, medieval text from the 8th-10th centuries A.D. Lilith was the first created wife of Adam who defied him and God by refusing to lie under Adam, deeming herself to be his equal.

Ms Karey’s attempt to adapt the story of Adam’s first wife, into a contemporary setting offers many interesting possibilities to comment on the varied nature of love in our modern world. Sadly, it falls short of its potential because of numerable grammatical and stylistic errors and consistently implausible dialogue.

We first meet Lilith strolling in the grounds of a mental hospital on the day of her release after waking up from a twenty-year coma, caused by her attempted suicide. She had thrown herself from the roof of her mental hospital while pregnant and miraculously survived although with substantial selective amnesia. We are asked to believe that despite a catalogue of murders before her suicide attempt, that included plunging her husband, the father of her unborn children, into an irreversible state of waking death and this long professional hiatus and she will be almost immediately re-certified as competent to practice psychotherapy and run her own clinic.

Immediately she departs for London where, sitting in Hyde Park, she meets 20 year old Dr Wesley Zeas, newly graduating doctor and is nonplussed that he is not horrified, surprised or interested after being shown her real face. In the next chapter, Dr Wes has arrived in California to take up a position as her resident. Over the next few chapters they argue and bicker their way into a relationship, killing off a few patients and other impediments to their union in the process. We also meet Justin, who is revealed as the son she was carrying when she attempted to fly and her husband CK, who although comatose is able to meet and talk with Lilith during her innumerable walks on the beach.

The book raises some interesting questions about the nature of human or inhuman love while also attempting to make a case for incest. Ms Karey also makes several references to the question of whether God can or will forgive sinners and if so under what conditions.

However, Lilith’s Reflection is so badly written that after clocking six errors on page one alone, I realised that reading and finishing it would require an act of super-human discipline. I couldn’t even complain as I had insisted on selecting it against advice from my editor. However, I am a Finn—not a quitter. We Finns have an almost untranslatable word, sisu. It means a kind of crazy, stupid, sometimes dogged courage that will not let them shirk a fight. I would draw on my full reserves of Finnish sisu to complete this challenge. Accordingly I set myself the task of reading three chapters a day—no more, no less.

So what is so bad about this book, I hear you ask. First of all—and remember, I am an English teacher, as well as an editor and writer—the grammar is so bad, it reads like it was written by a drop-out from a very second rate high school. I feel sorry for whomever was this young woman’s English teacher. It’s not a question of a few grammar and style errors; this book is one continuous style and grammar error. I offer the passages below as examples:


The Zeas family has been very successful in wine business from generation to generation. Ashley and Alex Zeas travelled most of the time, not only for business, but also for pleasure. The only time they could sit together and talked as a family was perhaps during holiday’s seasons.


Without saying another word, Lilith nodded her head and giggled with guilt. Wesley observed her as he felt rejected by her. However, Lilith had caught his feeling on time.

To be charitable, maybe English is not the author’s first language. This being the case why could she not have secured the services of a reasonable text editor to at least correct the grammatical errors?

The book proceeds to present the reader with a plot so improbable and disorganised that the achieving the required suspension of disbelief becomes impossible. Dialogue is so stilted and abrupt, it reads as stream of consciousness—not conversation between two or three people. The POV changes two or three times within the same paragraph.

So what—why does this matter? People who read a lot and buy books to read are generally people who love words and language. I don’t expect everything I read to be on the same level linguistically as Henry James or Jane Austin or George R.R. Martin, but when the language is this disjointed and confusing it becomes impossible to lean back and get into the story. I read for pleasure. Even the books I read to review, I open the covers and hope to be delighted. Here it was simply impossible.

Which brings me to another frustration: this young woman works hard. This is the second novel in a series about Lilith that she has written and produced. It’s no joke. It takes a lot of hard graft to write two 300-page novels. Despite its flaws there are a number of challenging ideas presented and difficult moral questions raised. I would like to see—and as a teacher I would say this—Ms Karey enrol in an adult education course to study and perfect basic English grammar, and to follow this with a seminar in novel writing. Specifically she needs to learn to write dialogue that reads as if real people might have spoken it. Additionally, an improvement in her use of verb tenses and agreement of subject with those tenses would make it possible for the reader to concentrate on the plot of the book and the activities of the characters, making her more willing to engage with the issues being raised

It would be tragic if a person with this much dedication and determination to what are interesting and challenging ideas were to fail because she lacked the tools to accomplish her goals.

Martha,
I really appreciate your honesty and bluntness. Have you ever written a good book?
It's much easier to criticize others' work than actually do the work yourself.
Your criticism of my grammatical errors is irrelevant to the theme of this book. You don't even get the synopsis, not to mention the real meaning of the story.
Your criticism of my work is rude and disrespectful. Do you feel better by dwelling on a writer's mistakes? So what if you are/were an English teacher. I am not attending an English class and you are not my teacher.

Your job is to review the overall work of this book and not to try to humiliate the author. No one wants to know that you are an English teacher or a Finnish sisu. You are such a snob and the way you critize the book is inappropriate and harsh. During your career, I am sure that you have received so many rejections and humiliations that you just have to take it out on these young writers. How pathetic of you!