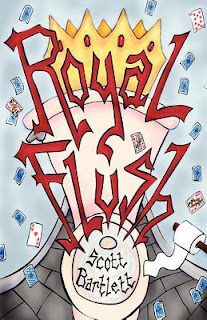 A Royal Flush is a hand of cards in poker of an Ace, a King, Queen, Jack and a ten all of a suit. It’s the highest set, the dog’s particulars, the absolute best. And it’s the name of the short novella by Scott Bartlett. Which is four chapters long, each based around a different suit, and which, in the final reading, is not, unfortunately, the absolute best. Poker is a game of bluff, chance, scheming and calculation. Arguably authors play similar games with their readers; they bluff us into suspending disbelief, draw us along with narrative scheming, calculate their target audience reaction, and we take a chance on them by deciding to read their work. By comparison, Royal Flush is in-your-face, abrasive, often irrational and unstable.

There’s no subtly here; no feinting with device and denouement. Bartlett presents a fictional kingdom—ostensibly circa Renaissance/ late Medieval period, but with latter-day details (a tabloid paper, a guild of linguists, counselling services)—settled in the bottom of a valley, ruled by the King. That is the entire name he has: rank and name have become one and the same. It becomes a bit of a running gag; when asked for his name, the King cannot even remember it. This is a King who came to power after the last one was deposed by the populace for being very unpopular. The four chapters in the life of the King follow disastrous excursions into romance, a siege, in exile as a brigand, and a triumphant return and reinstatement as King, followed by a small epiphany and a step down from the throne to become a husband to a warrior tribal queen.

In the normal course of things, comedy fantasy-fiction would contain some sort of moral; the comedy is most often used to satire something undesirable or downright ridiculous, the hero being the character who can overcome it somehow. It is not too much to expect a climax to events, for the plot to draw out threads of action and see some character development as a result. The King is a surly, boorish idiot. And while he may gain a little perspective on his travels and through his unlikely tribulations, he effectively remains a surly, boorish idiot. Like the PM said (nearly), this King is not for turning. Reflectively, it could be said that most of us are the same. We may pick up bits and pieces of experience that change elements of us, but intrinsically people remain mostly the same at their core. Changing a person so fundamentally that their very essence of self is altered constitutes a massive shift in personality. And such profound change of personality is often classified as a schism of mental illness. Yet within stories we take it for granted that the characters will learn something. There is comeuppance due, lessons to be ‘taken on board’—and then acted upon. And if characters fundamentally change, we accept that, even come to expect it. Some kudos to Bartlett for not following that route. Change, if any can be found, is in the short epilogue; nine years after the King steps down to become Mud once more (his bandit name), and thus an ordinary man, we find him once more face-down in a muddy street, needing someone else to pull him out of his mess. However, privy as we are to this thoughts, we learn that, all in all, he does not mind being ordinary. In fact he comes across as more pathetic than he has at any point before; more passive to his fate and quietly awaiting his wife’s return to a childless house, where he notices a cracked board he will have to mend.

This is no atonement; this is more of an inevitability in a lifetime of mucking it up. The King is victim to his own inept handling of just about every situation. He’s the butt of insolence he cannot stamp down on; for example, riding a goat because all the royal horses are mysteriously and permanently ‘out of commission.’ There is something very Monty Python about his bandit persona: the Mud the Marauder (the name chosen because he fell in a puddle of it, although there is something touching about a man embracing the fact that his name is now mud…) with the Fearsome Chunk of Wood; an improvised club that merits capital letters, no less. But the King is not a comfortable, likable character. He’s no rogue in the rough who can be polished up. He sulks about his castle, fills his dungeons with people he simply doesn’t like, orders regular executions, and knowingly seduces a tribal leader, even though it will mean the death of her people, as well as allowing himself to be seduced by the girlfriend of his bard. He falls in and out of adventures with not one shred of planning. As a King he’s rubbish. And he knows it, worsening his temper.

The main protagonist and the thrust of his adventures are set up like a series of set-piece gags. The first tale I found the hardest to assimilate—a problem, being the first in the book and the maker-or-breaker of the enterprise. Taking the idea of de-construction to a logical conclusion, it is a series of vignettes, dated by time (3 hours ago, 2 weeks ago, an hour later, etc). Written with a strong sense of the visual, this first story attempts to present a zippy, highly filmic series of non-sequiteur events, starting forward, then peeling back to show the King as a dreadful date and a worse suitor. However, it just became tiring and a little boring. Here, style was definitely over substance.

It is not until chapter two, with the story focused around a siege on the castle, and the cast list rarefied to the King, the bard Frederick and the bard’s girlfriend, Eliza, that something more narratively consistent emerges. The rest of the castle is empty, the King having given everyone the day off just when an invading army, disappointed with not managing to invade their intended target, decide to make up for it by besieging the King in his castle instead. Constrained by necessity for some geographical and temporal coherency within the walls of the castle, chapter two works considerably better. The personal relationships of those left in the castle take up the bulk of the story, and the introduction of a character just as title-bound as the King—the Wisest Man Alive—and his novel idea for raising an army in an empty castle give the story a narrative framework which chapter one was missing.

Into chapter three, and the King finds he is being gradually usurped by the pushy King Cedric of the Northern Realm. Instead of realising this, and following what could be a hero-making plot thread, the King remains fixated on his own petty concerns; namely by trying to impress a pretty, but work-obsessed girl in a group of travelling linguists. This group, a strong possibility for satire on academic and professional institutions, is amusing enough (the leader wants to exterminate a whole tribe just because their language ruins his Unified Theory, and there is a very Python-esque ‘display of linguistics’ by a set of captive peasants), but there is a feeling of a potential lost. The problem is mainly one of dilution. With the reintroduction of the King’s mother, the King’s (now undead) advisor, King Cedric’s machinations, the Wisest Man Alive exposed as the shock lover of Eliza (with some comment on therapist-client relationships, Eliza having been the WMA’s patient), it all begins to read messily, as if the author is not sure how to keep all his balls up in the air at once and is undecided on which to follow and which to safely drop for a while. So he tries to cover all bases, and it becomes scrappy. Chapter four returns the character roster primarily to the King and Frederick; ousted from the Kingdom, they become bandits by accident, picking up a gang of admirers and discovering the troublesome tribe of language-busters.

And it is in chapter four the King’s character finally begins to get a little development; possibly because there is a definite progressive thread for him to follow, as there had been in the siege chapter. One begins to suspect he actually takes note of events and that he might be putting two and two together. He might not always get four (his obtuse personality gets in the way), but the King has further to go in chapter four than previously. Taken outside his Kingdom, he has to learn to live on his own resources. Not that this is a chapter about some great undertaking, or about the strides made by self-realisation: the King character is not intended for that at all, but there will be some form of reward by the end; recognition of something having altered. The King will realise that he cannot just allow his love to die in a fit of pique, and later resigns his Kingship when he realises that it doesn’t mean anything to him. In fact, it probably never did. And when his love returns, it is with a very tremulous, slightly unfortunate agreement that they stick together: “they had both grown so used to being lonely they accidentally spent the rest of their lives in perpetual appreciation of one another.”

Nothing in the book is easy, nothing is especially kind, nothing works out perfectly; there are always pitfalls and no one is spared bad luck. Kingship weighs heavy on the King and on the Wisest Man Alive during his short reign. The press are arrogant and bolshy; academics are blinkered and mildly insane; love never runs smooth and people are basically mostly rude to and neglectful of each other. One overriding good does not unite and conquer all. We must remember: this is no hero-quest, and while the King shows small signs of alteration of some habits, he is still his own worst enemy!

This should make this an interesting book on the state of humanity; a commentary on how things often go wrong because of selfish decisions made, but with a little effort they can become at least bearable and even liveable again; the total then sweetened by Beckett’s self-proclaimed effort ‘to entertain.’ But it is the unbalanced structure of the writing that lets it down. If Beckett had chosen to make the chapters/sections/parts more coherent as a whole piece; having some element of progression stylistically and not just in content, there would still have been room for his jokes, one-liners and situational daftness, but with firmer ground to bed them in.

There is nothing wrong with having a lively style, or even trying to break the mould and attempt something different. But the danger of this is patchiness and incompleteness that almost feels like mild incompetence on the part of the author who chose this form for his work. Beckett did apparently write the story some time ago, then return years later to brush it off and edit it. The distance of time may have rendered a barrier to its completion. It is a shame that this book is not more carefully crafted, given its potential in picturesque settings, sarcastic peasants, anachronistic details, ridiculous dating techniques, sudden surprises and even, eventually, somewhat likeable and deeply imperfect character types. I did enjoy this, but I also felt strangely let down. Any social, political and emotional commentary that one senses in the writing, often the very point of comedy-fantasy as a showcase genre, is hidden by flung-away structuring and undisciplined plotting.