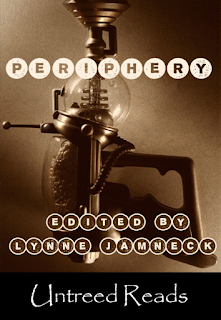 This is the e-book version, published by Untreed Reads, of Periphery, originally published in print four years ago by Lethe Press, and edited by Lynne Jamneck, a New Zealand-based writer. This anthology contains twelve stories, ranging in length from short to very short (although nothing is technically flash), with a wide range of science fictional and technophilic themes, all of which contain lesbian protagonists and a romantic or erotic flavour. Like the best of themed anthologies, this volume very much has a coherent feel to it; despite the wide variety of story types (and to some extent quality) this never becomes a random collection of stories, but rather there is a strong sense of the editor’s vision and influence throughout. At least half of the stories in Periphery are in the very-good-to-excellent category, and Jamneck has pulled in some wonderful talent for this project.

If there is a recurring theme for this anthology, it is perhaps that of the high-tech dystopia; in most cases not a world where it is illegal to be a queer woman, but a world where our daily freedoms are in some way severely restricted: a prison setting (for example in ‘The Voyage Out’, ‘Mind Games’, ‘Angels Alone’ and ‘Silver Skin’); a religious fundamentalist future (in ‘Ishtartu’, ‘Rocky Side of the Sky’ and ‘Sideways’); militarized culture (in ‘Diplomacy’ and ‘Silver Skin’); or just the old-fashioned runaway corporate nightmare (‘They Came From Next Door’, ‘Devulban Dreams’). Perhaps there is something especially titillating about escaping into forbidden sex or love in such a restricted environment? Of course the dystopia is not under-used in science fiction as a whole, so maybe so explanation is needed.

In a few stories there are signs of rough work or poor editing. Kristin Dunnion’s ‘They Came From Next Door’, a graphically and violently sexual story about diseased under-class terrorists fighting back against the privileged society that marginalizes them, is a fascinating piece but has some eccentric formatting decisions: the lack of line-breaks in dialogue makes it especially difficult to follow in places. One of the most inventive stories, ‘The Rocky Side of the Sky’ by Melissa Scott, feels sadly unfinished. A beautiful set-up introduces us to near-light speed spacers suffering achronia (a form of time-sickness involving experience and memory), and one woman whose conservative parents have edited her prosthetic memory to remove all traces of her lesbian partner; the description is bittersweet and beautiful, as her deleted lover struggles to win back the woman who doesn’t remember her at all. But the pay-off is almost immediate, and at seven pages this turns out to be one of the shortest stories in the anthology. As the master of queer cyberpunk, Scott is clearly capable of turning this into a story of twice the length with more tension, development and climax, and one wonders why she didn’t. The final story, Sharon Wachsler’s ‘Sideways’ is complete in and of itself, and is an excellent, polished piece about disability rights activists in a grim corporate/christian future USA where “environmental” euthanasia is encouraged by society; nevertheless its status as an extract of Wechsler’s unfinished novel Compostable shows, and the ending, while climactic, does not feel final.

Many of the stories herein are quite excellent, among them ‘The Voyage Out’ by Gwyneth Jones, which is set in a prison colony for society’s misfits. The story introduces us to the setting, a space station which is the launching point for an experimental, one-way journey to a distant, possible habitable planet for outcasts the world wants to be rid of, and to the budding relationship between a doctor, the assumed leader of the outcasts, and a dangerous, initially sedated, young girl. The romance in this story is charming, understated and heartbreaking; the science fiction is quiet, plausible and horrifying. This is a cautionary tale about intolerant society that flips the common fantasy about escaping to a frontier world on its head, making it a punishment instead of a survivalist’s dream. (I confess to being a little confused about the twist or reveal in this story, but the less I say about that the less stupid I’ll look when you read it—as you should!—and it makes perfect sense to you.)

Another stunningly inventive story is Tracy Shellito’s ‘Mind Games’, in which our protagonist Killian is a dangerous telepath, feared by the powers that be for her incredible abilities, and so imprisoned and horribly abused. But she is also too useful to them, so finds herself manipulated and used to solve crimes and “keep the country in line”, let out of prison only long enough to enter the heads of the worst abusers and criminals, to experience their crimes first hand and feel the lusts and urges that lead to their atrocities as if they were her own. Although she is watched and limited and controlled at all times, Killian’s powers are impressive, and she is not without a certain revenge. As excellent and convincing and horrifying as this story is, more fantasy than science fiction, there is a brilliant twist to the end that is as chilling as it is satisfying.

Yet another story with a powerful science fictional premise is ‘Angels Alone’ by Carolyn Ives Gilman, in which the protagonist is an anthroform, a genetically engineered blank slate ready to be imprinted with appearance, personality, pheromones and DNA when she comes into contact with her chosen subject. She is hired to win the trust of an apparently psychopathic scientist working (with very dubious ethics) on a prison colony who is keeping the secret of a great medical discovery to herself; by becoming like her target she intends to become able to influence her. Of course there are several twists to this story, and as the protagonist becomes more like the manipulative and unlikeable scientist a battle of sociopathic wills emerges, against the backdrop of the ruthless prison warden who hired her in the first place. This is a deeply unpleasant story, with several moments that literally make you shudder—it may also be one of the least convincingly erotic; but the science fiction is believable and creative. I’m sure I’ve come across Gilman’s name before, and if her other writing is as powerful and inventive as this story, I’m not at all surprised I’m remembering her.

Jean Stewart’s ‘Devulban Dreams’ is less impressive for its scientific inventiveness than for its elegant storytelling and subversion of social structures and reader expectations. Our protagonists are Hoyt, a tall, strong miner of Chinese origin, and Anne, blonde, blue-eyed innocent young girl, both on their way back to a distant, polluted, immigrant-fearing Earth from the mining world on which they have been stationed for several years (longer, in Hoyt’s case). Brought together at the spaceport by an old Chinese fortune-teller who promises them success and new beginnings, they find themselves drawn together as they board the ill-faded ship for the year-long voyage home. None of the characters is quite what she seems: Anne is not as innocent and helpless, Hoyt not as hard-boiled and single-minded, and the fortune-teller not as benign and quaint, but the dizzying twists that shake this story from side to side are never unsignalled, never feel cheap, and are at least charming and satisfying in their cliché. Info-dump aside, I enjoyed this piece a lot.

Perhaps my favourite piece in this entire collection, however, despite its brevity, is ‘Silver Skin’ by Elspeth Potter, a story in three short parts (two previously published as ‘Camera’ and ‘Wire’ in 2002 and ’04 respectively, and the third ‘Toy’ new to this volume) about two mecha-clad soldiers in an unknown and unexplained space war. The first part, told in an in-your-face second person, introduces us to Sergeant Flood, a veteran mecha-fighter who is called to interrogate a young prisoner captured in battle; the interrogation turns into a seduction, and doesn’t quite go according to plan. The second part shows us Commander Harrah Kassavetes, élite rebel operative, breaking into a prison planet to rescue (and fuck again) the sergeant who was prosecuted for letting her escape last time. The third section, written for this anthology, fills us in on what Kassavetes wants with Flood in the first place... Inventive and sexy and brutal and just sparing enough with language and detail to give us the essentials while leaving the backstory and world-building to our imaginations. This is how science fiction/erotica crossover should work: each contributing to the other rather than merely providing a colourful background to the “real” plotline. This story deserves to be read more widely than the audience of this collection (many of the stories do, to be fair).

There are a few pieces that I haven’t mentioned in this review; none of them are bad stories, but I had less to say about them (or in some cases I’m not sure I entirely understood them). I think the themes and shape of the anthology are well-represented in the sample I have discussed in depth; as many of the stories are about sex as love between women, and some are about neither, although some sexual encounter happens in almost all. Although many (but not all) stories are dystopian in flavour, most of the time the erotic content is a counterpoint to the terror; that is to say the stories are sex-positive, with characters finding love and/or taking solace from the repression of daily life, rather than being stories about sexual crimes, abuse, or dysfunction. (There are a few exceptions.) There are stories on the theme of winning freedom (or having freedom thrust upon you); of giving up liberty (or having it torn from you); of re-evaluating one’s life and the place of freedom, individuality and love within it. The editor’s strong hand is visible in the clarity and consistency of the rebellious, queer-friendly, technofuturistic content across this massive variety of messages. It’s wonderful to have this anthology available to read again.