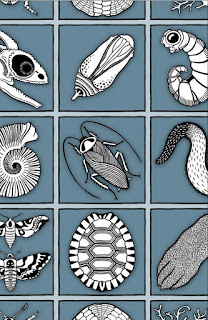 Rather unusually, the cover of Nick Jackson’s collection The Secret Life of the Panda bears no mention of either author or title. Instead, what we get is a grid, blue-grey, with its cells filled with sketches of natural objects; small animals, insects, shells and teeth, feathers and bones. It’s sparse, and unusual, and vaguely scientific.

The natural world, or the study of it, is a theme that runs through this collection of short stories. The first story, ‘Anton’s Discovery’, has a small boy conduct a gruesome examination upon a starling he has killed. In ‘Paper Wraps Rock’ another child feels an affinity for adders. ‘The Rabbit Keeper’ entwines a child’s crush on his babysitter with the fate of her pet rabbit. The young man in ‘Flaubert’s Poison’ works in a fish research laboratory. The oropendola plays a big role in ‘The Rope’, as does a curved shell in ‘Shell Fire’. ‘The City in Flames’ tells of a sixteenth century German scholar whose studies in the natural sciences are interrupted when his city is taken over by religious extremists. As the young couple in the title story negotiate (badly) their relationship, they watch a television documentary about the reproductive life of pandas.

About many of these stories there is something forensic. Creatures (including people) are physically dissected. There’s a dispassionate tone to much of the writing that contrasts sharply with the often very unpleasant nature of its content. Here, for example, is Jackson describing the rotting body of a dead snake:


The snakes weaved a restless path between the fronds of bracken. It took a minute or two to absorb the details of the scene: broken in three places, fixed with thick galvanised nails to a fence post, the corpse dangled, head down, limp like an oily rag. The prismatic brilliance of its belly washed to a pale ash grey.


For all that the stories in The Secret Life of the Panda are concerned with the living world, their characters frequently do not seem to wish to inhabit it. Again and again Jackson returns to a particular type of character; usually a young man, unable to interact with the world around him on its terms. “One morsel was enough. He could not bear to eat—he could not bear to be a part of the world”, thinks the protagonist of ‘The City in Flames’. Little Anton tunes out his father’s lectures, concentrating instead on the visual effects of watching a beetle through a lump of glass. In ‘Made of Glass’, the final story in the collection, Daniel similarly tunes out the world in contemplation of his own reflection. A number of the young male characters seem to manifest this in part through their complete inability to have healthy relationships with women. Heterosexual relationships are either shunned (‘Lady With an Ermine’) or entered into unwillingly and with vague distaste (‘Flaubert’s Poison’, ‘The City in Flames’).


Some shells, according to his uncle, possess an operculum—Vernon remembered the scientific precision of the word—with which they stop up the entrance to their refuge when danger threatens. The creature could then be inside, safe and enclosed. Nothing could enter in to disturb its inner peace. (‘Shell Fire’)


The remoteness of so many of these characters is almost certainly connected to their vulnerability, and it’s no accident that so many of Jackson’s protagonists are children. Some characters take refuge in the natural world to the point that they become part of it; Vernon, who was given a shell as a child, has carried it as a totem ever since. As an unemployed old man he attempts to build a shell-shaped structure of his own as a refuge. In ‘Paper Wraps Rock’ a child attempts to become a snake himself. On the verge of freedom himself, Kelvin in ‘Flaubert’s Poison’ undertakes to rescue all of the fish in the laboratory.

Yet there’s ruthlessness and destruction here too. Reading these stories, particularly those with the child protagonists, I was often reminded of Saki’s classic short story ‘Sredni Vashtar’. We have here the sympathetic child versus the adult world, but there is also a willingness to be cruel and to destroy. The violent children of Stephen’s (‘Paper Wraps Rock’) school, the narrator of ‘The Rabbit Keeper’ who is willing to commit murder, and Anton, the killer of starlings. At one moment we have characters turning to nature for refuge; at another, we have them taking up a scalpel. Sometimes these two things happen at the same time; Stephen (‘Paper Wraps Rock’) literally cuts himself open in his quest to become one of the snakes with which he identifies. Jan Knyp is coerced into dissecting a human body in order to prove the Godlike nature of the human heart. “For it’s a thing of great beauty, the human heart, is it not?” His audience may be less impressed when faced with the physical reality of the heart, but for Jan it’s “the truth … and truth has a kind of beauty.”

The Secret Life of the Panda is often rather stomach-churning with its matter-of-fact depictions of deeply unpleasant subjects. But this is, if anything, a testament to its effectiveness. It’s taut, strongly written and a bit nauseating, and it has “a kind of beauty” that lingers.