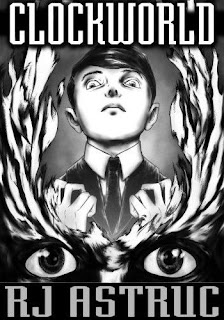 There aren’t a lot of things Josie Cooper wants from his father, but his presence and approval are two of them. His father disapproves of the boy he’s in love with, not because he’s a boy, but because he has ‘problems’... big problems. In Clockworld, Festival of Skeletons-author RJ Astruc introduces us to these two boys and some of their closest friends, and together we delve into a world where reality is twisted, and drugs and friendship are the only escapes from a world gone mad.

Galaxies away from Earth is a planet called Clockworld. Clockworld is mostly used for agricultural purposes, but there’s also a school there for children of Earth. The school is called Blackhall. The kids who attend range between the ages of 11 and 19, roughly post-elementary through college prep years. Most of the kids who attend Blackhall are the children of wealthy parents, or any parents who can afford it and don’t want to be bothered raising their own kids. In fact, they rarely even speak to their kids, being allowed only an hour of time to talk each month, and that one hour being rarely used up. The school and the agricultural settlements are isolated pod communities scattered across Clockworld’s only continent; in-between and everywhere else, the native flora of the planet grows wild and thick—and all of it can be used as some sort of drug or another. Whether inhaled raw, smoked, or eaten, the flora of Clockworld is a drug-dealer’s dream... and this is where people send their kids to school.

Being in such an isolated place does have its high points, though; the students of Blackhall spend all their time together, and get to know each other well. This creates a generally accepting environment for students of all sexual orientations, and it seems that each one is as common as any other there. Gay, bisexual, pansexual, heterosexual, confused... friends accept each other for who they are, because on Clockworld, your friends are your only lifeline to sanity, and everyone knows it. I mean, when your own parents have shipped you off to be raised by teachers and shrinks, who else do you have? But then, who do you have to turn to when you have a falling out with your friends, and teachers and shrinks are still just teachers and shrinks?

RJ Astruc has authored many novels and short stories, including one of my favorites, Harmonica & Gig. In Clockworld, a whole new voice emerges in the narrative; the voice of some unknown and uninvolved student telling the story of what happened to Jocelyn ‘Josie’ Cooper, Aubrey Partington-Hale, War Vladistov, and Xiaoping Hathaway. “What happened”... sounds ominous, doesn’t it? Well, it sort of is, in a Lord of the Flies or Stand by Me sort of way.

Clockworld is not a long book, by any means, but Astruc manages to squeeze in more social, moral and ethical points than I could have ever imagined. LGBT issues, nationality and race stereotyping, parenting issues, drug use and abuse, mental health, kids who need help and slip through the cracks with dire consequences; all of these are addressed—plainly, bluntly, with no illusions. The reader who comes to the story with no illusions, either, will see the reality of this fantastical story... how it takes what’s happening in our real world and gives it a good twist of exaggeration.

There’s not much to do on Clockworld but play sports, and drugs are everywhere. Without parents around to encourage hobbies and special interests and—gasp!—talk to their kids about life in general, most of the kids’ free time is spent getting high, making out, and talking about life. Yes, parents, even the jocks. Believe it or not, sports don’t keep your kids off drugs. Kids aren’t dumb: they recognize all the ways you try to keep them ‘busy’ while you’re off living your own life. It’s pretty normal for most kids to do a little dabbling, a little experimenting, but when they’re around drugs far more often than they’ve ever been around you, what do you think is going to win out? When they can’t talk to you about their problems, but drugs are there to help them forget them, which do you think they’ll turn to?

Clockworld is a good, fast read, not only touching on myriad social issues, but slapping the reader in the face with their consequences. I would recommend it to any mature reader who liked Lord of the Flies, Stand by Me, The Catcher in the Rye, or even The Grapes of Wrath. And if you, Reader, have kids... please take its lessons to heart. If you, Reader, are a kid, or young adult... don’t be afraid to demand the attention you deserve from your parents, or grandparents, or someone who’s been around the block and come through it okay. If you can’t go to your parents, that’s something only you can decide, but find someone. If you’re here, reading this, I have faith in you; faith in your desire and ability to do this. Because sometimes, the world feels like a lonely place, and fictional characters can be family, too, and books a healthier, more imaginative escape than any drug could ever be.