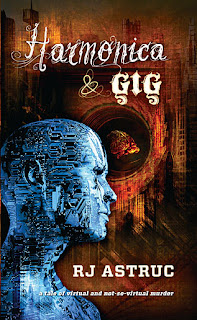 “Arnold Lee is found in a pool of his own blood with seventeen silver-steel knives sticking out of his body. Door unlocked, no signs of a struggle, naked except for a neurocap and bodysuit. Best case scenario the forensics can come up with is that Lee did it to himself. He’s sat there in his swank Wellington apartment and calmly inserted seventeen implements into his torso, one after the other, twisting them savagely now and then so the blood comes faster. Steak knives, bread knives, butter knives—he’s raided his kitchen for the tools. You’d think a man intent on committing suicide would find a more pleasant way to go.”

In RJ Astruc’s Harmonica & Gig, corporate matriarch Viger Singer seems to think so, too; but in a time when reality, virtual reality, and even altered reality are so intermingled that you can’t always tell them apart, nothing is ever what it seems.

When hacks Regina ‘Harmonica’ Carter, Felix ‘Gig’ McGuiggen and Lloyd ‘Talobos’ Hong are summoned to INTROMET headquarters on the premise of a job interview, all are taken aback to learn they are, in fact, being blackmailed into solving the mysterious death; but with the whole world watching and bodies piling up, it only becomes harder to tell who is really pulling the strings, and why.

Beyond the story itself, Harmonica & Gig is a cautionary tale. At its root are the dangers of openness on the internet, and the power wielded by massive corporations that quietly gather personal information without users’ consent. As the usefulness and importance of having an online life, and the number of news stories of information-gathering by companies such as Facebook, Google and various smartphone app developers increases, so too does the importance of the lessons in Harmonica & Gig. At one time, the internet was an anonymous place to while away the leisure hours, a form of escape, sans responsibility and accountability. Yet as more people discover the usefulness of the internet as a networking tool, our online and real lives become more and more intertwined, causing us to continually define and redefine our personas, our relationships, even our intentions... and in real life, we haven’t even started using neurochips or implantable brain computer interface devices... yet. Did you know those exist?

While the general public quietly goes about the business of living daily life, corporations quietly go about the business of recording it. While they do, they also quietly grow. And grow. And then, just for fun, they grow some more. This is how a capitalist world works. And while everyone is honest, it works well. The thing is, in a dog-eat-dog business world, how many people stay honest? As Harmonica’s son says he read on the internet, “Most CEOs of major companies demonstrate pathological behaviours in order to maintain their position and hold of the market.” It feels pretty good to be on top, so who wants to stand idly by and watch it all go away because someone else had a better idea, or a better marketing plan? What kind of information have you given to a psychopath today?

As Harmonica hacks into Viger Singer’s personal INTROMET area in the qverse, she is outright embarrassed by what she sees, and she wonders, “What was it about the qverse that made people so open? That made people so willing to wear their neurosis on their sleeves?” It’s a good question. For all the false security afforded by relative anonymity, we cannot help but seek out real connections with people, often saying and doing things we wouldn’t in face-to-face situations. These days, most people are using their real names for much of their online activity, but still we have that same feeling of anonymity. We’ve taken computer screens and digital code, and manufactured psychological shields out of them. But when’s the last time a good psychological shield protected you from a car accident? We feel safe, secure. That doesn’t mean we are.

Along with the lurking darkness of corporate greed and corruption, the author also uses Harmonica & Gig to question what effects mankind’s partnership with science have in more personal areas. “These impossible designer children resting uneasily in their designer genes...” Harmonica reflects, “It was a small wonder that Gig remained ignorant of just how good-looking he was. Then again, you often got that with test-tube kids—a psychological peculiarity Malachy Memphis termed ‘appearance apathy’. They’d look in the mirror and see not a person but a construction, a laboratory technician’s fusion of catalogue DNA.”

It is undeniable that infertility can be devastating for those people who want to have a family. To date, millions of ‘test tube babies’ have been born since 1978, with the help of in vitro fertilization. Harmonica & Gig takes a look at a rarely viewed side of this genre of scientific advancement with the character of Felix ‘Gig’ McGuiggen, asking questions like, “What effects will this have on the kids?” How can they be proud of who they are, when everything, from looks to behavioral tendencies, to intelligence, was purposefully spliced into their genetic code? The engineers could make an entire populace just like them, if they wanted, so where goes the pride in those things that make a person an individual?

Astruc is successful at conveying feeling and making her characters real. Every single person introduced quickly becomes a solid, defined individual, with a strong personality; even those whose own sense of self is so precarious. We feel we know them better than they know themselves, and that makes them truer still.

The writing in Harmonica & Gig is fluid and strong, never faltering. Astruc does a great job of foreshadowing, without making it obvious and spoiling the tension, suspense and mystery. All of this together makes the book feel more like a cohesive experience than a leisure-time diversion. I would recommend it to anyone. In fact, I’ve recommended it to people already. Why this book is not a best seller, or at least an instant cult classic, I do not know.

I LOVE how you make me want to read a book that I would have otherwise never considered. Very nice work.

Cyberpunk, one of my first loves. Have to give this one a read when I get a chance.

Also, you KNOW I'd already have my brain hardwired if somebody would just do the surgery.

And yes, Don, I know you would; you were the first to tell me of the technology some time back.