Reviewed by Giulia I. Sandelewski 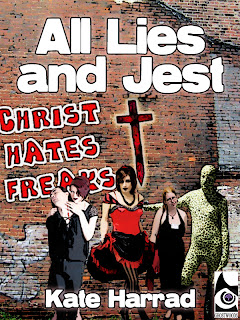 Elinor, the main character and narrative voice of Kate Harrad’s debut novel, finds her sleepy hometown strict and unforgiving. This oppression is symptomatic of fundamentalism on a much larger scale: the United States have recently reinvented themselves as the Christian United States, and the United Kingdom looks shortly set to go down the same theocratic route. It is in this anxious climate of unwelcome change that Elinor’s inner city girl flees to the capital, in the hope of meeting kindred spirits. Through Stefan—sound engineer, vegan, vampire—she finds more than she bargained for in the shape of many, intersecting underground worlds, all on the brink of extinction.

A documentary-feel is promoted by the inclusion of website excerpts ranging from Satanist identification to mushroom trip memories. While their location at the beginning of chapters is distracting, their very presence hones in on the liminal space between fact and fiction. Any temptation to marginalise the realities Harrad describes as implausible is dispelled in the face of actual experiences and perceptions. The line between research and invention sapiently blurred, we are invited to embrace the strangeness, and question common sense. This leads us to negotiate, on a case-to-case basis, how willing—if at all—we are to suspend our disbelief. From the outset, we may choose to side with Stefan in his vampiric conviction, or with Elinor in her conviction that Stefan is ‘clinically insane.’ We will grant fanatics who believe themselves weapons in the hands of God, so what about the vengeful Old Testament deity itself? There is a rich playfulness here which allows us to approach the text either as a Thomas Covenant-esque world of real (if disbelieved) magic, or else as a secular world in which peculiar subcultures are precisely that—subcultures.

In all likelihood, whether or not vampires—or God, or manifestations of the preternatural in general—are posited to exist is immaterial. What remains at all times tangible and pressing is the seemingly unstoppable spread of fanaticism, intolerance, persecution, misinformation, brainwashing, and absolutism, together amounting to a dismantlement of freedom of speech and belief, on both sides of the barricade. Perhaps to aid the making of this point, polarised perceptions become mutually exclusive by the end, a loss of relativity which puts the book in danger of being more mainstream in its alignment than it probably means to be.

This is not to say that the ‘mainstream’ is not acknowledged to be a problematic concept. Throughout, deviance is romanticised, a tendency which renders the quest for expression and approval incredibly delicate. Barring a few cases of opposites attracting, the people who define themselves as ‘different’ appropriate the (ab)normality discourse which originally alienated them, simultaneously defining everyone else as ‘odd,’ ‘weird,’ ‘freaks.’ Further, those on the fringes of society are revealed to be just as susceptible to discriminatory assumptions regarding heritage, class, and sexuality as the mainstream culture they stand against—yet may never take the place of, if they wish to retain their accolade of perversion.

Elinor reads as a bookish, non-conformist feminist struggling to reconcile credibility and fulfilment in a post-Mills & Boon, post-Twilight world. The self-confessedly un-heroic heroine is at once weary of the same old dramatic clichés, and irresistibly fascinated by them—because ‘silly’ as they may be, would life not gain in excitement and meaning if butterflies at first sight were real? The conflict between expectations and reality in relationships is handled with tongue-in-cheek humour, though the investigation seems restricted to heterosexual connections. In terms of plot advancement, the queerness of certain characters is key; yet queer identity itself feels oddly under-explored. While this does not detract from the overall success of All Lies and Jest, a more analytical queer slant would have seamlessly woven into the novel’s exclusion and acceptance dialectic.

Marianne, the switch who goes through lifestyles like fashionable totes, is immediately remindful of Buffy’s Cordelia, according to whom the illusion of friendship ‘beats being alone all by yourself.’ Through Marianne’s experience, the path to belonging—or rather, to the vanquishing of loneliness—is presented as strewn with obstacles, mistakes, and scars; a measure of manipulation at the hands of others is shown to be not only inevitable but, for some, a basic human need. Even more central are the nature, necessity, and prerogatives of the manipulation of others, in the context of a preoccupation with difficult choices, personal accountability, and the price of ideals.

It is difficult to pin down Harrad to a stable stance on any of the moral quandaries she raises. This seems to be intentional, and a logical extension of the fluidity of perception which characterises most of the novel. Perspective, omniscience, and objectivity are similarly blurred, a narrative choice leading to a final reveal which feels needlessly contrived. Less of a punch-line approach would have allowed greater psychological complexity, in turn leading to a more satisfying ending. As the novel stands, the discrepancies between what we are told and what we are not jar with the requests made of our emotional investment in the characters; a shame, as there is quite the depth, warmth, and humanity to invest in.

Bottom line: All Lies and Jest well suits the formally edgy, socially switched-on image young publishers Ghostwoods Books mean to project. Despite a style still in the process of defining and refining itself, Harrad awakens empathy and conscience in equal measure; her work should appeal to fans of subversive, other-centric speculative fiction in the vein of Clive Barker’s Cabal, and supporters of Ultraviolet’s commentary on political and theological extremism.