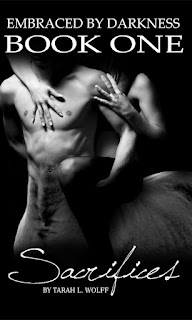 Four women strive to determine their destinies; to live with the choices they have made or that have been made for them. Sacrifices, a first novel from Tarah L. Wolff, deals with the struggles that women face to take control of their lives. The decisions they make will determine not only their own fate but the safety and future of their country. This is the first book of what is planned as an epic fantasy saga; the players are introduced and like the opening moves in a game of chess, at the end of this book they are all in place for the battles to come. With what seems like a cast of thousands and multiple intertwining plot lines, this is a very ambitious beginning for a new author.

We first encounter the Warlord Osondrous when, on a simple journey from her own Castle of the Wards to review her troops in a not so distant castle, she just barely survives an assassination attempt. After decades of peace, strange and unsettling events have begun to proliferate. Tempers flare that should not: Telenay, Osondrous’ human second in command strikes the an innocent woman. The King Ward is missing and now this attempt on the Warlord’s life makes it clear that the coming danger cannot be ignored.

This is a book full of strange and engaging characters, As well as Wards, Healers and Warlord—humans with powerful magical abilities—there are Centaurs, War Horses and Darkhalks, humans who have given away their personalities to serve the Castle of the Wards; and Implins, small creatures who exist to serve and be loved, much like useful pets. And this is only on the good guys’ side. While this could easily have descended into a kind of D&D-esque monster saga, Ms Wolff has succeeded in making the most of the major characters glow with authentic personalities.

This is no courtly Troubadour-inspired romantic fantasy. Life outside and inside the castle is dangerous and brutish. Unless a woman can claim a better reason for her presence, she exists to serve the soldiers of the castle in every way. They are waitresses, cooks and sexual gratifiers. The best they can hope for is that the soldier who claims them will be kind. Rape however is forbidden. Women who have risen to a more valued level (Warlord, Ward or Healer) are allowed and do initiate almost any kind of sexual licence.

For good or ill, the sexual mores of this unnamed country form the underpinnings of many of the decisions made by the protagonists. It is an area that the author has clearly given much thought to in her world building. This is why the absence of any hint of same-sex relationships seems to me to be a serious flaw. Despite the problems caused by various prohibitions on human / non-human intercourse, the possibility of LGBT contacts is never considered. Well known female authors of epic fantasy from Storm Constantine to Laurell K. Hamilton have been exploring these issues in their best-selling sex-pics for many years. There is no longer any justification for ignoring LGBT issues in a novel that has sexual relationships as one of its key themes.

The setting: to bring an end to the 500 year war between the Fae and the Draegoone, the ‘King’ Ward, Lionel created the Killing River, dividing the country into three sections. The Fae were sent to the West on the fringes of The Swoon, while the Draegoone occupied the East section along with a strange race known as the Vamepire. The humans and their supporters were given the middle section. The races are separated by a river so noxious and deadly that nothing can cross over or above. Only when a new King Ward is crowned does the power of the Killing River diminish enough for the Fae and Draegoone to cross and continue their deadly feuds.

After a long period of peace and stability in the central, human-ruled area, someone, possibly a mysterious Red Man, wants to use the next King Ward ascension to launch a war against the Castle of the Wards and its inhabitants. From the rape-seduction of Jezeline, which brings on her powers, to the murder of the unstable and ineffectual King Ward, Shankan, we only slowly become aware of the dangers posed by the Red Man. The structure of the book with the POV shifting from woman to woman in successive sections, works very effectively here. As each woman’s story unfolds from her perspective, there is little need to interrupt the forward motion with excessive info-dumping.

Four human women, lives intertwined, each have critical roles to play in the coming battle:

My favourite character in the book is Osondrous. Trained from childhood as a warrior, she has fought to achieve the highest military position in her country. She is the Warlord. Still young and inexperienced in the ways of managing people, when the King Ward is discovered dead, she must deal with strange almost supernatural pressure to have herself crowned. She does not know that on the day of a new King Ward’s ascension the Killing River diminishes enough for it to be crossed. For me Osondrous is the most interesting of the key women. In her struggle to master the people skills needed to do the job being forced on her, we see a fully realised human: bored, angry, loyal, passionate, imperfect but determined to do her best. Wilful and trained as a solder, her struggle to become worthy of the challenge she faces is monumental and engrossing.

Karaly, a young healer, deeply troubled by a forbidden love for her Darkhalk protector, does not consider what problems her actions will cause for colleagues in the Castle of the Wards. I find her the least likeable of the four women as she seems so wrapped up in her own emotional issues that I want to reach out and shake her. In many ways, the standard ‘wilful woman’ whose foolish actions advance the plot, her character is the least fully developed of the four.

In Jezeline, the author has created another complex and fully rounded character. Born and brought up on a horse breeding farm in a distant province, she had never imagined that her life would be anything different. On her sixteenth birthday, she encounters a powerful red-headed man who seduces her, bringing on the magical powers of a Ward. The insatiable sexual hunger created by the Red-headed Man sends her on a journey that will lead her to become the lover not only of the King of the Vamepire but also the heir apparent of the Draegoone.

Constance is a cipher. Her story seems to be an icon for the situation of women in this world. Attached to the castle as a servant, she hopes to one day be accepted as a trainee Ward. Just before her sixteenth birthday when she must choose her first lover, she is raped by a guard, Marcus and two friends. In a spectacularly gruesome scene, that provides still another picture of how brutal and violent this world is, Osondrous punishes the rapists with what are truly fates worse than death.

In Sacrifice, Ms Wolff has created an entire stage full of interesting and complex characters, many with their own unique identities. However another issue for me, is the universal whiteness of the characters. We get a vast array of human and non-human characters, centaurs, draegoone, vamepire, fae and so on but no indication that any of these has any skin colour but white. This seems retrogressive. Nowadays, people of colour now do make valuable contributions to many successful fantasy epics. After the success of books like The Hunger Games, their absence in a planned epic of this type is troubling. The story itself is compelling and believable and the writing moves along briskly. Despite the vast number of characters and a complex plot, the information is presented in such a vivid and clear fashion that I had no difficulty following the action.

A few weeks ago there was a Twitter discussion about women writers of epic fantasy. Among the issues raised was: why do men not want to read epic fantasy by women. I did some research on this topic and unearthed this discussion started by Katie Elliot, herself a fine writer of epic fantasy, Do females write epic fantasy differently than males do? If so, how and why? The question elicited over 200 passionate responses, but for our purposes Kari Sperring’s trenchant analysis seems the most useful:


“Oddly, I've been thinking about this, too. I think there's a perception of difference—there is an assumption that the women will be all emo and relationships and misunderstood witches, while the men deal with the Big Stuff—the swords but also the Important Politics. But the truth is that I think there's not that much real difference and that women in epic fantasy are writing some very interesting, important, subversive, political stuff and not being recognised because the assumption gets in the way.”

From the biographical material provided at the end of the book, it seems that the writing was in part an attempt to exorcise a number of traumatic personal events. If so, I say BRAVA! Far cheaper than a course of psychotherapy and far more useful.

Embraced by Darkness, Book Two, Stricken is due Christmas, 2012. As well looking forward to seeing how the characters’ lives develop, it will be interesting to see how the conflicts between the Fae, Draegoone and the Vamepire are resolved and what kind of King Ward Osondrous will become.