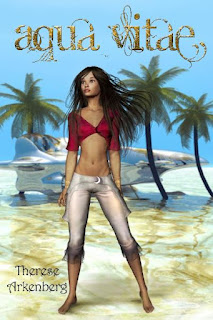 Aqua Vitae is a futuristic tale, set in the 26th century, about a woman seeking to become immortal. As the story opens, the protagonist, Jenes, receives a clue from a mysterious (and possibly mythical) Chinese man. Soon Jenes and several of her friends are haring off on an intergalactic pleasure-cruise to a tropical planet whose natives are allegedly immortal. The story is sparsely written, with little explanation given for certain crucial plot points, which was at first frustrating, but as I thought about it over the next few days, it began to grow on me. The sketchy nature of the background reflects the protagonist's personality: Jenes is so single-mindedly focused on her goal that she simply doesn't take notice of anyone else's experience. Still, the lack of detail on certain aspects of the plot can be confusing and distracting: for example, the question of whether the immortality treatment that Jenes undergoes is well-known or secret. The plot is vague on this point, at times maddeningly so.

And Jenes is not a likable character; I think this is deliberate. She is alcoholic, belligerent, rude, and completely self-absorbed. Inexplicably, she has friends, who for reasons at first difficult to understand choose to join her on the cruise. Also inexplicably, a handsome alien falls in love with Jenes, and she with him, leaving her with a difficult choice to make once she is immortal and he still isn't.

The central absurdity of Aqua Vitae is the idea that Jenes has set her sights on this goal, and pursued it (we are left to assume) fairly doggedly for some time—yet, until her goal has been achieved, she apparently has not spent any time at all thinking about such big questions as: why do I want this? what will my life be like afterward? and of course, what the heck will I do with myself once I have all the time in the world? That Jenes hasn't given these questions any thought at all is bizarre and incredible, and yet, it works—because the author has so effectively painted her as someone who always acts first and thinks later (if at all). The reader can easily sympathize with Jenes's friends in their frustration with her lack of forethought. Toward the end of the story, her one remaining friend confronts her with these questions, to no avail. Jenes needs to reach her lightbulb moment in her own time, and by the end she appears to have done so, although the ending, like much of the story itself, is somewhat vague and open to interpretation. Sadly, this does a disservice to the big topics of mortality and human nature that the author has opened up.

The story is marred by a few jarringly anachronistic details. It's bad enough that in the year 2542 there's no way for passengers on an interstellar cruise ship to contact each other without knowing each other's name and/or room number; technology being what it is, one would hope that a person should be able to simply ask the ship's computer itself for the name and contact info of a fellow passenger. (Something like “Ship, who’s that guy I was just talking to?”) That option being unavailable, Jenes resorts to writing a note for the alien she wants to contact—a note, written with actual pen on paper! Somehow that seems a bit hard to swallow. Worse, while our characters are on the tropical planet, Jenes gripes about tourists "wasting rolls of film" on pictures they'll never look at. Film? That reference is already archaic here in 2012.

I found myself a bit disappointed with the various romantic relationships portrayed in the story. Call me crazy, but I like to think that by the 26th century, human beings will be conducting their romances a bit less dysfunctionally than they do today. Of course, this may be primarily about the Jenes character in particular; as I said, she’s difficult to like, so it shouldn’t be surprising that the men in her life find her difficult as well. At the beginning of the story, Jenes describes the character Artemus as her boyfriend, but she certainly doesn’t treat him like a boyfriend; she spends most of the time trying to avoid him, except when she needs money. As for the alien man who falls for Jenes, it’s hard to understand what he sees in her, especially when she keeps pushing him away.

In the end, the story is interesting enough, but left me feeling unsatisfied. I’m of two minds about the novella form for this story. On the one hand, expanding it would have given the author an opportunity to explore more fully the characters and ideas she has created, and resolve some of those unclear plot points that I personally found so frustrating. On the other hand, the author’s lean prose style probably would not work well for this story in a full-length novel. Bottom line: an engaging and challenging read, with some food for thought if you have the patience to ferret it out.