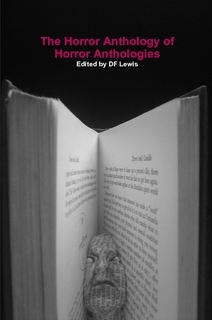 This anthology of twenty stories from the venerable Megazanthus Press boasts no forward, no author biographies, no promotional blurb or detailed explanation of the theme; no editorial hand has lovingly ordered the stories into a meaningful sequence so as to maximize the reader’s please, the stories are merely ordered alphabetically by author’s surname. This is all in accordance with editor DF Lewis’s “nemonymous” philosophy, namely letting the stories speak for themselves. The only common thread in this volume, as its title suggests, is that each horror story herein revolves around (or at least contains reference to) a fictional horror anthology. This leads to an eclectic collection of stories, some rather meta-fictional, some only loosely touching on the theme, which at times feels like it testifies more to the editor’s tastes than to a coherent thread, theme or message. That said, as any reader of the erstwhile Nemonymous series will know, the editor has excellent taste, and while the quality of the contents varies almost as widely as the subject matter, there are more excellent stories than there are duds between the covers of this book.

Several of the stories in this anthology are, as is only natural in a collection of horror stories about horror stories, fairly explicitly meta-fictional pieces, which is to say stories that say more about the writing process than about the ostensible subject matter. Of these, Colin Insole’s ‘The Apoplexy of Beelzebub’ is one of the finer pieces in the volume, telling the story of a public archivist in a depressing, creepy little town with more-vindictive-than-usual residents and more-vicious-even-than-usual children, and a penchant for anthologising the most unpleasant tales from their history, distant and recent. This tale is intriguing and disturbing in equal measure, filling the reader with disgust on behalf of the town, claustrophobia on behalf of the protagonist, and yet wonder on account of the horror-filled volumes in the town’s archives. As a piece of meta-fiction this is particularly effective; after all, what horror writer does not fancy herself a little bit an archivist?

Another very strong story that deconstructs the tropes of horror—in this case film—is ‘Common Myths and Misconceptions Regarding Rita Kendall’ by AJ Kirky; the eponymous Rita is an aging actress, best known for roles in schlock horror films and for her trademark blood-curdling scream. The once-famous Rita is being interviewed by an author for an anthology of stories inspired by classic horror, but her own story is complicated by memories of a twin sister whose life took a very different path from her own, but who is still psychically entangled with her every choice, every role, every scream. This story is a beautiful, and important, deconstruction of the sexy-victim trope in horror cinema, and as such is one of several stories in this collection that I would consider political (in all the right ways).

Also in the meta-fictional category are Dominy Clements’s ‘The Useless’, an atmospheric, creepy and effective borderline-surreal story about an inept lecturer and his impatient wife on a road-trip who get stranded in a village where the citizens are obsessed with reading from some mysterious and dangerous books; and ‘The Rediscovery of Death’ by Mike O’Driscoll, a very convincing (but slightly lacking in motivation or explanation) story of an independent horror editor unravelling—at heart this is an often irreverent but always affectionate homage to the small press, complete with references to real institutions and individuals.

Many stories, as is not uncommon in contemporary horror, deal with the topic of mental illness: what is more frightening to the reader in a relatively safe and prosperous life than losing one’s sanity, one’s grip on reality, or one’s ability to remember who one even is? The highlight of this category, and one of the lights of the anthology, is Mark Valentine’s ‘You Walk the Pages’, a story whose very language immediately suggests that the narrator is mentally ill, if not dangerously paranoid and borderline psychotic. As the protagonist fantasizes into the pages of his found-anthology ever more vivid acts of violence and horror against those who cross him or look at him funny, it becomes clear through the reader’s mounting discomfort that his message is in fact one of sanity and serenity. A truly profound and deeply moving story, and one which deserves to receive some real exposure.

Other stories of insanity include Colleen Anderson’s ‘It’s Only Words, which has an interesting set-up involving schizophrenic voices and unconventional violence, but an ending that doesn’t quite do justice to its topic; and ‘Residua’ by David Mathew, the tale of an (apparently) innocent prisoner questioning the nature of reality and his own mind. Two further stories in this vein involve the slow descent into dementia, a topic that is horrifying in its own right. Joel Lane’s ‘Midnight Flight’ is an understated but deeply moving piece exploring old age, memory and identity, as an aged reader tries to track down the editor of an out-of-print a horror anthology he read as a youth. The other, ‘Flowers of the Sea’ by Reggie Oliver is darker yet, a tooth-grittingly horrible depiction of senility against a vivid backdrop of painting and the squalid world of collectible antiques, including a mid-20th century almanac whose contents are more sinisterly real than expected.

Other stories examine our relationships with time, with aging, with events and experiences that affect us over a lifetime, along with our heritage (emotional rather than economic) from our parents. One excellent story in this vein is Rachel Kendall’s subtle and exquisite ‘Horror Stories for Boys’, the story of a man returning home to face his demons and his dying, hated father. This hideous story, again revolving around an almost-forgotten horror anthology from childhood, around illness and fear and self-punishment, is understated and stronger for it.

One of the stand-out stories in this entire volume is ‘The Pearl and the Boil’ by Rosanne Rabinowitz, another deeply moving story that takes place over several years, with childhood memory and the minor tragedies of growing up revolving around a vividly remembered but lost childhood book of horror stories, and a dreamlike early sexual encounter that may or may not have escaped from the pages of the book itself. This piece is also striking in that it has one of the most satisfying endings of a story of this type.

Other pieces that revolve around family or growing up include Tony Lovell’s ‘The Follower’, a story that takes places in a series of episodes throughout the protagonist Dorothy’s life, from sneakily reading a horror anthology as a child, to reading with her own child, and haltingly discussing the power of words, stories and the imagination with her son as a forgetful old woman; ‘All his Worldly Goods’ by D.P. Watt, a nice affecting story about bereavement and being left behind by modern life, with an ending that didn’t quite get there (but was probably the point); and Christopher Morris’s ‘The American Club’, an atmospheric piece about a young man finding his dying father’s unpublished fiction, with a nice build-up and a tense but understated ending.

There are a couple of classic horror stories in this anthology too: ‘The Fifth Corner’ by E. Michael Lewis, a tale of a magical horror manuscript hidden in a demonic car in a creepy museum, with glorious detail but a disappointingly sane climax; and Clayton Stealback’s ‘The Writer’, a familiar theme of a-writer-living-his-story that could have come from the pen of King or any of his imitators, well-written but not otherwise especially memorable.

A few stories leave the realm of gritty realist horror and flirt with surrealism or absurdist wild fantasy. ‘Tears of the Mutant Jesters’ by Rhys Hughes is a mildly amusing parody of horror writing, and a typically incisive, self-referential study of the surreal horror genre. Nick Jackson’s ‘Paper Cuts’, which begins with a pompous would-be writer badly cutting himself on a rose in mid-winter, and descends into a farcical attack on cliché and pretentiousness. ‘Horror Planet’ by S.D. Tullis is a story of studying in the library, courtship and alien invasion, written in a self-consciously irritating style and with no self-contained ending. (Strangely, sections of this story seem to be typeset in a different color—or rather shade of grey—but whether this is deliberate or an artifact of the otherwise invisible editing process was not clear.)

A piece that doesn’t fit into any of my (artificially) neat categories above, ‘Tree Ring Anthology’ by Daniel Ausema is without a doubt the stand-out story in The Horror Anthology of Horror Anthologies. Ausema not only takes the most liberties with the theme in this piece (the “anthology” is not a book, but a history reconstructed from dendroarchaeology, the growth-rings of a tree that has suffered unnatural horrors in a dystopian future), but it is also one of the cleverest and most original and inventive stories I have read in a long time.

Although I have attempted to categorise the stories in this volume for the purposes of this review, but I should reiterate the the editor has done no such thing, rather through the effectively random sequence and lack of introduction letter each story speak for itself. To take this as a lack of editorial oversight would be an error, however, since this is a carefully crafted anthology as memorable as any of the fictional anthologies in the stories within, and the influence of the inimitable D.F. Lewis is clearly recognizable. I would not be at all surprised if several stories in this volume were nominated or honorably mentioned in the year’s awards and anthologies.

Many thanks for your review,Djibril. And thanks especially for your kind words regarding my own contribution, The Pearl and the Boil.

An excellent review, Djibril. You gave credit where it was due.