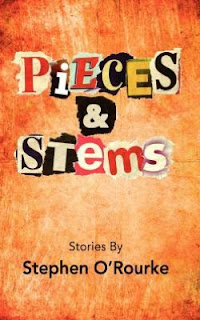 Over the last forty years, the postmodern trend in literature has upended long-standing notions about the basic assumptions of the writing process itself, such as the boundaries between author and reader, between reality and fantasy. In Pieces & Stems, Stephen O’Rourke explores these strange new worlds in a variety of ways, creating fascinating self-referential scenarios despite some severe technical deficiencies in his writing.

A surrealist author based in New York, O'Rourke has previously written four unpublished novels and a poetry collection. Now, in his first collection of short stories, O'Rourke makes extensive use of magical-realist situations and imagery to examine these conceptual issues to a far greater extent than many writers. Repeatedly, O'Rourke's characters find their worlds folding in on themselves, often swallowing their own tails like the famous Ourobouros.

An example is ‘The Cadaver and the Scholar’, in which an arrogant young student is writing a story by this title, in which a student much like himself is writing a similar story; the inner story is meant to illustrate some aspects of nihilistic philosophy. As the reader is led to expect, the outer story unfolds in much the same way as the inner story, but the ending provides a final twist that subverts the student’s argument. The student characters in both the inner and outer stories appear to be loosely based on O’Rourke, and so he appears to be using the act of writing as a device to examine these philosophical ideas just as his characters are.

In another piece, ‘Wrong Number’, the necessary distortion of reality involves time, rather than stories within stories. Here, the protagonist encounters a mysterious woman at the same time as he is bothered by a series of wrong-number phone calls; through a complex chain of events, he discovers that the caller is none other than himself, and that the woman plays a central role in the mystery. O’Rourke effectively conveys the character’s frustration as events become more complex and inexplicable.

In addition to these self-referential tales, there are several stories that provide a range of nicely surreal imagery. ‘Secret Sentient’ posits a tradition in which the bodies of the dead are preserved and displayed in their descendants’ homes, silently observing the flow of life around them; O’Rourke illustrates here the secret lives of the objects we carry with us. ‘A Bad Day for Bob’, one of the most successful stories, features a man convinced that his wife and neighbors are intelligent mannequins; this short, surprising story effectively describes a most unusual world. And the final tale, ‘The End Never Means THE END’, revisits all the characters of the other stories, along with a thinly disguised O’Rourke, and brings them together in a bizarre apotheosis that recalls Pirandello’s ‘Six Characters in Search of an Author’.

The ideas on display are engaging and intriguing, and O’Rourke shows much potential as a storyteller. Unfortunately, however, it must be said that his writing suffers from a number of flaws. For instance, O’Rourke often breaks the widely known rule of ‘show, don’t tell’; instead of presenting dialogue, he might describe what was said during a conversation, or he might end a story by telling what happened to the protagonist, taking the reader out of the story. Additionally, his tone is generally quite flat and descriptive, and this dispels any sense of empathy for his characters; they often feel more like experimental subjects. Given his postmodern approach, it is possible that this alienation is intentional, but this doesn't make the stories any easier to read.

Also, O’Rourke sometimes has little sense of when to end a paragraph and begin a new one. Many of his paragraphs stretch for a page or more and may combine plot, exposition, and descriptions of character interaction substituting for dialogue. Finally, the volume as a whole is badly in need of editing to weed out spelling and grammatical errors.

Whether these problems completely spoil the book will depend on the reader. There are fascinating ideas here about the interconnectedness of fantasy and reality, and about the ways in which art reflects the obsessions and prejudices of author and audience. O’Rourke also shows that he can create complex yet economical plots that delve into these connections. Given his distracting technical issues, some readers will likely feel that Stephen O’Rourke is not quite ready for prime time; but those willing to look beyond these flaws will discover an interesting mind just beginning to develop its powers.

[Editor's note: author's biography corrected in paragraph 2 above. We apologise for the error.]