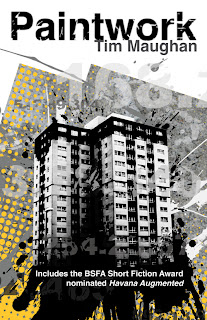 Paintwork is a self-published chapbook containing three fairly substantial cyberpunk-themed, near-future short stories by Bristol-based Tim Maughan. The production values are very high: the cover design, showing a grey tower-block on a digital background with splashes of paint, is professional looking; the content is very well proofread and copy-edited; the promotional campaign (as much as I’ve seen online and in social networking sites, at least) has been restrained and elegant. The only thing I missed in this volume was an acknowledgment that at least one of the stories herein was previously published elsewhere (‘Havana Augmented’, in M-Brane SF two years ago). The content is as glossy and professional as the packaging: well-written stories with beautifully handled computer game and VR settings and gritty urban themes. There is little to criticise in this little collection.

The first story, the titular ‘Paintwork’ is a tale of urban culture and street art in a very near future Bristol, a city whose geography and physicality are starkly embodied in the words on the page. 3Cube is a digital graffiti artist, a counter-cultural ninja who defaces QR codes on advertising hoardings so that viewers who activate them with their augmented reality ‘spex’ are treated to a sumptuous, animated, decaying cityscape instead of the Coca Cola cowgirl intended by the corporate owners of the billboards. But throughout his midnight raids on the animated street displays, his journeys through virtual nightclubs and all-too-real homeless dens, 3Cube is being stalked by another artist, an old-school peddler of 2-D monochrome images, defacing our hero’s graffiti as quickly as he can deface the commercials. There is a real tension to this piece, not so much because 3Cube is at risk of arrest because of the illegal nature of his work, but because of the atmosphere and the mystery, the implied danger on these streets with no honour among artists. The story ends with an anticlimax, a whimper rather than a bang, but it is somehow the most satisfying ending that one could have imagined, and in the spirit of the artistry and aesthetic of the story.

Following this is the slightly less atmospheric ‘Paparazzi’, another story which starts in the sharply visualized Bristol streets, in which John, a digital documentary film-maker, is on a rare trip outside of his cyberspace to meet a contact with an offer of much-needed paid work. Most of this story is set inside the game world, however, as John sets out to secretly record and publicly embarrass one of the most prestigious gamers in the world—a mission which, in this future of multinational (and multi-platform) gaming guilds carries real dangers. The reader is never as engaged with John as we were with 3Cube, however, and the relentless climax therefore lacks some of the impact of the first story, just as the game world—however gloriously detailed—lacks the physicality of the nocturnal city streets.

The final story, the longest and certainly the best, is ‘Havana Augmented’ (nominated—but not shortlisted—for a BSFA award in 2010). This piece combined the best of the hard, physical geography of the first with the intense and immersive virtual imagery of the second, as the flawlessly described streets of Havana, Cuba are populated with augmented reality mechs: larger-than-life humanoid fighting robots from the Rolling Steel AR computer game. This is a story in which the real-world repercussions of a computer game really matter, not just commercially but politically (although it’s the geeks playing the games we empathize with more than the politicians or activists), where street kids can take on (and maybe even beat) world-famous guild gamers, and where hacking is an art rather than a scam or a pastime. As well as watching the low-tech Cubans hold their own against the world, in this story we see them struggle with how to recover from the totalitarian socialism of the past without falling for glib commercialism of much of the rest of the world. A truly inspiring story.

The themes that recur in this volume include the importance of the street: not only as a space in which to travel from one venue to another, but as a place where people live (in some cases literally under road junctions). As a place where identity is situated and explored, where culture evolves organically, often orthogonally to mainstream and commercial trends; where language is coined and invented; where lives are broken and grow. These are very sensitive stories, bubbling with language and emotion and artistry, warped by the digital and the human. The one disappointment is the lack of interesting women characters in these stories: at least as many gamer geeks I know are female, but in this book the only named women are a nagging housemate, a honeytrap, and an ‘ice queen’ who throws a tantrum when she loses a game. Other than this the characterizations are strong, inclusive and believable.

As a collection, this 100-page book displays not only its author’s mastery of writing science fiction, his love of urban culture, electronic music and gaming, but also his keen intellect and ability to build a story that is both entertaining and edifying at a single stroke. Very impressive stuff, and we should all look out for more cyberpunk fiction by Tim Maughan.