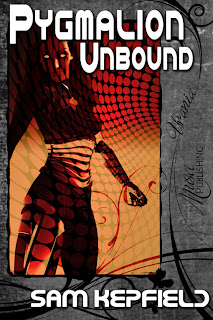 Before any review can continue on this one, the simply delectable title just begs to be unpacked. As a basis for a first impression, for anyone with half an eye to cross-textual referencing (which I would like to think an intelligent reader interested in this genre of story would be), it’s a doozy. To begin: Pygmalion. Both an ancient Greek myth about the creation of the perfect female form (literally, from ivory, which comes alive at the besotted sculptor’s prayer to Venus) and a popular musical about similar, but in true Edwardian style the ‘moulding’ is a social one; turning a working class girl into the facsimile of a high-end lady.

Then there is Prometheus Unbound; a lyrical play by Percy Shelly from 1830. It continues the ancient Greek tale of the sufferings of Prometheus; a Titan bound to a rock and tortured for eternity by Jupiter for the help and favour he showed towards humans, giving them, among other things, the secret of fire. In Shelley’s play, following the traditions of the romantic poets, Prometheus begins to feel pity for his tormentor, Jupiter, thus showing himself to be the better being. He is released from his torment and reunited with his lost love; there is redemption in the air. Added to this, one cannot escape the marital connection to Mary Shelley, the ‘mother’ of the classic monster story. On the side of the monster, Mary’s take was revolutionary for its time; suggesting that the ‘monster’ was the better being; ultimately meeting and forgiving his human maker; a feckless and hysterical character by comparison. She also put forward the idea of nurture over nature: the monster, despite coming from questionable beginnings, learns to be more human than those who would fear and loathe him, based on his physical appearance. Mary voiced the classic tension of ‘us’ and ‘them’ that haunts politics and speculative fiction.

Kepfield’s story ranges across all these themes; it is no coincidence he chose the snappy collision of ideas. The story is about creating a perfect female, lost love, the politics of human failings, and the created heroine rising above the pettishness of her creators. It suggests a better future of the human race; shown by a created super-human; a new fire of hope from this lovely Prometheus. And it places the dialectic of ‘us’ the ‘them’ in a very familial setting. Humans relating to not-human is the stage for a developmental tussle between the creator ‘father’ and the socialising, nurturing influence of the ‘mother’ psychologist. The loss of a love-of-his-life and of domestic bliss and the feminine influence softens the usual ‘bad guy’ role of the creator in this genre of sci-fi. The stern Dr Crane is the sculptor trying to recreate that loss. Having locked his sentiment away in his doomed relationship in the past, he seeks to be in control, to assert his masculine prerogative, at all times as a way of protecting his dreams. Unfortunately, he tries to control the fate of one that is effectively his ‘child’ in order to try to hold close the memory of his lost partner. This, as any family psychologist will tell you, is not a healthy outcome, and Maria’s escape is inevitable in such a stifling relationship.

And nicely sprinkled over all as a sweetener are just enough geek sci-fi references to make this reader smile; notably direct associations to the Terminator, Metropolis, and trashy 1980s sci-fi actioneers. Asimov’s and Clark’s stories have been held up as the forefathers of current rational thought in scientific development; long have sci-fi ‘geeks’ crowed over the fact that creative imaginations, writing stories, came up with the basic inspirations that a lot of modern technology now appears to mimic. One could say that such writers were in fact just good at reading the lines of eventual development, but it is cute to have a sci-fi story purporting to be all about the serious science make a nod to such themes and beginnings, right from chapter one!

Structurally, the tale runs a gamut from a slow introductory schema featuring densely-packed techno-babble details on the processes involved in the heroine’s creation, to a sense of urgency and ‘escape’, to related legalities (the author is a practising lawyer), to an action climax, featuring a savvy, slick fully-operational ass-kicking female Hollywood would be proud of.

Maria, a new being, is created from a metal skeleton, cloned tissue and nano technology; engineered to be faster, stronger, heaps more efficient and smarter than the average human but to pass as fully organic. To call a comparison to another iconic sci-fi figure, in common with the Fifth Element’s heroine, Leeloo, she is a super-soldier, a sponge for new information, a naif and innocent, soaking up moral and ethical behaviours from the humans around her. And like Leeloo she taps into the sad, long history of mankind’s failings, upon which she learns to break her programming, even Asimov’s Laws, to make her own, independent decisions. Given that hints as to the very personal origin of the DNA needed to create her tissues; from, we eventually learn, a person close to Dr Crane, her creator, it does feel as if Kepfield is making a stand about the triumph of the human spirit, in a story about technical supremacy. Endearingly, his ‘monster’, unlike Mary Shelley’s, carries a rather Victorian notion (still used in sci-fi and horror tales) that the spirit of a person now dead can somehow infect and direct the actions of another; the inheritor of their genetic blueprint. Under this all, and raised directly by the psychologist, Dr Kelly (brought in to bring out a coherent personality in Maria), is the question about the binding element of a being; that of the soul, and whether it can exist in a created being, not of woman born. The ghost in the machine. Maria’s determination to go her own way is Kepfield’s answer. The child grows up and takes her life into her own hands, guided by her own sense of self and right to be.

There is a strong undercurrent of religious thinking in the story, where faith is a supportive, ethical guiding source. Kelly takes comfort from her Catholic background, despite her free-thinking outlook, and encourages Maria to base her ethical and moral development on Christian ideals. It is a mark of Kepfield’s writing ability that this does not feel intrusive or strange. Instead, it is a neat flexibility that has the meeting of science and faith naturally melds in the mind of a semi-organic, artificially created form. If there is one weakness, it is that the characters seem remarkably emotionally calm on many levels; direct and to their points, they are not terribly conflicted. One might expect that Maria, an android programmed with technical informational data, learning about spiritual issues, might have issues grasping one and the other together. But in her the bridge between belief and science is somewhat effortlessly crossed. This is due to a revelation; a crisis moment, over her purpose (prototype) and what will happen next (semi-human ‘drones’ set to slave labour and to go to war; her ‘race’ in bondage; the most obvious ‘use’ of the eponymous ‘Other’), and leaps forward in development are often ascribed to crunch times (evolution as a series of leaps; adaptations to environment. Quiet complacency is seen in biological and social tracts as stultifying). However, given the nifty novella format of the story, too much soul-searching would bog down proceedings terribly. The wit of brevity in this instance can forgive this skipping-over of a lot of the ramifications of what is a pretty huge, social question.

Kepfield ascribes this breakthrough of rational-emotional maturity to deep-rooted genetic-level ‘memories’ from the woman Maria’s DNA came from, and as mentioned above, this is possibly one of the most far-fetched aspects of the story. The fact that this, among the rest, seems the most fantastic, speaks volumes about the authenticity of the style of writing. The story is, for the most part, very believable; set in a near-future where technology is different, but recognisable; and where human nature has undergone no profound changes, as a twenty-first century reader might reasonably expect. The ending, however, is a little too Hollywood; a big badda-boom is the ultimate deck-clearing plot-device. By this time Maria is on the run from her creators; defying their plans for her, she goes into deep cover, unfortunately discovered, and needs must make a final stand (in a mortal sense) to cover up her disappearance for good. Tapping into a well-known filmic gestalt so far as such heroines are concerned; the lean, smart, lovely warrior-woman is a far cry from the theoretical child at the start of the novella. Kepfield keeps it all moving along at a cracking rate.

The epilogue is the fulfilling of hope. Dr Franklin, a co-creator on the project, cherishes a higher purpose; a dream of making a better being to draw humans out of the new dark ages he sees approaching in an increasingly violent world (a shoe-in role for Morgan Freeman, if ever there was one, to give a filmic comparison), and indeed, here is the classical Greek, and non-religious Romantic poet’s, allusion to idea of a greater being’s concern and interest in the redemption of softer, more fragile beings; an ethical code learned from a Catholic psychologist. This new version of humanity, this potential ‘monster’ if humanity had its way with her, has a greater capacity to help mankind.

One of the biggest tropes that stories about robots often employ is the idea of segregation, of the difference between human and the non-human. Comparisons with known apartheid regimes based on race/ religion/ sexual preferences make such ‘discussions’ using the human/ non-human dichotomy direct forums for politicised comment by the author, adding gravitas. Adding to Kepfield’s proven credentials as a writer (solid prose, recognisable themes, and believable characters), depth is added by the continuance of the robot-human discussion. Interestingly, in such a technical story, he has chosen the question of soul. Kepfield stands on the side of soul being possible, but only due to a trace memory within genetics: a possession, of sorts, by a human spirit. This starts to create problems for Crane and his military backers as Maria develops her own identity and begins to want to same respect for her habeas corpus. In some respects, although direct allusion is made by Maria accessing information on, and Kelly and Franklin’s ideas on, the Holocaust and slavery, the biggest aspect of ‘us’ and ‘them’ this semi-robot stands for is the question over family; when to let go; can we make the beloved ‘them’ into a part of ‘us’? This is an unusual tack, and is a unique perspective into the question of difference: the inevitable gap between me (us) and you (them), which appears even upon our own hearths, before we progress into the world; hiding our own insecurities in the ‘big questions’ which are only big because it is a lot of people having the same insecurities and blaming it on others.

The basic premise of this story is instantly recognisable: man makes something amazing. The being rebels, and a struggle ensues during which it is proven that man has much to learn from his creation, which turns out to be pretty awesome in more ways than anticipated. Pygmalion Unbound is a solid, entertaining story that stands solidly on this archetype. It does incorporate a few neat, new visions of its own, which are welcome in an otherwise well-trod genre. It was an interesting and entertaining read: intelligent, competent, and fresh, and I would look out the author’s work again.