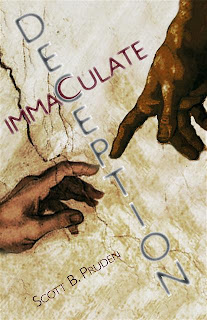 Immaculate Deception is the debut novel by Scott B. Pruden, a journalist and writer, and also the first novel published by “independent literary collective” Codorus Press. It follows the quests of two men, one dead and trying to become alive again by helping out a confused, all-powerful being, and the other trying to stay alive while learning who killed his father.

“Better off dead” has been going through my head a lot recently. This is not because I am suicidal, and I have also not decided to revisit my teenage phase of being excited by Bad Religion. The line first popped into my head after starting to read Immaculate Deception, and the more I was drawn into the book the more difficult I found it to forget about it.


“But until then: better off dead”

First of all there is the irony of the fate of Jon Templeton, the novel’s main protagonist. One day he finds himself dead, and escorted into heaven by the supreme being. However, instead of rejoicing that he has gone to a better place, Jon only wants to get back to Earth where he left his alcohol intoxicated body in a puddle of vomit after his wife dumped him and he had lost his job.

All is not well in heaven either though. The supreme being fears to be on the brink of losing control over the universe, and so it recruits Jon, a former investigative reporter, to uncover information on something it cannot comprehend. Jon will be sent back to Earth, but only for the duration of the mission—and that explicitly excludes getting in touch with his wife. So neither is the dead Jon Templeton actually better off dead, in Pruden’s novel he also has to face a conflict of interest with an increasingly moody supreme being that has fucked up at being omniscient.


“Better off dead, yeah better off dead,
A smile on the lips, and a hole in the head
And I’ll never make the same mistake
The next time I create the universe I’ll make sure you participate.”

So, what went wrong? And when and where? The story is set in the future, at an undefined date perhaps a couple of decades ahead in a somewhat dystopian South Carolina. Despite a range of new gadgets society still works mostly as we know it, but wars and the breakdown of state control in some areas have taken their toll, as have new social trends. One of the latter is going to play a key role in the novel, a new sect that is increasingly popular as it preaches getting close to god by focussing on enjoying sex as much as possible, especially during church service.

It is this sect that Jon Templeton is asked to infiltrate on a mission he hopes may give him a chance to not only save the universe, but, more importantly to him, save his marriage. He is, however, not the only reluctant hero in Immaculate Deception. There is also Mako Nikura, a surfer dude and unwilling heir to a global company who suddenly finds himself on the trail of a conspiracy that led to his father’s death. His part of the story involves a bizarre mixture of assassins, weapons smuggling, religious terrorists willing to kill night club visitors over their taste in music and a memory stick that eventually makes the paths of Jon and Mako cross at a critical juncture, with the fate of the human race at stake.


“And I’ll never make the same mistake
So if you’re looking for a patsy,
Why not try the entire human race
Just to play it safe?”

Both unlikely heroes are not alone on their quest. They are helped and hindered by an intriguing cast of characters involving armed cross-dressing night club owners, the devil’s minions, gay US Marines, sex-hungry beach beauties, Jesus Christ and the souls of the dead, including an angel-like former prostitute. There is sex, a lot of sex in fact; drugs, quite a few drugs; and perhaps a little less rock’n’roll. Also on offer are a good dosage of action involving breaking into high security buildings and fighting drones and beings from beyond the universe, plus a conspiracy with several surprising plot twists.

To sum up, it all sounds like total trash.


“Better off dead, yeah better than this,
Take it away ‘cause there’s nothing to miss
I’m sorry about the world,
How could I know you’d take it so bad?”

And yet I did not take it bad at all. In fact, it is probably the most enjoyable book I have reviewed in a long time. First of all I enjoy the intriguing concept of a supreme being that has to deal with something it cannot comprehend, sending a mere mortal (well, mere dead) on a mission that is indeed well suited for an investigative reporter. This brings me to the second reason that makes Immaculate Deception so enjoyable: a well constructed story. The introduction, for instance, may appear relatively long, but all the information planted into the reader’s brain is there for good reason. Some of the turns and twists may perhaps seem a little unlikely, but after all there are supernatural forces at work. As long as you accept that premise, the story works.

Pruden also creates a lot of suspense, especially by moving from one story line to the other at critical moments, and (excepting very few minor issues the editor should have tackled) the book reads well. On a few occasions Pruden comes close to doing too much—at first I cringed when Jesus Christ entered the scene, and some of the characters are living the cliché—but the balance is never lost. Only during the big showdown I was not 100% convinced that the timing in the action sequence worked at all moments—but this comes from a reviewer who has spent two decades working hard to ensure that events are properly synchronised in role playing games. The overall build-up of the story is excellent and I soon found myself hooked.

If you like a jolly romp involving supreme beings, conspiracies, a dosage of scifi and much action, and if the thought of an investigation dealing with a sex-focussed sect, a global weapon’s manufacturer and real estate do not put you off, then you will enjoy this. Dead or alive.


“A smile on the lips and a hole in my head,
better off dead, yeah better than this”

There are some big topics in there; sex, religion being two. I wanted to ask if the narrative attempts to 'deal' with these? I suppose I'm keen to find out if there's some Pullman-esque reason in there or if it's just enjoyable pulp-style fiction?

Thank you for your comment, Paul. Does the book have an element of pulp? Yes. Would the story work without sex and religion? No. It is difficult to say much more without going into too much detail on the book, but the focus to me is more on the story than on a philosophic reflection about life and religion as such. I would also say that the story as such is more original than the reflective part. The answer is probably that the book is somewhere in the middle between the two scenarios you describe.