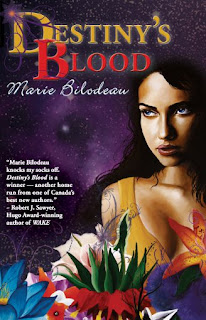 I was intrigued by the Dragon Moon Press blurb for Marie Bilodeau’s Destiny’s Blood: “To save the withering First Star, will Layela sacrifice her sister... or herself?” Being interested in both female familial relationships and the concept of ‘fate’ in fiction, I had a feeling I would enjoy this book. Happily the novel matched my expectations. At first I was disappointed by the cover art; although beautifully executed, the picture concerned me—I thought it looked like a romance novel. But I am delighted to report that there are no Harlequin novel clichés to be found within its pages!

This book is a highly enjoyable read—it’s compelling and well-written tale of Layela Delamores and her twin Yoma. Layela tries to outrun her difficult past and her nebulous sense of foreboding by moving to the remote planet of Collar to set up a flower shop with Yoma. But when her sister disappears, Layela is determined to find her. Accompanied by Yoma’s friend Josmere, a member of the Berganda ether race, she embarks on an expansive quest to find her sister. In the process she finds both her family’s legacy and her destiny.

The twins’ characters are polar opposites—Layela is sensible and forward-planning, while Yoma enjoys the hand-to-mouth existence of living on the run. Layela tries to build a steady life for herself and her sister but Yoma is not on board. It is a situation familiar to most families: Layela wants to impose what ‘she thinks is best’ on her sister but ultimately fails. I liked the way Bilodeau makes the relationship between the two sisters so easy to relate to; she doesn’t descend into sentimental clichés like some sci-fi writers do. This realist approach to the dynamic between the characters brings the fictional world they inhabit closer to the reader.

One of the twins is fated to save the First Star, but to do so one must die. The sisters embark on a ‘hero’s journey’ to realise the prophecy that is to be their legacy. This plot is well-realised and interesting, and has a different take on the usual quest scenario typical of this genre. The ending is beautifully resolved with a fitting climax.

This novel is feminist in that the female characters are strong and are fighting to shift the androcentric imbalance of power in their world. The concept of the ‘ether’ races struck me as the embodiment of Gaia, the divine feminine. Intuition, vision, nurturing and living in harmony with nature are characteristics of a race that are dying out, due to the ruling military regime. The ether realm is a proliferation of life force, while the military’s world is one of war and death.

The botanical descriptions in Destiny’s Blood are beautiful: Bilodeau creates entire genera of flora and fauna to create an immersive setting. The fine writing makes the fate of the Bergandas—a race of plant people—even more poignant as they are becoming extinct. Forced to wear gloves to limit their powers and forbidden from owning businesses on certain planets in the galaxy, the Berganda are being ethnically cleansed. It is the destiny of the Delamores sisters to try to prevent this from happening.

One criticism I had of this book—and this is certainly not specific to Destiny’s Blood, as it is almost a science fiction convention by now—is the linking of personality traits to races. For example: “For a Berganda, I’m actually quite positive” (33); “Mirialers were stubborn and loyal to their own” (147). I find this convention pigeonholes the races and makes them seem even more different. In an unequal world, this stereotyping separates the races even further. Bilodeau’s writing is so good that I feel she doesn’t need to rely on this outmoded trope to describe her characters.

Nonetheless, this story is well-crafted and often cinematic, at times reminding me of Firefly/Serenity or Star Wars: A New Hope. The story’s pace is fast, with many plot turns. This wouldn’t be the type of story I normally chose to read, as I prefer slower, Ursula K. Le Guin-type meditative narratives, however Bilodeau writes these numerous action scenes so well that I was more than happy to go along for the ride.

What is it about cover art for books with female main characters always looking like a romance novel? It turns away people who don't want to read romance novels, thereby losing readers who would really enjoy the book, and makes people who wouldn't enjoy the book feel tricked. Of course, this doesn't apply if the book is a romance, but I am talking about all of the books that are something else entirely, but they still get the romance novel cover. It drives me insane. If the publishers don't respect their female authors or customers, can't they just pretend that they do? I suspect it is mostly the customers they lack faith in, but it becomes a vicious circle. The wrong sort of people buy the books based on the covers, then the publishers can say that women only like romances (because the women that buy them, thinking they are romances, complain when they find that they are not). But they are missing all the people who can't tell what kind of book it really is!

Sorry, can you tell I feel strongly about this? I feel the same way about movie trailers, which often seem to be about entirely different movies than the ones they are advertising. It is just stupid marketing! Thanks for this review, the book looks very interesting!