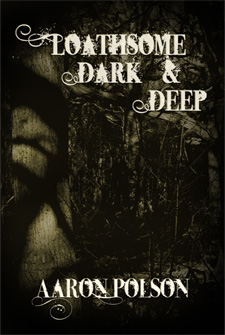 Henry Barlow fought in the Civil War. His wife met her end as the victim of a vicious murder. He hasn’t touched a pistol or a rifle since and has crawled deep into a bottle of bourbon and when we meet him is hiding out at the only brothel in Ecola, Oregon. There, he receives orders from his employer, H & P Lumber, who want him to travel up the Lewis River and investigate why their camp there has gone suddenly silent. With his colleague, the nervous and meek Otto Olson, and a small group of hired men, Henry makes his way up the river toward the silent lumber camp only to find a situation worse than anyone could have imagined.

Loathsome, Dark and Deep is Aaron Polson’s third book and second novel and his first published through Belfire Press, a small house established in 2009 and primarily interested in cross-genre titles. The cover evokes a feeling of being lost in the forest, the trees closing in, a feeling I am personally all too familiar with. Even readers who have not wandered aimlessly through an endless labyrinth of trees for hours on end searching for a way back to civilization may find it to be effective in conveying a sense of isolation at the very least.

The title of this novel is a subverted reference to Robert Frost’s poem ‘Stopping By the Woods on a Snowy Evening’; where Frost speaks of the woods as “lovely, dark and deep”, here we are given an alliterative opposite. Polson weaves a solid narrative using aspects of Joseph Conrad’s Heart of Darkness, the basis for the film Apocalypse Now, giving it a dark horror, somewhat steampunk and certainly more American spin. Lumber was far more important in America post-civil war than ivory would ever be. Barlow finds Curt’s camp devastated by greed and ambition, men twisted by Curt’s vision and the work of Curt’s second in command, Dr. Scheller, an engineer and inventor.

This is a relatively easy read that is hampered only, in my opinion, by too much focus on Barlow’s reminisces and not enough on the situation at hand. Edmund Curt himself appears only briefly and Dr. Scheller almost not at all, and one feels there were opportunities missed for some far more grandiose villain scenes than are presented. Our visitation with The Colonel, a man so driven by religious fervor as to be dangerous, is also all too brief. Chalk it up to the first person narrative, but I felt the scope of the story could have been larger, focusing as it does almost solely upon Barlow. That said, however, Polson’s writing itself is quite good, his descriptions vivid. When Barlow meets his colleague, Olson, he states, “Otto Olson had a face that looked like a thin strip had been sliced out of the middle and the remaining halves shoved back together.” A fantastic image deftly composed and indicative of the rest of the story’s style.

Whether Polson meant it to be explicit or not, the book paints a grim picture of technology during the infancy of the Industrial Revolution. It does not necessarily condemn the technology itself outright, but certainly highlights man’s ability to twist it towards dark purposes. Scheller’s devices and machines that begin as a means to make logging more efficient, evolve into engines of horror that almost literally strip the men at the camp of their souls. Even before the team reach the camp, alluding to his past in the Civil War, Barlow states, “By the end of the day, I would once again be under those trees, but this time marked for life and waiting to die in a hell made with the machines of war.”

Man’s inhumanity to man is not new territory for a writer to cover, but Polson does the job well enough. Barlow’s struggle to maintain a semblance of sanity when everything around him is going to hell and Otto Olson’s eventual growth from lily-livered craven to a man with a bit of sand in him are juxtaposed against characters who have fallen so far down the well they can no longer see the daylight. The frontier was a brutal place full of brutal men and many found it difficult to hold onto their values or far too easy simply to try and create new ones. With virtually no law or government comes opportunity to create what one will out of what one has, be it an edifice to horror or a utopian playland. Unfortunately it all too often begins as the latter and rapidly spirals into the former.

Perhaps it was Barlow’s former tragedies that help him move through this landscape of insanity without losing too much of himself. He wears the scars of his past on his face in both a literal and figurative sense and perhaps the parts of him he had thought lost to those events were not so much gone as forgotten. His decisions are certainly informed by a core of, if not morality, then at least a well developed sense of right and wrong. Ethical certainty in the face of moral ambiguity can be difficult at best. Stripped of consequences, more than one person has found it difficult to distinguish the left-hand path from the right-hand path.

Loathsome, Dark and Deep treads a path well worn by books that have come before, but it is a path of adventure and excitement nonetheless. Those looking for more gratuitously visceral fare under a horror label may be slightly disappointed, but if it’s a dark adventure with a strong protagonist you’re looking for, this novel delivers. Reminiscent of, if somewhat less graphic than, early Jack Ketchum (specifically Ketchum’s first novel, the Sawney Bean-inspired Off Season), Loathsome, Dark and Deep is a good piece of historical horror set against the backdrop of the forest, dark and deep.