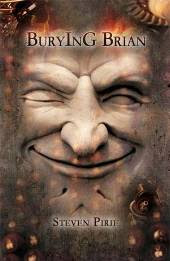 Belial has hoodwinked God into going down to earth again—and now God is trapped in Mrs. Tippings head, while Belial starts The Judgment of the World. And it’s up to Brian—and the Gravediggers of Mudcaster, to save mankind dead and alive from hell. Because of course, Belial doesn’t play fair. And everyone is guilty, even if it is sweet old Mrs. Pemberton, whose sin is stepping on a garden snail...

I didn’t know what I was getting into when I asked for the review copy of Burying Brian, Pirie’s second novel from Immanion Press. I’m not a horror book reader, and my daughter thought maybe I’d bitten off more than I could chew. But the back copy is very accurate in calling this a “gentle comedy”, even if a dark one. Sure, there’s Pestilence and his horse, both hacking and coughing their way through the story and covered in weeping sores, but one feels more like they should call the humane society for the creature and make a Calamine bath for the incarnation than to run away screaming.

I started the book without reading the back copy, and felt totally lost. Reading the back copy helped provide a frame for the story and then the pieces fell into place as I read. The setting is so intrinsically English that as someone who’s never been to England the detail is invaluable in painting the picture of an English village, but it also made that much more to keep track of. But that’s just another reason to read the book again.

The book is written with an incredible amount of detail, almost too much detail, it seemed at first. After the first two pages I thought, “There’s no way I can wade through 200+ pages of this”. There are what seem to be incongruously accented words in the first few pages. There are also a few sentences that either are awkwardly structured or have typos that were missed in the proofing/typesetting for the book. As a very grammatical reader this was distracting, having to stop and go back to see what I had “missed” or interpret what the sentence was really saying. As I got used to Pirie’s writing style, this was less distracting. The detail does level out after the first few pages and the word accentuation decreases and seems more appropriate to the story.

I found the book to be a relaxing read, not something one generally associates with apocalyptic Judgment Day tales. In fact, this book was so relaxing to read I had a hard time reading more than 10-12 pages at a time because I would be so relaxed I’d want to go to sleep. This was definitely not because the story was boring, but Pirie’s writing rhythm lulls the reader, much as the citizens of Mudcaster are lulled by the everyday presence of gods who are meter maids and gnomes who open doors to other places and times—and push unwilling parties through them, bridges go under streams, and bingo numbers have the ability to bring the world to an end. And yet it all seems so believable.

The book abounds with satirical metaphors and similies of Biblical and Revelational concepts, interpreted very uniquely. Christ’s Temptation in the Wilderness is replaced with Brian’s Visit to Hell and the Sampling of the 7 Deadly Sins (for how can a Savior relate to sinners unless he’s experienced their sins?). The Four Horsemen romp through the story as well, but Pirie’s horsemen are siblings, and the children of Mr. Grim, the Gravedigger’s Union President.

There are also allusions to the first advent story all through the book, but Pirie makes it very clear that this is not a retelling of the first advent (although he does make one wonder what really happened back then...).

Brian makes an unlikely hero; in fact he’s more of an anti-hero. And he certainly would not have been a hero if the gnome hadn’t pushed him through the outhouse door. And yet, his very reluctance and unsuitableness are exactly what help him succeed, partly because he doesn’t know any better, but also because of his simple belief in the correct order of the universe. This makes Brian a very relatable character because I could picture myself in the same type of situation and feel like I could muddle through just the same.

Pirie has taken two seemingly incompatible concepts—horror and gentleness, and images and themes that could be written in ghastly terms, and wrapped them in the flowers and the aura of a quiet English village. By the time he’s done, it feels like The Judgment is an everyday affair and that escaping it is really quite easy, even accidental. All in all, Burying Brian is a charming and entertaining read.

Just curious, is there any relevance to there being a large 'B', a large 'I' and a large 'G' on the front cover?

Yeah, I was wondering that. Big Brian? Maybe we can get Steven to come over and explain it to us.

Many thanks for an interesting review, Carey. It's great to read a non-horror, non-British perspective...

Paul, the cover art was done by musician Lucas Swann, and as far as I'm aware the large letters are just decorative rather than meaningful (unless Lucas saw some 'BIG' reference in there that I wasn't aware I'd put in!). But you're not the only one who's asked me that...

Would it be fair to say that this is in the same realm as Good Omens?

Dot - yes, in the sense that both are interpretive Judgment/Apocalypse stories.