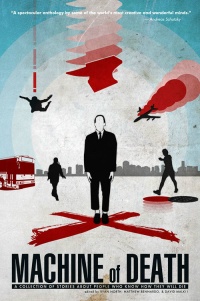 If you had the opportunity to find out the manner of your death, would you take it? That’s the shared theme of the stories in Machine of Death. All it takes is a drop of blood, and your fate is printed out on a small piece of paper. Your fate could be CANCER, an ACCIDENT, or even NUCLEAR BOMB. However, the answers are decidedly vague. For instance, CANCER could mean that yes, you die of cancer. But will you be old? Young? Or will someone else with cancer kill you? Maybe someone with the astrological Cancer sign will cause your death. The ambiguity of the predictions is frustrating and scary. And how do you live your life to the fullest after finding out how you’ll die?

This anthology was inspired by an episode of “Dinosaur Comics” by Ryan North in which a green t-rex mentions how cool it would be if you could go to the doctor for a blood test that would tell you how you would die. Machine of Death was shopped around for a couple years, but as no publisher would take it due to the number of unknown authors who contributed, the editors finally decided to self-publish, setting up Bearstache Books.

Although Machine of Death has a rather dark theme, not all of the stories reflect that tone. The first story, ‘Flaming Marshmallow’ by Camille Alexa, a girl is excited for her sixteenth birthday; that’s the legal age for using the Machine of Death. Popularity is decided by manner of death—“Burners” are cool, as are “Chokers.” Anything involving a CRASH will get Carolyn in with the most popular girl in the school. But SICKNESS and OLD AGE will have you sitting at the boring table until graduation. Carolyn has a crush on Brad Binder, whose slip read FLAMING MARSHMALLOW. Even though Carolyn’s friend Patrice ridicules Brad’s cause of death, Carolyn secretly thinks he’s still awesome. Where will Carolyn be sitting tomorrow after her trip to the mall’s Machine of Death?

The Machine of Death introduces one more way for kids to ostracize one another in high school, a time that’s hard enough under normal circumstances. But it also gives the unpopular kids a way of fitting in if their deaths are deemed “cool.” Before they know how they are going to die, the “No-Knows” are shunned by the “Knows,” especially by those with exciting deaths. The more horrific your death seems, the higher up in the social network of high school you are. Death has taken the place of clothes, shoes, looks and affluency in determining popularity.

‘Starvation’ by M. Bennardo shows the horrors of war as two men, Dalton and Johnny, find themselves stranded in the jungle after their helicopter goes down. Dalton signed up for the military after his slip told him HOMICIDE; Johnny is supposed to die of STARVATION. While trying to survive in the jungle with barely any food and water, they each start thinking of their deaths. Is Dalton going to die by Johnny’s hand, or will Johnny starve first? Or does HOMICIDE mean that Dalton will die trying to kill Johnny before Johnny kills him first?

Paranoia permeates this story, from Dalton’s death dilemma to Johnny’s fevered dreams as he lay sick and hungry. Dalton goes for help, but will he come back for Johnny? A little claustrophobia adds to the story as well; Dalton leaves Johnny in a pit with no way out while he goes for help. That way, Johnny can’t sneak up on him. The outcome is completely different than either of them suspects.

Throughout this anthology, the Machine of Death is debated by characters as being immoral, unnatural and evil. Should anybody know how they’re going to die? Is it right for parents to have their children tested? And if a child is tested, should it be at birth, or even in the womb? The Machine of Death has added a new dimension to the abortion debate—whether or not to abort a pregnancy if the child is destined to die a horrible death.

In ‘Miscarriage’ by James L. Sutter, a young couple has endured the miscarriages of two children, one of them at eight months’ gestation. Now Annie is pregnant again and she and her husband Ryan have decided to have their unborn baby tested. If the baby’s slip said MISCARRIAGE, they would terminate the pregnancy themselves since it was safer for Annie than having another miscarriage.

Another area of contention is in telling children how they will die. The “death talk” has now taken the place of the “birds and the bees” talk. If a child is to die by drowning, will the parents make sure the child has swimming lessons, or never let the child near the water?

Tommy’s parents had him tested as a child, but never told him, and Tommy has never had the desire to have himself tested as an adult. In ‘Friendly Fire’ by Douglas J. Lane, Tommy is a member of the Unknown Future Liberation Front, a group that hides behind masks and destroys public Machines of Death with hammers and other weapons. The group decides that one machine at a time isn’t enough, and make plans to blow up one of the machine’s factories.

Tommy’s parents had also had his little brother tested, and after finding out the answer, practically made the boy live in a bubble. Their over-protectiveness couldn’t help Davey, though. Because of this, Tommy has sworn he will never get tested. But his mother calls the night before the planned bombing, and lets him know that his slip said FRIENDLY FIRE. Knowing he’s about to head into a battle of sorts, this revelation troubles him deeply. Nobody knows about the bombing except the group’s members—is this the FRIENDLY FIRE that will kill him?

The machine is always right, even though it’s vague. There is no changing your fate, and you never know when it’s going to happen. It will always be a surprise. But in ‘While Trying to Save Another’ by Daliso Chaponda, exact dates are given to some people along with their causes of death. Called EDs, many join support groups to help cope with this terrible knowledge. Others actually embrace knowing when they will die, and have parties the night before to say good-bye to their friends. Timothy falls in love with Isma when they meet at an ED support group. They find out they are to die on the same day—will they die together? At the end, Timothy is left to decide his own fate—but is the decision really in his hands?

There is a story by Brian Quinlan that made me laugh out loud in this anthology; however it’s also the shortest—the title is longer than the story. I won’t reveal the title or the story; otherwise, everything would be given away; however, if it makes you laugh, then you have a twisted sense of humor like I do.

Every story in this anthology captured my attention; there are thirty-four stories in all, and each one is illustrated. Machine of Death is an incredible idea for an anthology, and each of the stories is very well-written and engaging. It may be odd to say I enjoyed a book about death, but actually death is not the forefront of most of the stories. Morality, mortality, fear, love and sex are just a few of the underlying themes throughout this anthology, which make Machine of Death more than just a book of dying; it’s also a book about living.

This sounds like so much fun! I'd heard of the collection but wasn't sure I'd like it; after reading this review I'll check it out. I'm really curious about the really short one.

I think this is one of the best anthologies I've ever read. I hope it gets more buzz; I hadn't even heard about it until I had the chance to review it. Check it out; it's definitely a fun anthology to read.