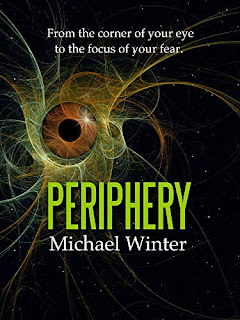 Upon receiving my copy of Periphery, I immediately turned it over to read the blurb on the back cover. There I learned about John Tate, and how “one summer afternoon he returned home covered in blood, ranting about bizarre creatures hiding in plain sight and declaring his intention to move out in order to protect his wife and son from the horrors now stocking him.” (sic) (my emphasis)

It was not an auspicious beginning.

I have nothing against self-publication as a concept. I think, in fact, there are some excellent arguments in its favour, especially given the myriad of opportunities available via Amazon and other outlets. With no third parties involved, it can give the author full control, allowing for greater freedom and creativity, especially in the horror genre. But this is one of the main reasons the practice has its detractors: the simple lack of proof-reading and editing. And oh, God, did Periphery need an editor. With every passing page it begs for one in an increasingly shrill and plaintive voice, crying out in anguish for a proof-reader, a draft revision, Grammarly, anything. “Edit me!” it wails. “By Lovecraft’s xenophobic ghost, edit me!” And by the second time the protagonist referred to his daughter’s healing skin “graphs” I was ready to cry with it. There was an unseen supporting character whose name I believe was meant to be “Leonard,” but since two of the three times he was mentioned it was spelled “Lenard,” I honestly have no idea.

It’s one of the many things that puzzle me about Periphery. Another is why in God’s name the main characters don’t just tell people about the monsters surrounding them. The whole premise is that the world is filled with Lovecraftian wildlife that hide in plain sight, disguising themselves as innocuous assortments of garbage or patterns of bark on trees. They’re basically invisible unless you are shown how to see them. But here’s the thing; it takes multiple characters the space of about thirty seconds to learn to see these creatures, and once you’ve learned it becomes impossible for the monsters to hide.

So, one of the main characters teaches his family to see the creatures, which attracts said creatures’ attention, resulting in a massacre. One character is subsequently arrested for multiple murder and the other goes on the run from the law. But why in the name of Nyarlathotep do said characters not just bloody show the monsters to law enforcement? The monsters are everywhere, it is literally a matter of saying, “Okay, see that newspaper wrapped around the lamppost? That’s its tail, and those flakes of rust going up the post itself are scales…” to make them visible. I have a lot of trouble understanding why the arrested character did not stand up in court and say, “Monsters killed my family, your Honour. One of them is in the jury box right now, if you just look at that weird pattern of woodgrain and then the spiralling shadows… yeah, you got it. Can I go home now?”

Okay, yes, arguably pointing out the creatures also attracts their attention, thereby putting anyone who learns to spot them in danger (hence why the family was killed). But when it becomes clear that the creatures are planning world domination anyway (and that was clear somewhere around page 50), isn’t the point kind of moot? Wouldn’t saving the world be a hell of a lot easier with the cops, the National Guard, the bloody United Nations on your side? Yes, fine, don’t show your family if that’s such a concern, but maybe reaching out to the local branch of the Armed Forces wouldn’t hurt. When the protagonists finally did give in and start recruiting, life got considerably easier for them, so I am honestly puzzled as to why they didn’t do it before.

On that note, for some reason Periphery is marketed as Lovecraftian horror. The question is why. The author has obviously put a great deal of effort into creating an entire ecosystem of bizarre monsters that hunt squirrels and slaughter families with equal aplomb. Creaures with names like bilantu and squim and fidelaxe and quintaloc… none of which are from Lovecraft. It was fun and creative and interesting and original, and it was completely bloody jarring when something started chanting Cthulhu fhtagn in the last 20 pages. In some ways Winter did himself a disservice by forcing Lovecraft’s name into the mix, because in almost every way it was a completely original horror story.

But perhaps most disconcerting of all was the novel’s bizarre story structure. At one point while reading the book, I turned to my husband and said, “So, a race of alien beings from another dimension are opening a portal to this world with the intent of taking it over. The main characters are now racing to stop them by destroying one of the coils that powers the portal. Oh, and a wildfire is raging in the grasslands, completely cutting off the city. At what point in the book would you say I am?”

He guessed, rather reasonably, that I was near the end.

Readers, I was less than a third of the way through.

The first act of Periphery rocketed forward at a breakneck pace, leading up to a point that would have made for an excellent overall climax. It felt like that first 130 or so pages should have been pared down into a novella or short story, or else expanded into a full novel. And instead it… just kept going. The action pretty much stops in act two, with all the urgency disappearing as the main character is arrested, and the ensuing conflict results in many unanswered questions about the influence, power, and limits of the pseudo-Lovecraftian creatures. Then act three takes off again, but throws a bunch of spanners into the works. A formerly good minor character turns evil (which would have actually been a great plot point if it had been built up, if his motivation had been previously visible, or he’d even had a real character in the first two acts), a formerly evil minor character is redeemed (which, again, would have been great… except he’s redeemed and then pretty much disappears, playing almost no part in the ensuing climax), two of the main characters fall in love so abruptly I read back to see if an attraction had been hinted at any point.

It all builds up to the ultimate confrontation between good and evil, where a major twist is the main characters realising that the best way to keep their minds safe from the creatures’ influence is through music. They sing to themselves, loop songs through their heads, even set all their dialogue to music. You see, the monsters are beings of chaos, so the idea of melody is inherently alien and repulsive to them. And this would have been fine, a reasonably logical plot point that led to some interesting bits of dialogue and scenes… except it is exactly how the cartoon series Adventure Time concluded.

I don’t think Winter did it on purpose. As I mentioned before, the idea makes perfect sense, and I have no trouble believing that more than one writer on this planet happened to think of it. But it is kind of hard to get swept up in the action when all you can think is “With Jake the dog / and Finn the human / The fun will never end / Ad-ven-ture time!”

So, this is the point at which, given everything described here, you might expect me to begin ranting about how much I hated this book. And the tragic thing is… I didn’t. I did not hate Periphery. There were aspects of this book that I truly enjoyed. I liked how it threw us right into the action, with the opening scene of the protagonist being dragged into a hostage situation. I liked some of the characters. A lot of the dialogue was fun (one line, “Hard to take ‘we’re all going to die’ seriously when crooned to Row, Row, Row Your Boat.” honestly made me laugh out loud). The action described in the climax was well-described and really pretty riveting. The monsters were creative and gruesome (which still raises the question why the hell Winters kept trying to jam Lovecraft in there, when he is clearly more than capable of creating his own mythos). I liked the fact that when two of the characters first discovered the existence of the creatures, they didn’t sound the alarm or run to the papers, but, being university ecologists, started doing field observations of them with the intent of writing an academic paper, because of course they would. I liked the description of their field work—threw me right back to my own days doing field work at university. There are some really great parts to this engine. It’s just unfortunate a lot of them are put together upside-down or backwards and stuck in place with Elmer’s glue.

To conclude, Periphery is a bundle of missed potential. There’s a decent story with some engaging characters and solid action here, but it’s hidden under multiple typos, grammatical errors, bizarre plot choices, and chaotic, slipshod narrative structure. One has to dig deep to find the gems, and I fear most readers might find it not worth the effort. Winters has the potential to be a pretty decent novelist, but he is in desperate need of both an editor and a book on story structure. I truly hope he gets them.

With all that said, dear readers, I leave you with this:


With Tate the drunk
And Bill the vagrant,
Iä, Shub-Niggurath!
Per-i-pher-y!
Posted by Djibril at 14:12