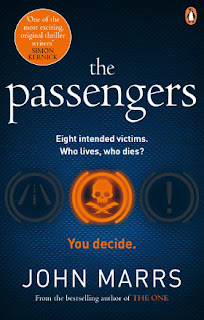 At the outset of The Passengers “the government has pledged England’s roads will become the world’s first completely autonomous network, with plans to ban all manual vehicles within a decade.” (37) A Level 5 vehicle, the most automated, is completely governed by artificial intelligence. With no gas pedal, brake pedal, or steering wheel, the “driver” has little to do once the vehicle’s destination is set. Occupants of these vehicles, regardless whether or not they sit in what used to be the driver’s seat, are referred to as “Passengers,” hence the book’s title.

The opening chapter introduces Claire Arden, an expectant mother. Claire’s first indication that something is amiss comes when her vehicle takes a detour from the programmed route. At first, Claire is unconcerned, reminding herself that autonomous vehicles will sometimes deviate from the planned path to avoid traffic or construction delays. But Claire’s worse fears are vindicated when the vehicle informs her that an alternate destination has been chosen. This is followed by the ominous pronouncement, made by an unfamiliar voice, that “‘two hours and thirty minutes from now, it is highly likely that you will be dead.’” (9) This scenario of autonomous vehicles being re-routed by a mysterious outside force is repeated with several additional Passengers.

We are then introduced to Libby Dixon, who has been selected to serve on a Vehicle Inquest Jury. The jury’s role is to assess the facts related to accidents involving driverless vehicles in order to assign blame. These inquests take place once a month, with four government-appointed members as well as one member of the public randomly selected for a one-week term. Libby finds the inquest process frustrating. She feels her viewpoint is not being listened to, and has the sense that the leader of the inquest, Member of Parliament Jack Larsson, doesn’t care what she has to say. Furthermore, she notes a disturbing pattern: regardless of the circumstances, the vehicles are very rarely deemed to be at fault.

The inquest’s proceedings are interrupted by one of Jack’s assistants, who tells him something important has come up. He projects news coverage of the Hacking on one of the wall-mounted television screens. Subsequently, the Hacker begins to interact with Larsson and the other members of the inquest jury.

The Hacker plays out a sadistic game in which the jurors, and the public, are asked to vote on one Passenger to kill right away, and subsequently, one Passenger to be spared. The eight hijacked Passengers include a refugee seeking asylum, an aging actress, a homeless man who was once gainfully employed, a husband and wife riding in different vehicles, a woman fleeing an abusive relationship, a pregnant woman, and a disabled war veteran. The process of deciding who should be sacrificed, and who should be saved, raises thought-provoking questions about societal assumptions, biases, and prejudices—all of which play into the selection of the sacrificial first victim.

Subsequent discussions amongst the jury about which Passenger should be spared spark spirited exchanges. Should they favor a younger person, because they have more of life to live? In the case of the husband and wife, who have children, should the female parent automatically get the nod over the male parent? Should Claire’s pregnancy be taken into consideration, since saving her would essentially save two lives, rather than one? These and other issues are debated as the inquest jury is forced to make an impossible decision based on incomplete information.

A substantial chunk of the novel is devoted to a less-than-three-hour period between the time the Passengers initially get into their vehicles, and the culmination of their journeys. While these chapters maintained a high level of tension, I felt that the subsequent portion of the book seemed to drift, and would, in my opinion, have benefitted from a sharper focus and tighter plotting. As well, some of the revelations near the end of the book seemed to contradict the information in the earlier chapters surrounding one of the Passengers in particular.

On the plus side, the information about driverless vehicles and the scenarios involving the Hack felt authentic and plausible, a credit to the extensive research Marrs did while preparing to write the novel.

While autonomous vehicles are a main theme of The Passengers, social media also plays a key role. As the hijacking escalates, a social media expert named Cadman marches into the inquest room, accompanied by his team. Cadman’s arrival was pre-arranged by the Hacker some time ago, leading us to believe the events of the day were meticulously planned far in advance. Cadman is there to follow social media trending in response to the jury’s needs as well as answering the Hacker’s questions about public reactions.

Some of the public response is callous, like the hashtag #KillThemAll appearing over 100,000 times. One individual posts a comment, “Why can’t it continue? It’s like watching a soap opera. Good work Hacker!” (159) and there are many other harsh and uncaring posts. Like the information about autonomous vehicle technology, the portions of the novel portraying social media reactions are believable, even if they paint an unflattering image.

Though the book’s topic matter is serious, The Passengers also contains humor. Aging and hard-of-hearing actress Sofia convinces herself that she’s simply on a reality television show, Celebs Against the Odds. She makes snide remarks to her dog Oscar about how the other Passengers are over-emoting, while simultaneously expressing the hope that appearing on the “show” will breathe life back into her flagging career. Marrs also weaves in humor in the chapter introductions. One snippet is a clip from a web site that shows the odds of survival for each Passenger, and invites people to place bets. Another of the chapter intros is “Which Passenger Would You Be?”, a quiz that would enable users to determine which of the Passengers they most resemble.

Though I didn’t note a reference to a specific calendar year in which the events are occurring, it's clear that based on today’s technology we aren’t very far from a time when the scenarios described in the book will become possible. As The Passengers illustrates, there are many important issues to be sorted out before the proverbial rubber hits the road on the autonomous car issue. How much control should AI take? What priorities should it be programmed with when faced with a possible collision with a pedestrian or another vehicle? These and other questions need to be answered—and The Passengers suggests that it would be best to take an active interest in the process. Otherwise, like Claire, Sofia, and the other hijacked Passengers, we may find ourselves helpless captives hurtling toward a destination not to our liking.
Posted by Djibril at 15:08