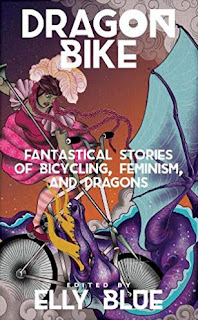 Elly Blue’s Dragon Bike: Fantastical Stories of Bicycling, Feminism, and Dragons is part of a new crop of anthologies crowdfunded through online platforms such as Kickstarter, enabling small presses to more easily print diverse new content and pay their contributors. It is also the sixth annual volume of genre stories edited by Blue focused on bicycling and feminism. This is a slight book of fifteen short stories, all sharing the same prompt of bicycles and dragons. Each author, however, takes it on in their own direction, with some stories playful, some dramatic, and some in-between.

A number of the stories take the whimsicality of the prompt to heart. M. Lopes da Silva’s “Witchcanix,” for instance, takes its start from witches who enchant a special bicycle for their queen, only to unexpectedly imbue it with the life force of a real dragon—a dragon who is shocked, and not pleased to say the least, to find that it has woken in the shape of a bicycle rather than its accustomed living form. Alice Pow’s “Bootleg” has a protagonist who steals parts from automated factories and is working on building the “perfect” bike; the only dragon in this story is the “DragonCycle” logo on one of the stolen parts. On the other hand, Gretchin Lair’s “What is a Girl Without a Dragon?” takes a turn towards magical realism: Caitlin, a young foster girl isn’t interested in being a part of her new family until she finds a bicycle in their garage—a bicycle that is also a dragon. “Dragon” has its own personality as it goes with Caitlin on adventures outside and is a comfort after visits to her therapist and with her biological mother. Eventually, the time comes for Caitlin to leave, but not before entrusting the care of Dragon to another fosterling, who will hopefully find comfort in her turn.

One of the most stand-out and inventive stories is Jennifer Lee Rossman’s “Chen D’Angelo and the Chinese-Italian Dragon.” This story takes place on a generation ship mid-way through its voyage, with its inhabitants getting by through habit; nonetheless, they have lost...something. Chen and her moms have a pizzeria in part of the ship’s Chinatown, but their restaurant is about to close. One of the defining features of the restaurant is its mural of a Chinese-Italian dragon, which gives Chen an idea to save the family business and maybe the spirits of her fellow passengers: with her friend Georgia, they build a dragon costume and concoct an urban legend of a dragon aboard, embellishing the story through social media. Soon the “dragon” is a sensation, and visitors return to the pizzeria. In the end, Chen isn’t sure that they have saved the restaurant, but she is sure that they have recovered some old-fashioned wonder. Joyce Chng’s is another science fictional adventure, but slightly more down to earth: “’Til We Meet Again” is about a yearly dragon-motorcycle race and the budding friendship (and hopefully more), of two of its contestants, the ragtag Meiki and the wealthy Leizhu. Though Meiki ends up taking second-place to Leizhu, the pair agree to see each other again at another race. This story was one I wished could have been longer; though their world is drawn in broad strokes, the charming individuality of both girls shines through, and I’d love to know what happens at their next meet.

One story, Paul Abbamondi’s “Storing Treasures,” is told as a two-page comic spread. Told with no words or dialogue, it shows a dragon flying with a bicycle who is attacked and pierced by arrows. The dragon makes its way to its home cave, where it meticulously removes the bloody arrows before healing and presenting the bicycle to its child. The sweetness of the story is belied by the shocking, inexplicable violence, and the medieval imagery of the bowmen on a castle is at odds with modern bicycle. And yet: In our too, too violent world, how is this not evocative of every person seen as a “monster” by the mainstream, when in reality they are just another person trying to take care of their family?

As is not uncommon with hyper-focused themed anthologies, the novelty of the prompt of “dragons and bicycles” wore thin over the course of reading; I found it easier to read Dragon Bike over time rather than in longer sessions, though that isn’t how I generally prefer to read for fun. The stories themselves were all well-told and ingenious; many of them would have been individual stand-outs in more varied anthologies, but here they tended to blur a bit—which is a danger of the form and no slight to either the writers or the editor. This was a delightful anthology, and highly recommended for anyone who needs some cheerful reads at the dark of the year.
Posted by Djibril at 12:34