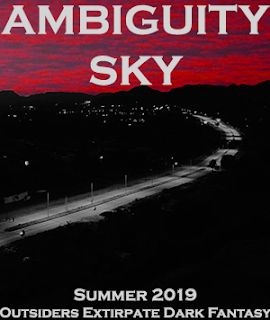 One of the oddest publishing stories of 2019 was the brief resurgence of Ambiguity Sky after an eleven-year hiatus—a return which came and went so quickly, it was painfully easy to overlook. Long-time fans might remember this magazine, which ran from 2000-2008 with a focus on dark fantasy and Lovecraftian aesthetics, and ceased publication abruptly after editor Rhea Chidiebube accepted a full-time job managing a local Nigerian-American cultural outreach program in Detroit. Even after that program was shuttered due to budgetary cutbacks in 2015, Chidiebube showed no inclination to return to Ambiguity Sky, or to the science fiction/fantasy community in general, turning her attention to political activism with a side of cupcake recipes on Twitter.

In January 2019, she announced plans to relaunch Ambiguity Sky with a special “Outsiders Extirpate Dark Fantasy” issue, contingent upon a successful crowdfunding campaign. “Who doesn’t feel like an outsider?” she wrote in her introductory post. “Humanity has a natural tendency to divide itself into groups, factions, us vs. them, insiders vs. outsiders. I want stories which truly capture that feeling of alienation, exclusion, loneliness, and disconnection. I want the voices of the dispossessed and disgruntled, the ones who feel left out, pushed away, ostracized. Give me tales of standing outside the door and being uninvited from the party.”

The response was enthusiastic, and the crowdfunding campaign successful, hitting stretch goals for extra authors, a print edition to go along with the digital version, interior art, and even an ebook collection of the magazine’s previous issues. Ambiguity Sky opened for submissions on March 1st and closed on March 31st, racking up hundreds of submissions by the end. On July 1st, the “Outsiders Extirpate Dark Fantasy” issue went live on the Ambiguity Sky website… and that’s when things got weird.

Physical rewards from the campaign, including promised contributor copies, were never sent out. The ebook collection of previous issues never materialized, and Chidiebube ceased posting updates, both to the campaign page and on Ambiguity Sky’s website. It was as though as soon as the issue went live, Chidiebube—who had apparently been running the entire process singlehandedly—lost all interest and had no intention of fulfilling any further requirements. Within days, she’d deleted her social media and public contact information. Several weeks later, Chiediebube issued refunds to her backers, without any further explanation or elaboration. To further confuse things, everyone involved in the issue reported payment, including authors and artists, so it’s not clear just what was going on behind the scenes.

On August 1st, 2019, the website went dark, taking the “Outsiders” issue with it, leaving behind innumerable questions and a great deal of confusion. Was this some sort of performance art? A political statement? Did Rhea Chidiebube attempt a glorious return, only to go down in flames? Was this a bizarre attempt at money laundering? Only one person knows… and she’s not talking to anyone. Repeated attempts to speak with her have gone unanswered in the months since.

However, even though the website no longer exists, the Internet remembers everything, and so copies of Ambiguity Sky, rescued from oblivion via the Wayback Machine, still make the rounds. Naturally, I had to take a deeper look at this fleeting phenomenon. With nearly two dozen short stories and flash pieces making up the table of contents, it’s beyond this column’s purview to address every offering, so I’m covering a selection which seemed most representative of the contents.

First up, we have “By the Teeth of Your Skin,” by Val Calente, a sharp-edged work of visceral horror, about a genderfluid werewolf who spends the night of the full moon clawing at their own skin to reveal something darker and angrier underneath. There’s a rawness to the prose, and an unsettling ambiguity to the ending which will leave readers wondering just who, or what, the unnamed narrator is at heart.

Compared to that, “By Thy Name I Know Thee,” by Ike C. Malen, is far more upbeat. It starts off as your stereotypical urban fantasy procedural, featuring a hard-boiled detective with magic powers—he’s a leprechaun whose pot of gold has run dry—who accepts a job from a femme fatale, only to run afoul of an old enemy. But in this setting, an unspecified American metropolis, names have power. R. Stiltskin is an expert at that game, and he doesn’t play fair at all. A fun story whose ending, while clever, doesn’t resonate with the theme as well as it could have.

April Duluth’s “Third Door on the Left” feels like a return to Ambiguity Sky’s earlier roots, with its Lovecraftian aesthetic and its focus upon a hapless traveler—in this case a woman driving home for the holidays who encounters a blizzard and must seek shelter at a roadside motel—who stumbles across an unspeakable horror. With nods to Psycho and its evocation of the uncertainty of traveling through unfamiliar territory, this story will have readers making sure every door and window is securely locked before they go to bed… especially the bathroom door.

Despite its groan-worthy title, “Allah Be Seein’ Ya” by Sabreen Farooq is a brutally honest examination of Islamophobia in contemporary America, as seen through the eyes of a Muslim woman who’s stalked and terrorized by her new small-town neighbors, who might not even be human. Determined to find a peaceful solution, she’s ultimately forced to fight for her very life. More psychological horror than outright fantasy, this story reserves its biggest twist for the end, which reframes the entire narrative in a new light and may necessitate multiple readings.

Joe Langdon’s “Nothing but Clowns” is definitely a callback to Ambiguity Sky’s splatterpunk days. It’s a gore-soaked, unapologetic mess of a story whose unlikeable hero, a frustrated introvert, succumbs to his darkest impulses at a comic book convention, only to be confronted by the ultra-edgy anti-heroes he idolizes. With its inclusion of sexual assault and graphic violence, this isn’t for the faint of heart, and may even be the least pleasant offering of the lot.

Luckily, we then get “An Empire of Regret,” by Greer Mathis, which uses delicately crafted prose and a poetic sensibility to depict a post-apocalyptic world inhabited by the now-sentient virus which wiped out humanity. With its fable-like structure, this story straddles the lines between science fiction and fantasy, especially with its suggestion that history has, and will always, repeat itself.

The last piece worth discussing is Ariel dos Santos’ “You.” Told in second person, future progressive tense, it casts the reader as the protagonist, carrying them through an increasingly bizarre chain of circumstances as they read the story of their own inevitable demise. “You will turn the page,” it says, “and skim the next few lines, wondering just where this is going.” It’s the sort of story which breaks the unspoken rules of narrative, risks offending the reader, and ends in mid-sentence… and it may be the perfect story to represent this entire oddball issue. Because “Outsiders Extirpate Dark Fantasy” feels both like a challenge to the genre and a bold statement.

Most notable is Chidiebube’s choice to select only previously unpublished authors, explicitly rejecting established writers and familiar names in favor of those she quite possibly considered industry outsiders. It’s safe to say, though, that we can expect interesting things from some, if not all, of the contributors.

Ambiguity Sky’s return might have been brief, but this issue, in its inexplicable weirdness and inconclusive existence, may well linger as an artifact of the cultural landscape. Well worth checking out, if just to participate in the experience.
Posted by Djibril at 16:30