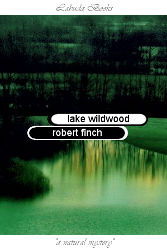 This slim novel, published posthumously from the notes of long-retired and recently deceased author Robert Finch, is billed as “a natural mystery,” and indeed bears many of the hallmarks of a crime or noir story (although as I’ll argue, I don’t think it succeeds as either). With a cast of characters straight out of Thoreau, a narrative that can’t decide if it’s bleak realist or supernatural horror, and choppy prose that veers wildly from rich, velvet poetry, via overwritten identity crisis, to Tolkeinesque naivety, this book ultimately disappoints, and does no service to Finch’s reputation.

All the action takes place in this under-developed area around the eponymous lake, which is situated in a fictional, posh and residential part of central California. The characters are a mix of wild cliché and Twin Peaks fuck-fest. Isidore is a retired monk, living a reclusive life in this privileged community, engaging with others only rarely, but clearly the most and only competent person there, and one we’re constantly sure will save the day. Lupus Patton is an eccentric rock star, currently laying low during a period of “creative differences” from his fellow band-members; apart from some trademark “wacky” behavior and heavily spooned-on arrogance, Lupus is the most boring and undeveloped character. Keavey Newell is a gourmet chef and frazzled mom, taking a break without her family for a week or two; she clearly needs the time to recover her mojo, but spends the whole time feeling guilty and resisting the temptation to flee back to her family (ironically, less so once things start getting scary). Gilroy Brook is a burnt-out CEO of a company that specializes in buying up and asset-stripping dotcom start-ups, on an enforced sabbatical while recovering from a nervous breakdown, who has the instinct to take charge whenever possible, but no one else has the inclination to follow. All of these characters have slept with at least one person among the major or minor characters, some with almost everyone.

The settings, including the off-season gated community, more than half of whose condos are currently unoccupied, the idyllic but dark and dangerous lake itself, and the undeveloped and isolated woods on the far shore where most of the fear and suspicion seem to be directed, are almost characters themselves. The Lake Wildwood community is a little pretentious, but she’s adolescent and so still learning her own voice, so we forgive her. She’s lonely, has too few friends, and those show less loyalty to her than she does to them. The lake is pretty, welcoming, polite, but we never see what’s below his surface and so we can’t trust him. The woods are drunk, dangerous, foreign, an outsider, a character to be feared from a distance by our protagonists rather than one whose POV or voice we ever experience firsthand.

The first half of this slender novel teases us with the idea of what crime can be committed at all in this panopticon-like, incestuous community. We are delivered clues in the guise of over-written studies of identity and loss, character development as scene-setting rather than literary narrative, bed-hopping not as titillation or romantic comedy but as a series of set pieces on a valance-sheeted stage. Once we finally learn the crime, it is so outrageous and incomprehensible that a paranormal origin seems inevitable, especially given Isidore’s esoteric learning and Keavey’s increasingly desperate rational atheism. The second half of the book then proceeds to unravel the mystery itself, taking the tone of a noir thriller, but without the pathos and the proceduralism the genre requires. Disappointingly, not only does the book fail to fulfill any of the genres it teases—it’s not noir, the mystery is barely a crime, the paranormal never materializes, the story is far too plot-driven for literary—but it fails either to satisfy as a reading experience or to surprise with its unconventionality or slipstream content.

At the end one really wonders whether Finch wrote this book, or whether his estate recruited a hack or an agent to turn half-written notes into a story to capitalize on his name. Either way, Lake Wildwood is a pretty terrible piece of work to inflict on the world and, even more so, on the poor man’s reputation. Can we pretend this didn’t happen?
Posted by Djibril at 20:10