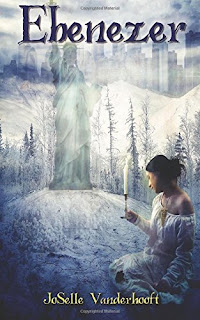 For a while there it felt like the blazing summer was never going to end, and I was craving something suitable for colder temperatures—ideally something cozy to read so that I could at least pretend it was cool out, or that I wanted hot chocolate. JoSelle Vanderhooft’s Ebenezer suited that mood very well; as you might imagine from the title, it’s a retelling of Charles Dickens’s classic A Christmas Carol, revised for a very modern sensibility.

This genderswapped novel takes place during the 2008 global recession, transporting the miseries of Victorian England to the modern United States. Ebenezer, or Eb, is 29 and hates her job at a debt collection agency, and has just suffered a catastrophic break-up with her girlfriend, Marley. On Christmas Eve, she is visited by the spirits of the Past, Present, and Future, which are here portrayed as the personifications of Utah (where she grew up), New York City (where she lives now), and the ‘genius’ (the old-fashioned word for ‘spirit’) of Time, which is represented as an hourglass. The story proceeds as you would then expect it would, only at a slant. The Future spirit isn’t there to prevent Ebenezer from dying unloved and unmourned by all who knew her, but is instead there to prevent Eb’s suicide. Eb then reconciles with her family, who are as relieved to have her back as she is them, and she also reconciles with Marley, though they do not reunite romantically. The bow on the present of this story is when Marley apologizes to one of the people she has to call, but she also explains how the person can avoid receiving hectoring phone calls in the future.

Vanderhooft plays very well with genre and format here. This is a novel, but chapters are divided and titled as Acts and Scenes. This is a familiar ghost story, but the “ghosts” are places and memories rather than the dead. Transforming Ebenezer and Marley from business partners divided by death to a couple that has recently split transforms the main character’s emotional waking from that of, well, a scrooge, to that of someone who is trying to live a happier and more balanced life. Unfortunately, this last was an element that I as a reader struggled with; Ebenezer is a pitiable and sympathetic character caught between a difficult family, a miserable job, and the dreams she has long cherished that seem so out of reach. In short, she is most of us. Transforming the original Scrooge’s pennypinching into actual poverty, or his abusive practices as a business-owner to the abusive practices of an equally abused employee (Eb doesn’t want to yell at people on the phone, but she also doesn’t want to be fired for not making her quota), seems more problematic than not. That said, the decision to make Ebenezer sympathetic is one that encourages a rereading of her “redemption” at the end— that redemption is as possible, even necessary, for the workaday world and those in it as it is for Dickens’s beloved characters.

Vanderhooft’s cleverness does wear at times. I thought the formatting of the novel as a kind of play had only mixed success, given that Ebenezer’s frustrated ambition was to be an actress rather than a playwright. (In Dickens’s original, the chapters are presented as “Staves”, or musical notations, to go along with its title of a “carol.”) Similarly, having two spirits be the personifications of places, and the third as a personification of time, felt incredibly uneven. Nonetheless, the strength of Vanderhooft’s writing is to carry your investment in her characters onwards through the rest of the story, even when her choices sometimes give you a pause.

A recurrent theme of the book is the battle of mental health, one that is foreshadowed early on through young Ebenezer’s witnessing her mother’s suicide attempts, and which is signalled by the alternative future in which Eb has killed herself. Eb’s bitterness with life could also speak to dealing with ongoing depression, but that may be more subtextual. Similarly, various characters’ depressions with Christmas speaks to how collectively we as a society half-dread the holiday, even if we still love it.

Ebenezer is a lovely soothing read, one well suited for the coming season. Vanderhooft’s characters are lively and sympathetic, each in their own ways speaking to our contemporary concerns of queerness, ableism, and economic anxiety. As far as textual transformations go, this one may be a bit slight, but it nonetheless is successful.
Posted by Djibril at 15:16