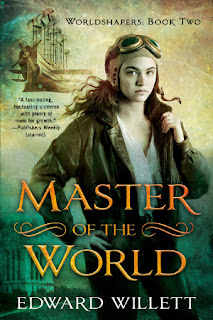 Prolific author Edward Willett, who has authored or co-authored more than 60 books, has released the newest entry in his Worldshapers series, Master of the World. Like Worldshaper, the first book in the series, Master of the World was published by Daw Books. Billed as portal fantasies, the Worldshaper books whisk us off to a universe in which Shapers, who were trained by an alien known as Ygrair, can form and populate worlds within a massive construct known as the Labyrinth. Protagonist Shawna Keys, to whom we were introduced in Worldshaper, continues her quest to collect the hokhmah, or knowledge of how each world was Shaped, from as many of the Shapers as possible. Only in this way can the Labyrinth and all of its millions of inhabitants be spared from the Adversary, an alien antagonist who is diametrically opposed to Ygrair and all she represents.

At the start of Master of the World, Shawna, having just passed through the Portal to the world adjoining hers, quickly learns that much of the technology and geography of this new land is inspired by various Jules Verne novels. Furthermore, though matters are currently at a stalemate, this particular world has been set up as a war game being played on a world-wide scale, where the forces of Prince Dakkar and the Principality of Raj are ranged against those of Robur the Conqueror and the Republic of Weldon. There is political intrigue aplenty, complete with spies, intelligence services, and active military forces.

Clearly, it will take some skill and maybe a bit of luck to complete the assigned mission. Unfortunately for Shawna, in passing through the Portal, she has become separated from Karl Yatsar, who served as her guide and companion in the opening book of the series. All she can do is go about her quest to find the Shaper, and hope that she will encounter Karl at some point in the process. As Shawna’s knowledge of the world she finds herself in deepens, she deduces that the Shaper is likely either Prince Dakkar or Robur. She must first determine which person it is, then try to convince him to yield the world’s hokhmah so she can continue her quest.

Shawna’s travels take her across this Verne-inspired world, using a variety of modes of travel, including submarine, helicopter, and the Terror, a hybrid vehicle that can travel through air, on land, and through or over water. Along the way, she must use her wits to keep her from harm’s way. Tension is maintained in part by the action, and in part by the unknowns. Will Shawna be reunited with Karl—and if not, how will she continue her quest? Will she learn more about her past, and why she can’t remember anything about Ygrair and the School? Will she be successful in acquiring the hokhmah of the world’s Shaper, whoever that happens to be? How will she win her way to the next Portal, and beyond that, the next world?

In the first book, Karl Yatsar took the lead, with an angry and bitter Shawna still trying to assimilate all the bad things that had happened to her and her world as a result of the Adversary’s interference. Now, without Karl to lean on, Shawna must fend for herself. I found Shawna’s character in Master of the World to be more likeable than in Worldshaper. In Master of the World, she’s gotten past her bitterness, and is more focussed on the quest. She has, however, retained her sarcastic sense of humor.

As was the case in Worldshaper, Shawna remains internally conflicted when her mission requires her to make choices which might cause harm to others. She also starts to question Ygrair’s methods when her encounter with the Shaper suggests that the alien teacher has essentially given Shapers the power to do what they wish with their creations, without imposing any kind of moral structure.

Shawna does not find this new world particularly welcoming to women. When she is brought aboard the Albatross by Robur’s forces, Shawna is informed that sailors think women are bad luck aboard a vessel. Prince Dakkar, when she meets him, does not seem much better. Within his palace, serving-women are garbed in skimpy attire, the better to serve as eye candy, and he displays amorous intentions toward Shawna. The world’s inhabitants are Shaped in such a way that they don’t see anything amiss with the culture or their role. They have also been formed to feel unquestioning loyalty toward their respective masters, Dakkar and Robur. Rather than a Bible, the moral code of this world is conveyed in a book entitled The Word of the Shaper. All of these factors heighten Shawna’s unease with the world as it presents itself.

However, this particular world’s unwelcoming attitudes toward women can’t prevent powerful female characters from prevailing. Characters like Belinda Hatteras, Lieutenant Commander of Prince Dakkar’s Flying Force, and Athelia Richelot, who possesses hidden talents in addition to her competent leadership of the Worldshapers Theatre Troupe, play important roles in the book.

Master of the World contains numerous references to Verne’s works, which put me at a disadvantage. Though I have seen a couple of movies based on Verne’s novels, I haven’t read any of his books. However, the lack of familiarity with Verne’s writings didn’t prevent me from enjoying Master of the World, although I would expect that some of the references that went over my head would be easily picked up by someone who has greater familiarity with Verne’s writing. Still, there was no need to feel left out. The book contained multiple references to books, movies, and television that I was familiar with, including allusions to Star Trek, C.S. Lewis’s Narnia chronicles, and the TV show I Dream of Jeannie, among others.

Willett engages in a fair bit of exposition, through the thoughts of Shawna Keys, in the opening chapter, but I felt this was necessary. Willett uses this opportunity to provide background information that would be essential for someone who hadn’t read Worldshaper to understand in order to pick up the story where it begins in Master of the World. Besides, it was a good, concise recap for those who might have read Worldshaper a few months ago and needed a quick refresher on what happened in the first novel of the series.

The novel is mainly presented in first-person narrative from Shawna’s viewpoint, although a handful of pages dealing with other characters are told from the third person viewpoint. This changing of viewpoints occurred without presenting difficulties for the reader. Events in the novel proceeded at a reasonable pace, although I found Shawna to be too self-conscious a narrator at times. Shawna’s mental asides injected levity, and allowed us to appreciate her sarcastic and at times self-deprecating sense of humor. Still, I personally might have preferred if the writing were tighter in spots. But that’s a relatively small matter, laid against the backdrop of what Willett is doing with this series, and is presented in the interests of giving the review an even-handed good-with-the-could-be-better perspective. All things considered, Master of the World was an enjoyable read, and I find Willett’s notion of the Labyrinth intriguing. The author has created an imaginary universe that provides almost unlimited scope to play with. It will be interesting to see, as the series proceeds, where Willett will take us next.
Posted by Djibril at 15:50